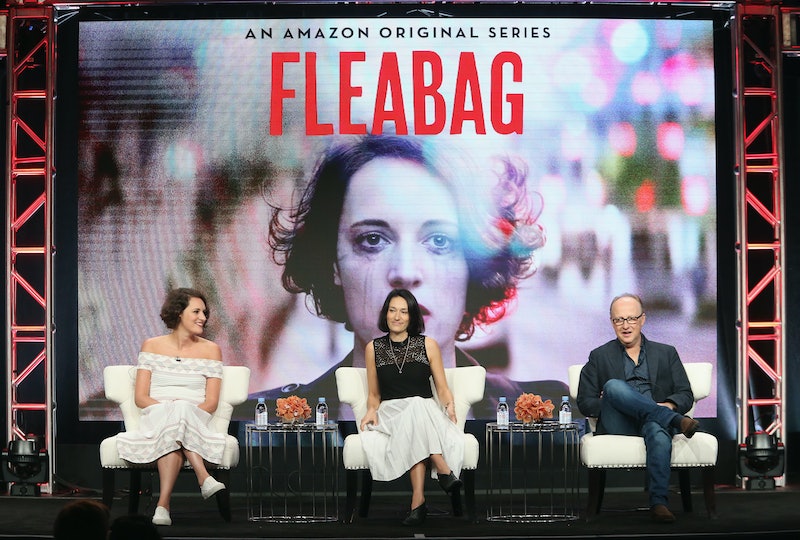 Fleabag is the story of one woman attempting to make her way through life in London while being extremely blunt and looking for intimacy. The new Amazon series, written by and starring Phoebe Waller-Bridge, is a welcome addition to the streaming service's collection of original programming, but it wasn't always a TV show. Fleabag started as Waller-Bridge's one-woman play, which she premiered during the 2013 Edinburgh Fringe Festival to rave reviews, eventually leading to a development deal to produce a television series based on the play. Of course, theater and television are two incredibly different mediums, so what are the differences between the play and TV versions of Fleabag ?

The biggest difference between them is the number of characters. For the theatrical piece, Waller-Bridge was playing one character, the titular Fleabag, and everything she told the audience — be it about her most regrettable hook-ups or the status of her guinea-pig-themed café — was filtered directly through her point of view. On the Amazon series, however, Waller-Bridge will be surrounded by other characters, from family members to love interests, who flesh out the story and let viewers see things from other perspectives.

But in both cases, Fleabag's world is presented as is — for better or worse. While the points of view may be different, the character the audience follows is very much the same, as is the character's relationship with the audience.

In an interview with BBC3, Waller-Bridge discussed her fascination with the audience and how she uses stories like Fleabag to try to connect with them emotionally. "How do you make an audience laugh in one moment, then feel something completely and profoundly different in the next?," Waller-Bridge said. "It was this tightrope that I wanted to walk with Fleabag." Since the one-woman show is able to directly communicate with the audience, the Amazon series breaks the fourth wall to spur a conversation between the character and the audience in a similar way.

"In theater, people come to you, or your characters. In TV, characters arrive in people’s living rooms, their kitchen tables, and are often even taken into bed with them," Waller-Bridge told BBC3. "It’s a very intimate way of communicating with an audience and a privilege to experiment with." The creator is putting real effort into ensuring that the show lives up to its theatrical origins not only with its story, but also its emotional and forward tone.

"The absolute ideal situation [is] that at the beginning you should feel she wants you there and by the end, that she wishes she hadn’t let you in," Waller-Bridge said of Fleabag's relationship with the audience. "A feeling I imagine lots of people have felt after spilling it all out to a stranger."

Fleabag tries to recreate the feeling of seeing a show in a small, intimate theater on screen. While Fleabag makes changes to make the story more television-friendly, such as adding more characters and using different settings, it's clear that Waller-Bridge has no intention of letting go of the intimacy and connection with the audience that made her original show so great in the first place.

More like this
A 'Bridgerton' Star Just Dropped A Major Hint About Joining The Live-Action Barbie Cast
By Bustle UK
What Makes A Sally Rooney Sex Scene So Hot?
By Samantha Leach
Drag Queen Drama 'Femme' Is A Fresh Take On The Classic Revenge Thriller
By Sam Ramsden
'Heartstopper's Kit Connor Revealed His Hopes For Season 2
By Nola Ojomu and Sam Ramsden
Get Even More From Bustle — Sign Up For The Newsletter