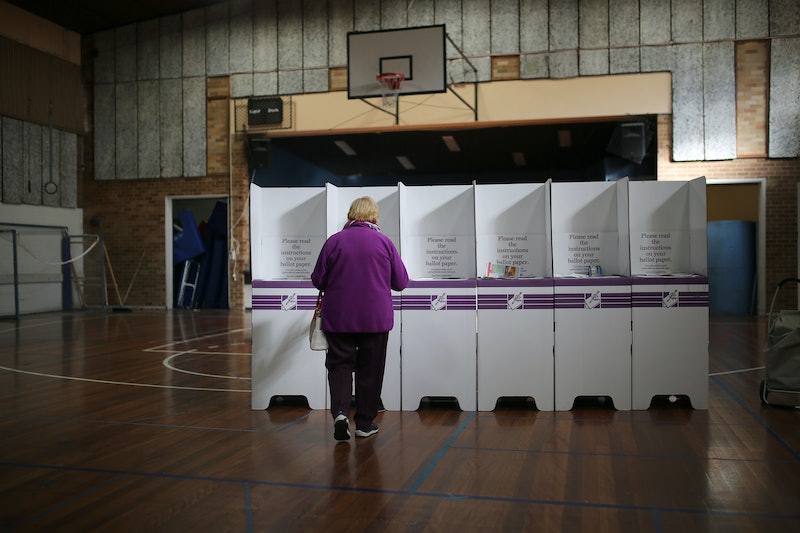 The general election is in full swing, and a common narrative is dissatisfaction with the major-party options. As more Americans than usual struggle over whom to vote for, it wouldn't be a surprise if more than usual were considering just not showing up to the polls. Voter turnout in the United States generally hovers between 50 and 60 percent for presidential election years and a measly 40 percent for midterm elections. People who stay home or don't leave work to head to the voting booth on Election Day have their reasons. But there are several counterarguments for why you should vote.

Bloomberg Politics created several graphics showing some of the more prominent reasons people didn't vote in the 2012 election, compiled from U.S. Census Bureau data. The graphics show that non-voters certainly cannot be lumped into a single demographic group. From logistical issues to technical difficulties to a lack of political engagement, respondents reported a range of obstacles to exercising one of their most basic democratic rights. Some of these can be easily solved, while others require working around complicated institutional barriers or persuading could-be voters that there's even a reason to get involved in the political process. While the right to vote is an individual's to practice or dispense with, here's how you can challenge the many arguments you may hear for not going to the polls.

Whether they couldn't get time off work, were out of town on Election Day, or had a disability, lots of non-voters reported not being able to get to the polls, according to Census data. Luckily, in most circumstances, you don't have to. The National Conference of State Legislatures (NCSL) provides a handy rundown of early and absentee voting options by state.

Every state allows for absentee ballots to be mailed in, though some states only allow people with certain accepted excuses, such as work obligations, a disability, or caretaking responsibilities, to do so. Early voting is another option in some states for people who can get to a relevant location and want to cast their ballot in person, but can't do so on Election Day. Check the NCSL's guide, linked above, to learn about options in your state.

Importantly, note that states have different deadlines for early and absentee voting. Check in with the U.S. Vote Foundation's state-by-state guide.

2. I'm Not Into Politics

Are you just not a "political person?" If you answered "yes" to that, please answer the following:

Do you care about your paycheck? Do you value the rights of people of color, LGBT individuals, and women? Do you have opinions about war? Is health care something you care about? What about taxes? Do you or your friends have children who you want to receive a quality education? Any thoughts on access to higher education?

If you answered "yes" to any of those question, you care about politics! You might not be interested in the "who said what about whom" of it, and might not be fond of how it's sometimes conducted, but when it comes down to it, politics involves issues that directly affect you and those you love.

If neither major-party candidate appeals to you, you might not have much motivation to hit the polls. A couple important things to consider here: First, you don't only have the opportunity to cast a vote for president here, but for your state's representatives in Congress, as well as governor and members of your state's legislature. The presidential election gets by far more coverage than down-ballot races, but when you think of how much responsibility congresspeople have over legislation, and how much power your state elected officials have over state and local laws, the importance of these elections is apparent.

Second, there may be more people in the presidential race than you're aware of. From third-party to independent to write-in candidates, there are more options than Hillary Clinton and Donald Trump. For example, the Green party's Jill Stein, the Libertarian party candidate Gary Johnson, and independent Evan McMullin are in the race and could shake up the results. Check who's on the ballot in your state here to see if someone jives with you.

Say you find a third-party, independent, or write-in candidate you're into. They can't win, right? Probably not — at least this time around; there are a plethora of obstacles in place for non-major-party candidates, especially at the presidential level.

But having your vote "count" or "matter" and voting for a candidate with a good chance of winning aren't necessarily the same thing. At a time of great dissatisfaction with politics as usual, making your dissension known and casting a ballot for the candidate who best represents the politics you espouse has value. It's not just an empty gesture of protest; if a substantial number of people vote third party, it could influence the major parties to budge in a different direction, and would help make a case for providing third-party and independent candidates greater access to media coverage, the debate stage, and campaign funding in the future.

5. Registration Is Too Hard

Some states have complicated ID laws and early registration deadlines, which can certainly make it harder for people to vote. This concern came to light when Ivanka and Eric Trump couldn't even vote for their father because, due to New York state voting deadlines, they hadn't registered as Republicans in time and couldn't vote in his primary.

Your best defenses against registration difficulties are: 1) know your states voting laws and registration deadlines, and 2) verify that you're still registered if you think you are. Rock the Vote has an awesome site where you can find out your registration status, get information on where and when to vote, and learn about your state's ID laws and deadlines.

6. The Weather Is Too Bad

Plan ahead. Bad weather on Election Day was one of the most common reasons people stayed away from the polls on Election Day in 2012, according to Census data. If you live in a place with rough November weather, perhaps early or absentee voting would be the best way to go.

7. Nothing In Politics Can Change

One hundred years ago, women couldn't vote. Just over 50 years ago, people of color were legally discriminated against. There is much left to do to create a fair country for people of color, women, the LGBT community, people in poverty, Native Americans, and more. If history tells us anything, it's that we can work toward a more just nation.

True, it's going to take more than voting — working with local advocacy groups, talking about issues with people in our communities, engaging in protest, maintaining pressure on elected officials to enact the policies we want — but having a say in who assumes positions of power is one of many tools at our disposal. And we need them all. Please vote.