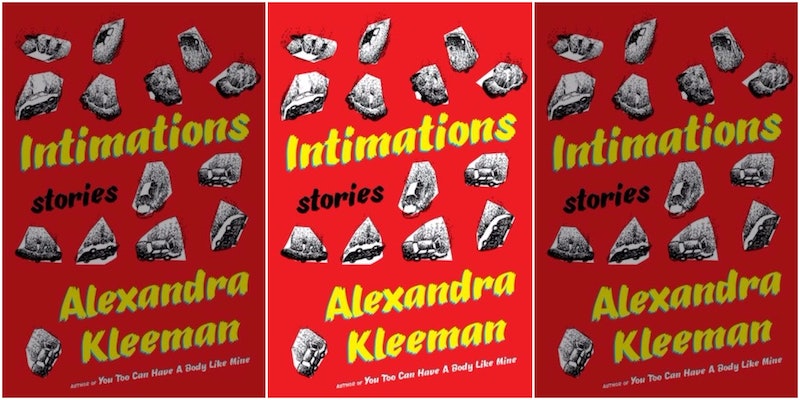 Most people don't like talking about death. Some of us prefer to ignore it completely, pretending it will never happen to us; others are fascinated by it and spend their time trying to understand it; and many define it through faith and spirituality, sometimes even managing to find comfort in it all. Regardless, these conversations are heavy and generally need a level of inner and outer thought that can be challenging and uncomfortable. Alexandra Kleeman's Intimations , however, is a great starting point for how to talk about life, and more specifically, death.

In this short story collection, Kleeman follows life from beginning, middle, to end. That is perhaps the only traditional part of the book, as she takes readers down unusual paths that are both parts abstract and pointed. She manages to tell a story, each and every time, without ever giving you a concrete meaning. The book itself feels more like an experience than anything else.

With that preface, it was interesting to see how Kleeman, whose other short stories in the book contain anything from armies of lobsters, a murderous suitor, and a nurse's costume, would handle the topic of death. Rather than grabbing readers by the hand, Kleeman gently leads the way in an eerie, tragic, but beautiful short story entitled, "You, Disappearing."

Without giving the entire story away — as it'd be a shame not to go through it yourself — I'll say that it centers on a world very much like our own within which an apocalypse is occurring. It isn't a zombie outbreak or war-torn world. In fact, as far as an apocalypse goes, it's quite normal, aside from the fact that random things just start disappearing.

I'm talking foods, plants, amusement park rides, even things like concepts and memories. The world becomes separated, which Kleeman makes clear by repeating throughout the tale, "There are two kinds of people." The first are those who live life without focusing on time or when it will end, and the second are those who are consumed by obsession over their demise.

It's admittedly hard not to obsess over death because there is no way for us to understand it. The only way we could really know is by asking someone who died, except, unfortunately, that's impossible. Why then should we obsess? Will it make a difference in the end, the amount of time we thought about it?

"You, Disappearing" is a tale not only of death but of fear and love. The main character is obviously and deeply in love with their former partner, oftentimes calling them just to make sure they haven't forgotten them, or their cat, Cookie. Kleeman's portrayal of love, driven by desperation and fear, is tragically realistic.

"Instead, I picked up the phone and pushed your number into it. I was always telling you about problems you couldn't fix, as though multiplying badness could dilute it.

There was nothing more to say. I hung up the phone. Sometimes I dialed you back right away just to hear you pick up and know that your hands were, at that very moment, resting on a chunk of plastic that threaded its way delicately to me over hundreds of miles of wire and cord. To know that even though your voice had disappeared, you had not yet. But recently I hadn't been allowing myself any callbacks. I was getting more afraid of the day when you wouldn't pick up."

It doesn't stop there.

"There had been times when I thought I might be with you indefinitely, something approaching an entire life. But then when there was only a finite amount of time, a thing we could see the limit of, I wasn't so sure. I didn't know how to use a unit of time like this, too long for a game of chess or a movie but so much shorter than we had imagined. It felt like one of those days when we woke up too late for breakfast and lay in bed until it was too late for lunch. Those days made me nervous. On those days we fought about how to use our time. You didn't want to live your life under pressure, as though we'd run out, as though it were the last of days. I'm not ill, you said. We aren't dying, we don't have cancer, you said. So I don't want to live like we do, you said. There are two kinds of people, and one of them will give up first."

Kleeman's brilliance shines through finding words for thoughts and feelings that feel entirely unique and then applying them to universal human fears and conditions. To think, love and death had so many extraordinary intersections.

Neither the book nor "You, Disappearing" suggest a specific way of thinking about life or death. What's clear, however, is that the main character, who's fixated on the end, seems much less happy than their former partner. Maybe that's Kleeman sending a message and maybe it's not. Perhaps the best way to think about death is not to think about it all or to accept it and move on. Think of it as optimistic, faithful ignorance. The power of Intimations, really, is that your interpretation on this, or any of the others stories, can be both radically different and just as valid.

What's clear is that Intimations is a book to talk about and a book to dive into.