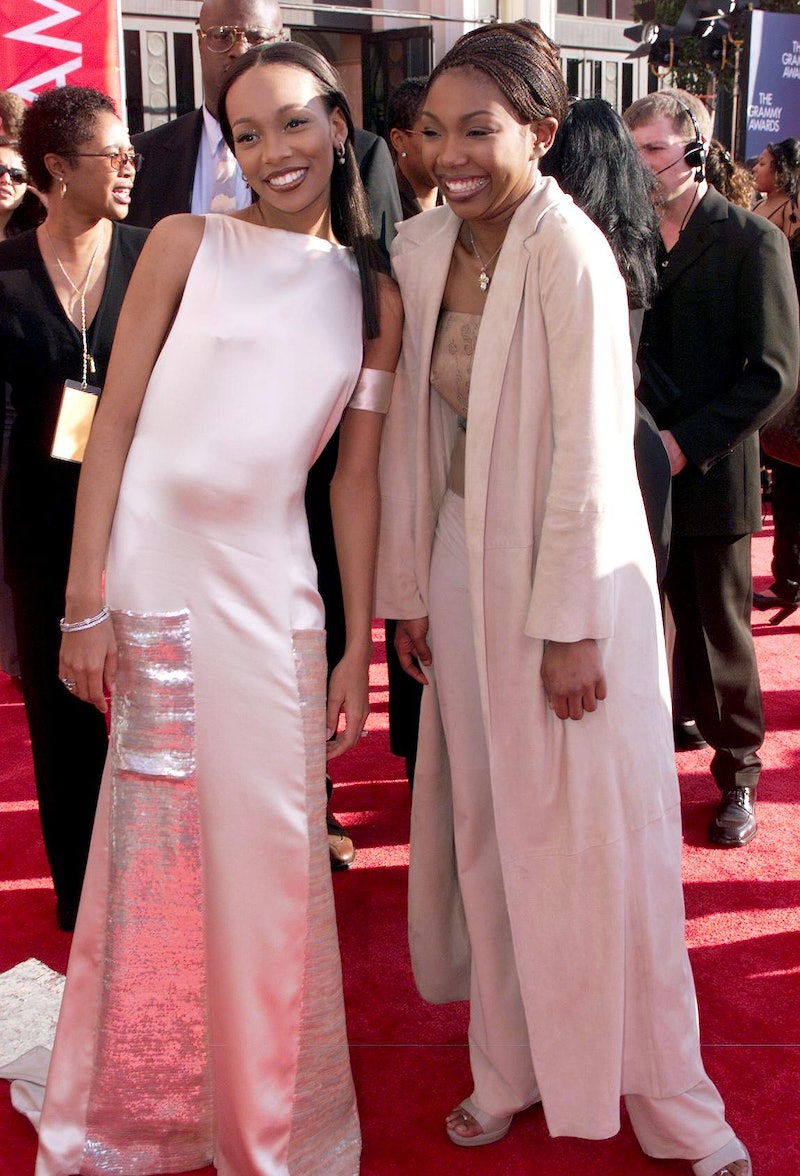 In news that will make every '90s kid feel nostalgic, Monica has been discussing her complicated relationship with fellow artist Brandy. The pair released "The Boy Is Mine" together in 1998, and went on to win a Grammy Award for Best R&B Performance by a Duo or Group. Their talent combined didn't go unnoticed, and, as far as I'm concerned, "The Boy Is Mine" is a veritable classic, and always will be. However, despite their successes, Brandy and Monica have allegedly been feuding for the past 18 years, and it doesn't sound like the grudge is over. Is a Brandy and Monica reunion even possible at this point? Will we ever get another "The Boy Is Mine?"

During an appearance on The Real, Monica talked about the alleged feud, and made it sound as though things were a lot more chill now. Speaking about a potential reconciliation, Monica claimed,

It's never been an easy situation, but the reason I would do it is because we are from a special elite group. It was her, Aaliyah, and myself. It was a very special time where each of us was individuals. We did our own thing, and we all made our mark.

Clearly, Monica appreciates her unique connection to Brandy, and the fact that their music is part of such an iconic era of R&B. Unfortunately though, Brandy seems a lot less interested in the possibility of a reunion, even stating in February 2016 in an interview with Entertainment Weekly, "["The Boy Is Mine" collaboration] was so long ago, I’m just in a different space. I don’t talk to Monica. We are on different paths."

In addition, it could just a coincidence, following the airing of Monica's appearance on The Real, Brandy shared an Instagram with some very curious hashtags. Perhaps the most important part of her post was when she said, "#IKnowTHEREALStoryThatEverybodyDoesntKnow#NewKeyOnKeyNewMeOnMe #MissSubstance #PositivityIsTheOneThingYouShouldNotFake." From the caps, I thought that perhaps Brandy's mention of The Real was referring to Monica's recent interview. But, while that might not be the truth, it seems pretty clear that a reunion won't be happening any time soon.

The duo did reunite in 2012 for a new song, "It All Belongs To Me," and it looked as though their feud was finally over. There are even some photos of Brandy and Monica hanging out together in 2012, appearing like a normal pair of friends. Sadly, their reconciliation seems to have been short-lived, which is definitely a shame. "The Boy Is Mine" was such a huge hit in the '90s. Brandy and Monica's styles and voices worked so well together that it'd be great to see the pair perform their single again. As Monica said on The Real, "The truth and reality of it is, the only Grammy either of us has is together."

Still, we don't know the full story behind this allegedly hard situation. At the end of the day, they both have a lot to offer as singers, solo or in partnership, and that's what matters most.

More like this
Monica Lewinsky Wants Beyoncé To Change “Partition” Lyrics Amid Recent Song Edits
By Grace Wehniainen
Now That 'Renaissance' Is Here, Let’s Revisit Beyoncé’s First Solo Album From 2003
By Grace Wehniainen
Josh Peck Shows Love To Jennette McCurdy After Her Shocking 'iCarly' Revelations
By Radhika Menon
Jennifer Aniston Just Gave Courteney Cox The Biggest Endorsement
By Darshita Goyal
Get Even More From Bustle — Sign Up For The Newsletter