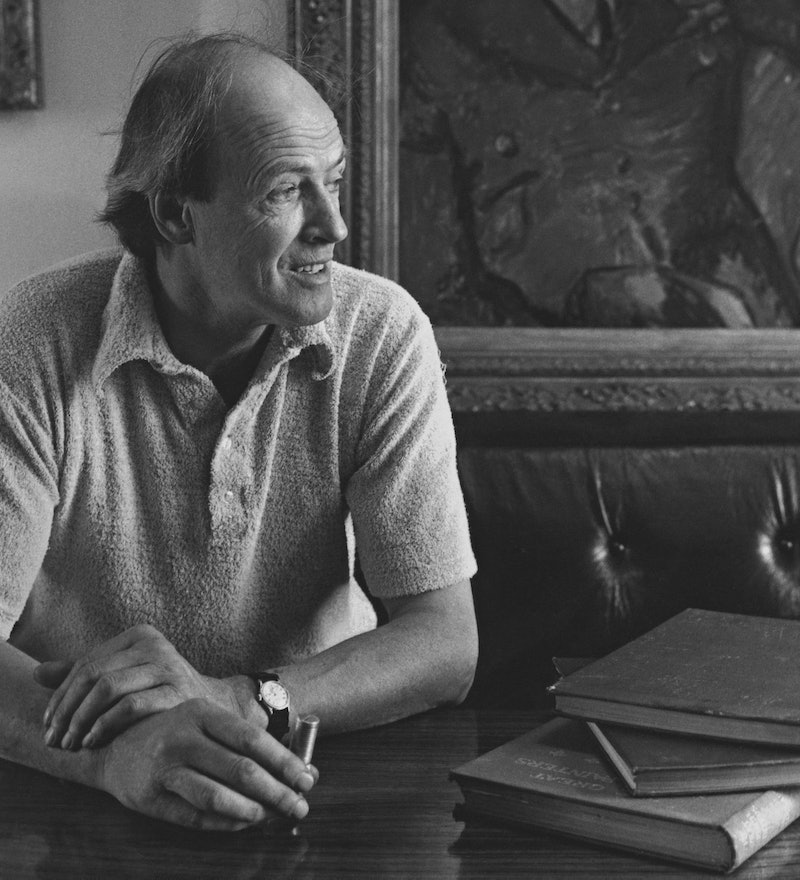 Today is the 100th birthday of Roald Dahl, the beloved children's author of Matilda, Charlie and the Chocolate Factory, The BFG, and more. Though he's been gone for nearly 16 years, Dahl's legacy lives on in his family, his books, the movies inspired by his work, and his letters.

Wait — his letters, you ask? Yes, Roald Dahl was a prolific correspondent, and for forty years, he wrote more than 600 letters to his mom, Sofie Magdalene. These letters — all written with his signature whimsy and dark humor — were preserved by his mom until her death. Now, you can read them in a new work of nonfiction from the author of Dahl's authorized biography.

In Love From Boy: Roald Dahl's Letters To His Mother, Donald Sturrock presents the chronology of Dahl's progression as a writer through these letters to his mother. Dahl began writing his mom at the age of nine, during his days at boarding school. He continued his correspondence during his time spent abroad as a Royal Air Force pilot, during his years spent working with Walt Disney in Hollywood, and into the decades of his literary success. The letters are an unfiltered glimpse into the wild imagination of the man who wrote about giant peaches, chocolate factories, and girl witches.

Unfortunately, the letters Dahl received from his mom have not survived the test of time, but Sofie Magdalene carefully preserved all of his writings. "My mother kept every one of these letters, binding them carefully in neat bundles with green tape, but this was her own secret." Dahl writes in his memoir, Boy. "She never told me she was doing it." The writer discovered the letters only after her death in 1967.

In Love From Boy, released Sept. 6, 2016 from Blue Rider Press, Donald Sturrock has collected these never-before-seen writings into a book that delves into the inner world of one of the world's most daring literary minds. Bustle is proud to exclusively reveal an excerpt from Love From Boy, which you can read below:

Roald Dahl is widely acknowledged as one of the very greatest children’s writers. Yet he was a strangely reluctant traveler on the road to that destiny. It was only when he was in his forties that he attempted to write a book for children. And, for many years before that, he appeared to have no aspirations to become a writer at all. He ascribed this sudden change of gear to a ‘monumental bash on the head’ he had sustained as a wartime fighter pilot in 1940. Crashing his plane in the Libyan desert, he believed, had only given him something to write about, but the resultant head injuries had also changed his personality, liberating his desire to write. The observation was perhaps disingenuous. For, while Roald did indeed show little interest in writing as a way of earning his living until 1942, he had since childhood, been practicing his craft in another context: writing letters to his mother, Sofie Magdalene.

The observation was perhaps disingenuous. For, while Roald did indeed show little interest in writing as a way of earning his living until 1942, he had since childhood, been practicing his craft in another context: writing letters to his mother.

These letters are remarkable. More than 600 in total, they span a forty-year period, beginning in 1925 when, as nine-year-old, Roald was sent away to boarding school and ending in 1965, two years before his mother’s death. Sofie Magdalene carefully kept each one, and most of their envelopes, holding on to them despite wartime bombings and many subsequent house moves. In his memoir of childhood, Boy, Roald movingly described how he discovered them:

“My mother…kept every one of these letters, binding them carefully in neat bundles with green tape, but this was her own secret. She never told me she was doing it. In 1967, when she knew she was dying. I was in hospital, in Oxford, having a serious operation on my spine and I was unable to write to her, so she had a telephone specially installed beside my bed in order that she might have one last conversation with me. She didn’t tell me she was dying nor did anyone else for that matter because I was in a fairly serious condition myself at the time. She simply asked me how I was and hoped I would get better soon and sent me her love. I had no idea how she would die the next day, but she knew all right and wanted to reach out and speak to me for one last time. When I recovered and went home, I was given this vast collection of my letters…”

Sadly, not one of Sofie’s Magdalene’s letters to Roald has escaped the vicissitudes of time. From the handful of her own letters to other people that have survived, one can see that she writes in a clear, lucid, elegant style, much like her son, though it is sometimes evident that English was not her first language. Yet, even so, her powerful, pragmatic, unshockable personality emerges strongly if only by inference, through her son’s correspondence.

Sadly, not one of Sofie’s Magdalene’s letters to Roald has escaped the vicissitudes of time. From the handful of her own letters to other people that have survived, one can see that she writes in a clear, lucid, elegant style, much like her son...

Sofie Magdalene was a remarkable mother. She was calm. She stayed behind the scenes. She sought no public acknowledgements she made for her family. Indeed it was not until Roald was an old man that he wrote about her directly – in Boy (1984) and in Memories with Food at Gipsy House (1991). But from the beginning of Roald’s writing career to the end, she was present in his fiction: whether as the anxious mother desperately identifying herself with her bomber pilot son in Only This (1942), or as the wise, imperturbable grandmother in The Witches (1983). She was a catalyst too – in ways she probably did not fully appreciate. As a young boy, Roald had been fired by her tales of Norse mystery and magic and by gossipy love of human fratility and weakness. As he grew into adulthood, he sought to return the compliment, entertaining her with his own stories and observations. Sofie Magdalene was Roald’s first audience, but she was also his unacknowledged inspiration to become a writer. One might say Roald’s own career as a storyteller begins in these letters.

More like this
Idris Elba & Tom Hollander Lead This Year’s Must-Watch Christmas Flick
By Maxine Harrison
Allie Rowbottom Will Have Her Feminism With A Side of Botox
By Samantha Leach
The 'Firefly Lane' Book Ending Teases Way More Tears To Come In 2023
By K.W. Colyard
'Bridgerton' S3 Teases Exciting Social Season For Penelope Featherington
By Bustle
Get Even More From Bustle — Sign Up For The Newsletter