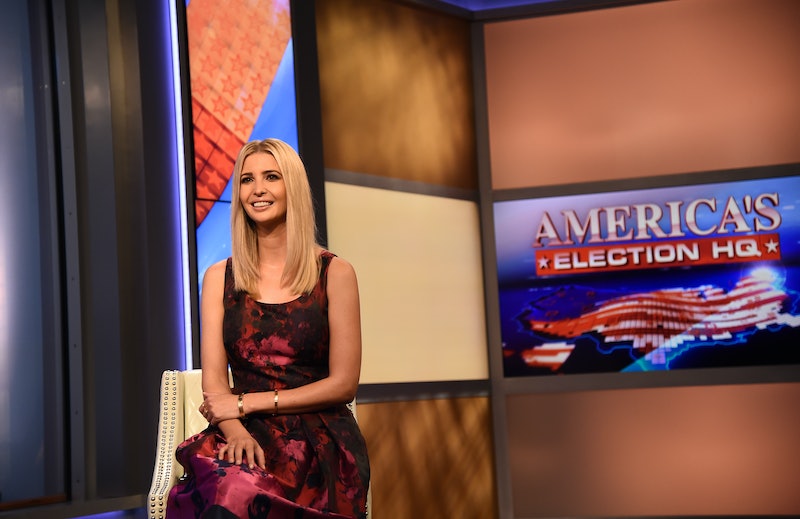 Ivanka Trump is taking charge on the campaign trail this week with a huge new policy announcement — one that's been met with a lot of criticism already. During a Iowa rally on Tuesday, Ivanka Trump renewed her push for paid family leave, and actually seems to have support from her father. "[Ivanka] is the one who has been pushing for [paid family leave] so hard: 'Daddy, daddy we have to do this.' She's very smart, and she's right," Trump said during his Iowa tour. Tuesday. Although the plan itself has flaws, it's still a big victory for progressives, and might actually bring about some lasting change.

The Trumps' plan includes a guaranteed six-week paid maternity leave that works through tax rebates and specialized savings accounts. In addition to daycare costs, families would be able to pay for private school tuition, healthcare expenses, and other family-related costs through new savings accounts just for dependents. Stay-at-home parents would also qualify for the tax deduction, as well as costs associated with caring for elderly relatives. The campaign says that the plan will be financed by cracking down on unemployment fraud, but the viability of that payment method is already under scrutiny.

Yes, there are reasons to be skeptical of the plan — the Trump campaign didn't provide a cost estimate for its implementation, it doesn't even mention the word "father" once, and it's pretty obvious pandering since it goes against Trump's entire message of anti-government assistance throughout the campaign.

However, that doesn't automatically mean it's bad, or that you can degrade Ivanka Trump, as many commenters have been doing online. Even shifting the focus to her arguably poor rhetorical strategy during various interviews on Wednesday doesn't really do any good, because it's getting so far away from the real issue at hand. If she's using her influence to push her dad to the left at all, that's a really good thing. Paid family leave is going to be much more easily achieved in the near future if the Republican party is finally forced to accept that it has widespread support, which will provide financial support to millions of families who really need it.

It's important to note that Hillary Clinton's plan offers fully twice the amount of time for paid leave, and that the only critique Ivanka Trump could offer when asked about Clinton's plan during a Good Morning America interview on Wednesday was that she has been in public office for decades and hadn't passed any legislation on paid family leave. Even still, pushing forward the bipartisan movement for paid family leave is a strong sign that some good might come out of this election — so don't be too quick to criticize Ivanka Trump.