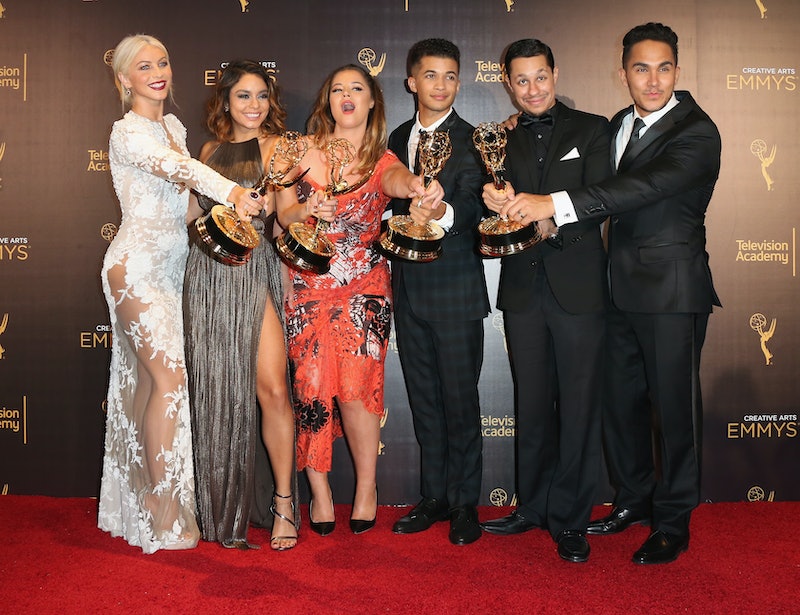 With so many amazing TV shows on network channels, premium cable, and streaming services, television-centric award shows are featuring some of Hollywood's best and brightest. Not only do you have multi-Emmy winning network shows like Modern Family vying against raunchy cable favorites like Inside Amy Schumer, you also have streaming series like Amazon's Transparent going head to head with Netflix's The Unbreakable Kimmy Schmidt. It's anyone's game this Emmys season, and you don't even need cable to watch some of the season's best shows. But what do you do if you don't have a cable hookup and want to watch the actual award ceremony for the 2016 Emmys? Don't worry — you're not doomed to check the results online. There are several ways to stream the 2016 Emmys, so you don't miss a minute of the action.

If you have a cable hookup and the TV to go with it, like a super fancy person, then you're in luck: you can watch the 2016 Emmys right from your TV when the show airs on Sunday, Sept. 18, on ABC. The red carpet begins at 5 p.m. ET, and the official show, hosted by Jimmy Kimmel, begins at 7 p.m. ET. So if you have a television with a standard cable hookup — or a generous friend willing to loan you their couch — you're sold. If not? Well, fortunately, you can still watch the 2016 Emmys — you just have to get a little creative. Here's how to watch the Emmys without a proper television:

It's 2016, which means that everyone knows that just because you don't have a cable hookup, doesn't mean you don't have access to a cable provider's password. If your childhood home has ABC, but you're living that Netflix/Hulu/Apple TV life, you can still borrow the password in order to access ABC's live streaming. ABC provides live streaming via their website to those who have the network included in their cable package already, so if you have a kind friend or relative willing to loan you that password, you're technically able to watch the 2016 Emmys live.

Get Creative With Live TV

Can't find anyone willing or able to loan you their password for the night so you can access ABC live? You have a few other options. You could purchase a SlingBox account, which allows you to watch TV live from your computer, essentially providing you with the same opportunity as ABC live. You can also head to the official Emmys website to watch Backstage LIVE!, which streams key moments from the red carpet.

Tune In The Next Day

However, if you're in no rush to watch the Emmys — or would prefer to watch them on a delayed schedule because Sundays are particularly busy for you — you totally can. One easy way to do this is with Hulu — for $7.99 a month, Hulu allows you access to most ABC programming the day after it airs. Though ABC programming is on Hulu, the entirety of the Emmys might not be. However, it's very likely that Hulu will post clips from the show — or at least the red carpet portion of it — the morning after the big event.

It stinks missing out on TV's biggest night — but fortunately, with these streaming tips, you won't have to miss any of the action.