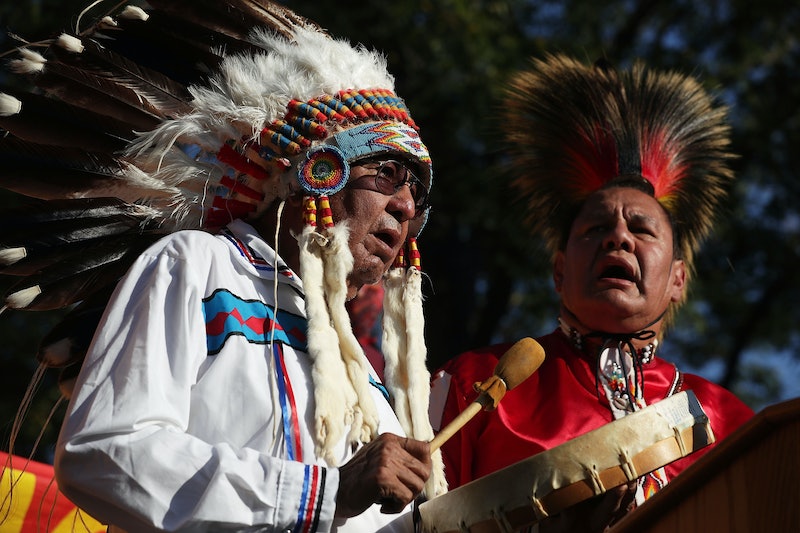 The Dakota Access Pipeline didn't come out of nowhere. The pipeline project — which aims to transport crude oil from North Dakota to Illinois while passing through South Dakota and Iowa — became public in July 2014. Supporters of the pipeline argue in favor of its economic benefits, like job creation and energy independence. However, the Standing Rock Sioux Tribe objected to the pipeline because it could affect the local water supply and damage sacred land. President Obama recently announced a temporary halt in pipeline construction, but that wasn't a true victory. The fight against the Dakota Access Pipeline has not yet come to an end, and the federal government's response to this issue reflects the historical treatment of Native American and indigenous people in the United States.

It's important to look closely at what the Obama Administration actually said in response to #NoDAPL protests. Shortly after a federal judge refused to grant the Standing Rock Sioux Tribe an injunction to stop construction on the pipeline, the Department of Justice, the Department of the Interior, and the U.S. Army released a joint statement last week. “Construction of the pipeline on Army Corps land bordering or under Lake Oahe will not go forward at this time,” the statement read. “We request that the pipeline company voluntarily pause all construction activity within 20 miles east or west of Lake Oahe.”

As anti-state violence organizer Kelly Hayes wrote, all this statement guarantees is further consideration of the issue. Additionally, this is really just a momentary delay, as Hayes points out. The federal government is creating the illusion of victory by asking Energy Transfer Partners — the company that owns the pipeline project — to voluntarily stop construction while everything is being discussed. The statement really only addresses a small portion of the pipeline, and construction on the rest of the pipeline has continued.

For months, the efforts of the #NoDAPL protesters — who come from various walks of life and from all over the country — were ignored, even as they set up camp at construction sites. Then, when people finally started paying attention, the North Dakota National Guard was activated. Multiple activists were arrested, and some were even bitten by dogs. Although Vermont Sen. Bernie Sanders and Green Party nominee Jill Stein have been vocal about the issue, not all politicians have been. Democratic nominee Hillary Clinton still hasn't addressed the issue, and has justifiably been criticized. And though it was the Obama administration that tried to momentarily halt construction on the pipeline, Obama initially glossed over a question he received about the DAPL while he was in Laos.

The Standing Rock Sioux Tribe and its allies made it clear what the pipeline's impact would be on sacred land; tribal officials have already indicated that burial sites had been destroyed, the Chicago Tribune reported. But the other major issue with the pipeline illustrates the ways in which anti-racism and climate justice intersect. Activists and critics of the pipeline have expressed concern that constructing this pipeline under the Missouri River is dangerous because if the pipeline were to burst, it would pollute the local water supply. As Native American activist Winona LaDuke wrote at the end of August, "the health of the Missouri River has been taken for granted."

This is not new. Native American and indigenous people have routinely had to fight for their land and their lives, and even when politicians promise to maintain treaties, something always seems to go amiss. What matters now is that we don't stop listening. The activists fighting the pipeline on the front lines of this effort need as much support as possible:

They're not just protesters. As many of them have pointed out, they're protectors.

They are protecting the land, the water, and their people, and we owe it to them not to look away like we have done historically.