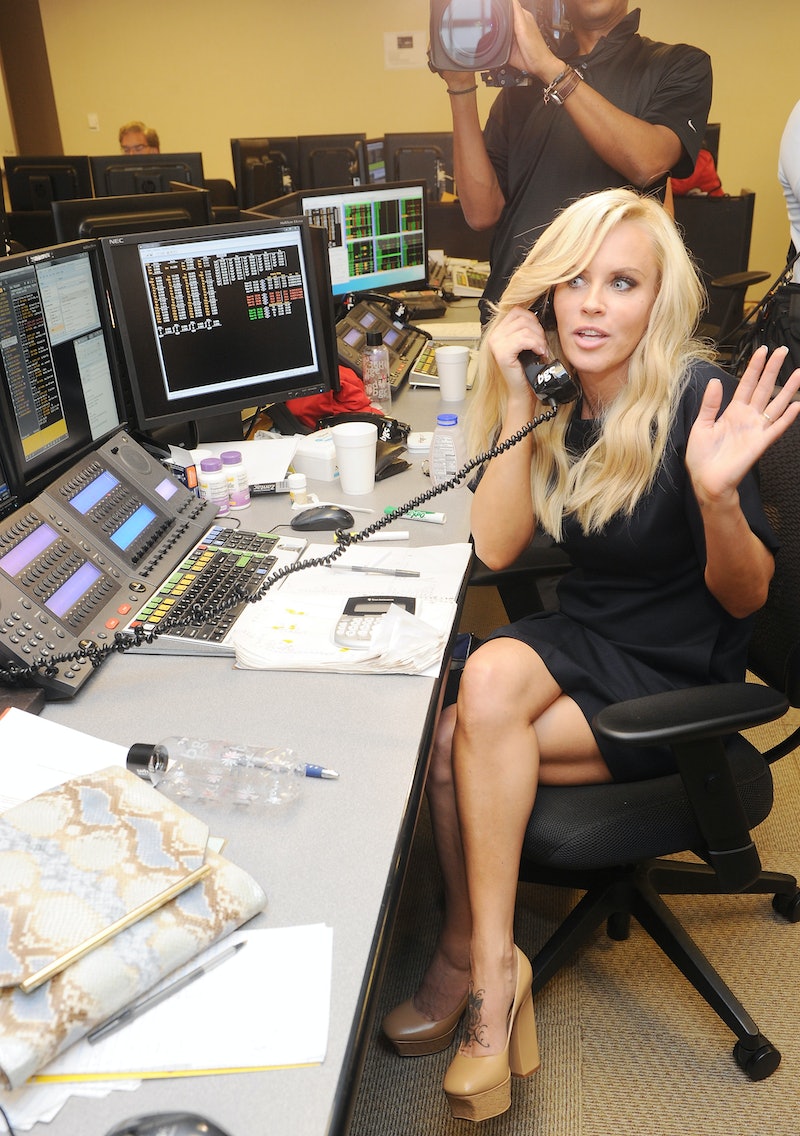 Facts just don’t seem to satisfy the anti-vaccination movement. And now, their conspiracy theories appear to be taking hold: A new survey finds that a whopping 69 percent of Americans have heard the conspiracy theory that doctors and the government continue to push vaccinations even though they cause autism and other disorders. And 20 percent believe it.

Even though people who won't vaccinate their children are, in my opinion, beyond reason, I do think those who oppose their opinions need to pay attention to their arguments, and call them what they are: Not arguments at all, but misinformation based on debunked studies. Because every time an anti-vaccine Facebook page gets more likes, or a "don't shoot up my kid" tweet gets retweeted, a vaccine-preventable disease looms closer.

The recent backlash to Jenny McCarthy's recent #AskJenny campaign seems like the start of a larger pro-health movement, but I'd argue the stream of snarky tweets doesn't go far enough. In case you missed the still-growing hashtag takedown, it all started when Jenny McCarthy tweeted, “What is the most important personality trait you look for in a mate? Reply using #JennyAsks."

When Jenny McCarthy, Kristin Cavallari, or Robert F. Kennedy, Jr. parrot a debunked study about vaccines and autism, or nickname their group the "anti-vaxx" movement to give a better soundbite, I take it personally.

Pro-science tweeters used this request to criticize Jenny's anti-vaccine views, tweeting back responses like "Someone who gets their medical advice from real doctors, not antivax cranks," and "Someone who is vaccinated." By now, #JennyAsks has taken on a life of its own, and is being used to solicit donations for the Red Cross and to condemn Jenny's anti-vaccine grandstanding. But as much as I appreciate these moments of snark mixed with activism, I think it's time we did more than roll our eyes and type "#JennyAsks."

When Jenny McCarthy, Kristin Cavallari, or Robert F. Kennedy, Jr. parrot a debunked study about vaccines and autism, or nickname their group the "anti-vaxx" movement to give a better soundbite, I take it personally. It's not enough to laugh about the silly "anti-vaxxers" and their potentially dangerous disregard for public health when infants from my home state are dying of preventable illnesses. Reasonable people need to stand up, or else the non-debate between valid science and hacks with blogs will continue.

I remember one of the first outbreaks of a vaccine-preventable whooping cough in my hometown of Richland, Mich. Richland is a tiny town with one bar, two gas stations, and a number of anti-vaxxers. In 2006, we were hit by a whooping cough epidemic that spread to the neighboring (and considerably larger) Kalamazoo.

Although the town escaped fatalities during this particular rash of whooping cough cases, I distinctly recall my mother debating whether we could go to public functions because she didn’t want her vaccinated children exposed to disease. Our church had to shut down childcare, as our school begged parents to get their children revaccinated for pertussis.

For good reason. Of the almost 300 infected people in my area, more than half were in school. And more than half of the whooping cough cases were in school-aged children, and another 10 percent were among infants, resulting in a handful of hospitalizations. My mother had us on a pediatrician’s table getting booster shots before you could say “TDAP,” but many parents did not follow suit, and our small town suffered through the first of many preventable waves of disease.

As memorable as this first outbreak was, it was a minor scratch on the now-tarnished record of preventable epidemics in the state that is home to my family and closest friends. In the past few years, Michigan has been crushed by outbreaks of preventable disease — a fact tied to its status as the state with the third-highest rate of vaccine refusal based on "philosophical" or "religious" factors. And these new outbreaks bring fatalities: There were 18 pertussis deaths in Michigan in 2012 alone, and most were infants under three months old. Pleading editorials have begged Michigan legislators to make "opting out" of vaccinations more difficult, so that the state can keep its head above the tide of measles, mumps, and whooping cough cases.

One of the "experts" often touted by anti-vaccine folk is Dr. Sherri Tenpenny. Like many of the vocal anti-vaccine "leaders," she claims to believe in her convictions, yet somehow needs a page-long disclaimer on her website to protect her from lawsuits. (Presumably because she knows unvaccinated children could die of vaccine-preventable diseases, and their parents could then sue her.) So, while the good doctor runs a health center and "speaks" for the "reasonable scientists" in the anti-vaxx camp, she can't be held liable for her claims. Instead, she profits off a movement that preys on worried parents.

Some of those worried parents happen to be celebrities, who, in turn, also use their fame to influence parents — with an added bonus. Celebrities like McCarthy and Kristen Cavallari also receive a huge publicity bump by framing the issue of vaccination as a “debate.”

There is absolutely no reason, in 2014, that I would be writing about Cavallari on Salon if she hadn’t announced this. Compare: It’s commonly misperceived that Jenny McCarthy got her slot on ABC’s “The View” in spite of her anti-vaccine advocacy, but in fact she rebooted her dormant career as a soi-disant “Mother Warrior,” reaching an entirely new audience and making herself marketable as a tough-talking mom who won’t fall for so-called “scientists.”

But understanding the motivations of non-famous anti-vaccine parents can be trickier. If we are to base our stereotype of them on celebrity endorsements, these parents are predominantly upper-class, often centered in LA, and are adherents to an "earth mother" sort of philosophy. But in reality, the parental anti-vaccine movement extends beyond the West Coast: Illinois has second-highest rate of parents refusing to vaccinate their children, and Michigan comes in third. This suggests that a more diverse group of parents has been listening to celebrity misinformers.

The rapid spread of misinformation across states and regions scares me as much as the infection outbreaks they will inevitably cause.

To my fellow concerned social media junkies, it's time to stand up for public health. Social media is the weapon of choice for anti-vaccine truthers according to a UNICEF study, so it should also be a weapon for scientifically accurate information and impassioned pleas for young parents to vaccinate their children.

Instead of simply laughing at Jenny McCarthy's idiocy, we need to keep crushing the anti-medicine propaganda with swarms of easily-accessible facts, like the Anti-Vaccine Body Count. Because as soon as the vaccination rate in this country drops below a certain point, the measles outbreak in New York will be the least of our worries.

And that's not a scare tactic — that's the truth.