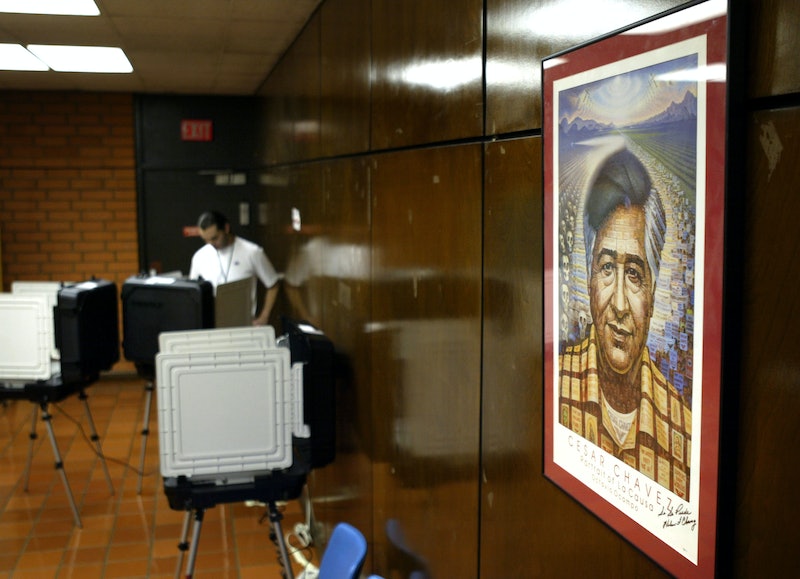 On Friday, Diego Luna’s new biopic Cesar Chavez premieres. Chavez was a civil rights and labor activist who spent the better part of forty years fighting for the rights of migrant farmworkers in California. The advances he made for labor are well-known and unquestionable: As leader of the United Farm Workers (UFW), Chavez helped secure the first ever collective bargaining agreement for migrant farmers, the first union contracts requiring parental leave, the first union contracts banning sexual harassment, the first union medical care for farmers, and a host of other historic gains for workers.

But that’s only half of his legacy. There’s a whole lot about Cesar Chavez you probably don’t know.

He Came Up With “Si Se Puede!”

During a 24-day fast in 1972, Chavez and his wife, Delores Huerta, came up with the rallying cry “Si Se Pued e ,” which roughly translates to “Yes, It Can Be Done.” This soon became the official slogan of the UFW, and was frequently heard in crowds at his rallies. The phrase was later appropriated by everyone from immigration activists to a Mexican airline (which had to drop it after the UFW sued for trademark infringement). It is still used in protests today.

During his 2004 Senate run, Barack Obama led his supporters in a chant of “Yes, We Can!,” and the phrase later became a centerpiece of his presidential campaign. Obama later honored Chavez by declaring March 31st, 2013 Cesar Chavez Day and dedicating a monument in his honor.

He Fasted For A Month When He Was 61

Chavez was committed to non-violent resistance, and frequently used hunger strikes to draw attention to the injustices faced by migrant farmworkers. But it’s easy to forget just how much brutality he subjected himself to during these strikes. In addition to two successful fasts earlier in his career, Chavez went without food for an astonishing 36 days when he was 61, in order to protest the use of pesticides in grape production. As a result, he lost 33 pounds, suffered from fevers and vomiting, and became so weak that he could hardly talk. He stopped fasting only after doctors warned that he was at serious risk of dying within 24 hours.

He Never Made It To High School

Dropping out of school generally has a bad rap, but Chavez did so for a nobler reason than most. In addition to the persistent racism levied at him by his peers and teachers, who would smack him with rulers when he spoke Spanish in the classroom, his father had been in a car accident that year and was put out of commission. Chavez didn’t want his mother to have to work in the fields to make ends meet, so he dropped out of school and worked in the fields himself.

Nevertheless, he placed a high value on education and became a voracious autodidact later in life. It must have been extremely satisfying when, in 1992, he received an honorary doctorate from Arizona State University.

Chavez tends to be lionized by the left, but as with almost any political leader, he’s got some marks on his record. During 1977, ostensibly in an attempt to show solidarity with the Filipinos in the UFW’s ranks, Chavez accepted an invitation by the president of the Philippines to visit the island nation. The problem is that the president of the Philippines was Ferdinand Marcos, a dictator known for political repression, widespread human rights violations, and jailing union leaders in his country. Chavez subsequently praised Marcos and his regime, thus enraging many of his supporters.

His stance on immigration was also controversial. Early in his career, Chavez opposed illegal immigration under the theory that employers would use undocumented immigrants to break labor strikes and undermine the union’s efficacy. In 1973, UFW workers assembled along the U.S.-Mexican border and attempted to convince immigrants not to enter; some did so anyway, and were subsequently assaulted by UFW members, which acted under the guidance of Chavez’s cousin, Manuel.

Eventually, the UFW advocated for amnesty for undocumented workers, and helped craft a bill after Chavez’s death that gave legal status to roughly three million immigrants.

None of this diminishes the very real gains Chavez made for migrant workers in his life, but it is a reminder that his legacy is far from flawless.

He Was An Animal Rights Activist, Too

Chavez is known for his labor activism, but he also devoted a significant amount of effort into advocating for animal rights.

“I became a vegetarian after realizing that animals feel afraid, cold, hungry and unhappy like we do,” Chavez said. “I feel very deeply about vegetarianism and the animal kingdom. It was my dog Boycott who led me to question the right of humans to eat other sentient beings.”

For the last 25 years of his life, Chavez was a vegetarian. He was also vegan for at least some of that time, although historical records differ as to how long. He personally encouraged those close to him to follow in his shoes, and was awarded a Lifetime Achievement Award by In Defense of Animals. When he died, he was buried next to his dog.

“The basis for peace is respecting all creatures,” he said. “We cannot hope to have peace until we respect everyone–respect ourselves and respect animals and all living things.”