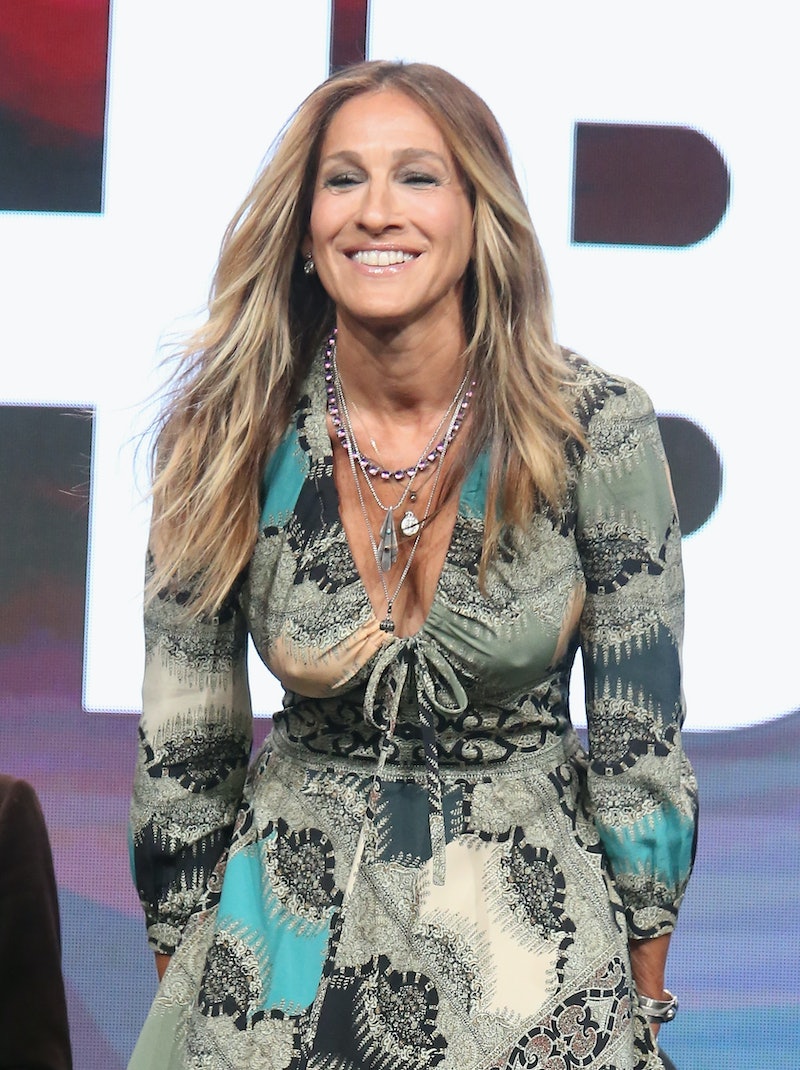 If you've ever wondered what Carrie Bradshaw thinks of Kim Kardashian, wonder no more. Sarah Jessica Parker loves Kim Kardashian and isn't afraid to let the world know how wonderful she thinks the reality star is. While chatting with the Daily Mail Wednesday at the launch of the actor's new perfume, Stash, the former Sex and the City star didn't hold back in her praises of Kardashian. After being asked about what it was like to meet Kardashian with her son, James Wilkie, backstage at one of Kanye West's shows over the summer, SJP gushed, "She was lovely. My son is a huge Kanye fan and they were really gracious and allowed him time with Kanye and that was in large part Kim’s doing." She even said she was "incredibly impressed" with the Keeping Up With the Kardashians star's "graciousness" and her "presence." Parker continued,

"There was a focus that I witnessed, not just with my son — whom she gave a lot of time to — but with everyone in the room. She was never looking over her shoulder, she was hospitable and lovely. It was so cool to watch her with my phone — she took my phone and was like, 'let me shoot this whole thing,' and she shot the whole conversation with Kanye and my son, which was so sweet."

Kardashian has yet to comment on Parker's lovely comments, but I'm sure once she hears how the woman who will forever be idolized as Carrie Bradshaw feels about her, she will freak out appropriately. I mean, who wouldn't? Plus, Kardashian loves Parker just as much as Parker loves Kardashian. In September, the 35-year-old mogul took to Snapchat and shared a snap with herself and the 51-year-old actor. In the snap, Kardashian acted like a true SJP fan and said, "You’re, like, my idol. You’re the most amazing person on the planet." So, yeah, she is most likely going to be overwhelmed (in a good way) when learning of Parker's praises.

The Divorce star didn't stop there with her compliments, either. After being asked if she thinks Kardashian is a "modern-day style icon," Parker said, "I don't know what icon means anymore. I don't think of myself as a style icon." She continued, "I think Kim obviously has enormous influence and she is more and more aware of what she wants and the images that she chooses to project, which she is in complete control of."

"I think she is a young woman who is evolving all the time and one shouldn't make a decision about anybody. She is not baked and done — I'm not either — so let her experiment and delight in the choices she has to make and let's be kind to one another and be good to one another."

Basically, both Kardashian and Parker look up to one another and are newfound BFFs. Now we just have to see if she appears on KUWTK.