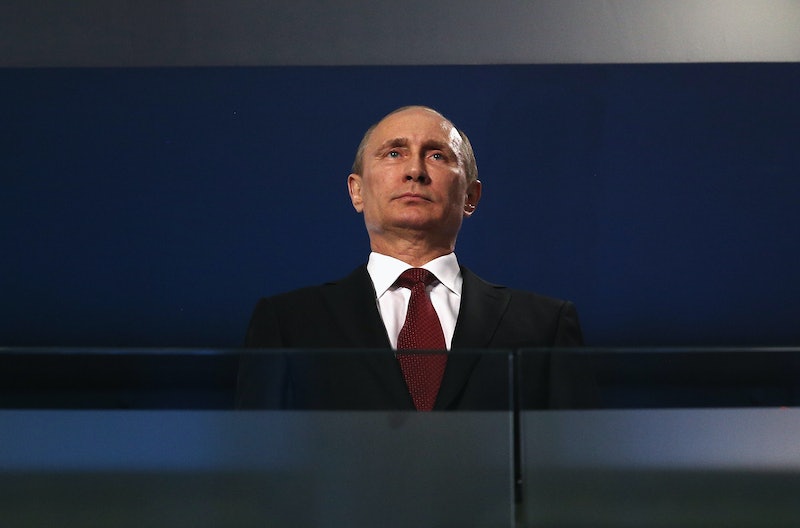 According to President Vladimir Putin, Crimea is part of the Russian Federation — it's done and dusted. In a speech to the Federal Assembly Tuesday, Putin stressed that Crimea's referendum Sunday, which saw the country vote to join the Federation, was within the bounds of international law. The annexation of Crimea by Russia was a natural response to the West's intention to draw Ukraine into its sphere of influence, Putin added, and the West is ignoring Crimea's "free will" by opposing it.

Putin's speech came hours after the president signed a decree recognizing Crimea as an independent state. Following the televised address, he signed another document with Crimea's prime minister and parliament speaker to incorporate the peninsula with Russia. While this agreement still needs ratification and approval from Russia's Constitutional Court, the Associated Press reports those steps are just considered formalities. Basically, Russia's going to do what they want, and doesn't particularly care what the West or Ukraine have to say about it.

Putin made this clear as day Tuesday when noted that Crimea has "always been an inalienable part of Russia," and called the breakup of the former Soviet Union a "historical injustice," according to USA Today. Sure seems like someone is holding a grudge...

"We need to be as strong as ever in future, to rise up to challenges. We will be facing some opposition from the West," Putin said.

The President also denied Western accusations that Russian troops had invaded the peninsula before the public vote, and justified military presence by referencing a treaty with Ukraine that allows Russia up to 25,000 troops at its Crimean base.

A little history: Crimea had been part of Russia since the 18th century, until Soviet leader Nikita Khrushchev transferred it to Ukraine in 1954. Reclaiming the Black Sea peninsula would be a huge victory not only to soothe bruised egos, but for strategic naval purposes as well.

Still, Putin said, "we don't want division of Ukraine," according to a translation by the Associated Press; Russia doesn't want to move into other parts of Ukraine, he added.

Meanwhile, Ukraine remains strong in its resolve to keep Crimea. An overwhelming majority of Crimean citizens voted Sunday to secede, but Ukrainian officials insist the region belongs to them and they are prepare to defend the territory.

International tensions are at all-time high, with France's Foreign Minister saying the Group of Eight has suspended Russia's participation in their meetings and the United States imposing more sanctions of Russians and Ukrainians. The pressure overseas has prompted some finger-pointing back in America, with Mitt Romney (of Ryan and Romney 2012) blaming President Barack Obama and former Secretary of State Hillary Clinton for their "failure to act" in Ukraine.