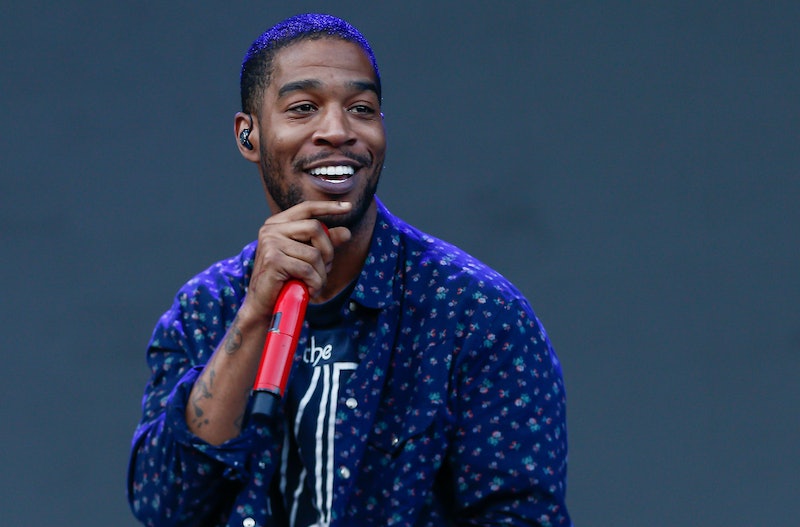 These days, a social media rant is enough to make huge waves in pop culture. How can we ever forget Taylor Swift vs. Nicki Minaj, Amber Rose vs. Kanye West, and Drake vs. Meek Mill? Twitter has become an artist's platform to really get things off their chest, and well, Kid Cudi had some words to say about Kanye West, Drake and the hip hop industry as a whole, and they weren't exactly nice ones. Cudi tweeted about "the fake ones," calling out West and Drake specifically, and wrote 17 tweets to really go in. Now, exactly why is Kid Cudi in a beef with West and Drake? They've been supporting each other for many years, so if you think this seems like it came out of nowhere, you're not alone.

The reason this beef might be really shocking for fans is because Kid Cudi and West have a very long history together, as both collaborators and good friends. As recently as February, the two were seen hugging it out and dancing to West's song "Father Stretch My Hands Pt. 1" during his Yeezy Season 3 fashion show at Madison Square Garden. Another important thing to note is that Cudi had writing credits on West's The Life of Pablo, so whatever caused this rift between them is very recent.

Bustle has reached out to reps for Cudi and West regarding the feud, but has not yet heard back.

And this was not the first time that Cudi and West worked together closely. In 2008, West signed Cudi to his label, G.O.O.D Music, and they subsequently embarked on writing music together. In late 2008, West released his groundbreaking electro-hip-hop album, 808s & Heartbreak, which included tracks co-written by Cudi himself. In fact, over the years, many fans have argued that Cudi helped shape West's alternative sound, which spawned an era of emotional, experimental hip-hop, later adopted by Drake, The Weeknd, and more.

In an interview with Complex in 2009, Cudi said that he aimed to be not only "as big as Kanye" but eventually bigger, as a way to push him as an artist. In a Q&A session in 2010, West called Cudi his favorite artist, and said, "If I could make music like someone, I'd like to make music like him. I like that emotion, really heartfelt."

OK, so all seems right in their world so far, so where did the drama begin? In 2014, Cudi claimed in an interview with Complex that his vocals on West's "Guilt Trip" were not approved by him, nor did he even know about the song, but apparently, he got over that because they worked together again on The Life of Pablo. Bustle reached out to West's rep regarding Cudi's claim, but has not yet heard back.

After Cudi's Twitter rant, where he called out 'Ye and Drake by name, West and Drake both had some words in defense during their recent concerts. Being one of Cudi's first supporters and mentors, it makes sense that West would be hurt and when he gets ranting, he gets very real.

West specifically noted, "Kid Cudi, we’re two black men in a racist world. I wore skinny jeans first. I got called names before you, bro." He also told the crowd, "Don't ever mention 'Ye name. Don't try to say who I can do songs with... You mad 'cause I'm doing songs with Drake. Ain't nobody telling 'Ye who to do songs with. Respect the God!"

In early September, West announced that he was working on music with Drake, and Cudi's tweeted could be referencing that fact. For instance he wrote, "My tweets apply to who they apply. Ye, Drake, whoever. These n*ggas dont give a f*ck about me. And they aint f*ckin with me."

Cudi could very well be questioning West's loyalty or simply expressing his frustrations over being an artist who has been overlooked. In the past, Cudi has opened up about his struggles with "lack of honor" in the industry. He told Complex in 2014,

"I used to think I had to speak my mind and defend myself all the time and I’m just off that... It’s just because of my lack of running around and being in the media and keeping to myself, it goes unnoticed is all. People know, or at least I think people know. I don’t need to go down the list and name all the songs I’ve co-written. I don’t need to say these things. It’s understood."

While the exact reason for Cudi's rant is not known yet, West and Cudi's friendship has been well-documented and their fans seem to be caught in the middle, expressing how difficult it is to even attempt to choose a side:

Kid Cudi has been in the industry long enough to make his own opinions, but I have a feeling that he will soon make up with the artist he once called his "big brother forever." Everyone has the right to criticize and let some things off their chest, especially against family.