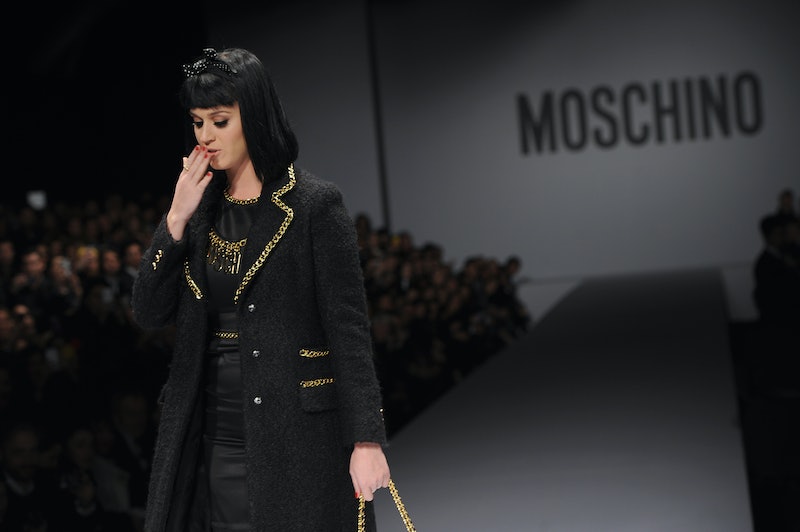 Is there anyone so capable of eliciting long, exasperated sighs from us like the doe-eyed Katy Perry? In an interview with an Australian "breakfast" show (I guess their version of Kathy Lee and Hoda—jury's out on if they drink as much), the (pretty sleazy) host asked Katy Perry if she's a feminist. "A feminist?" she responded. "Uh, yeah, actually, I used to not really understand what that word meant, and now that I do, it means that I love myself as a woman and that I also love men. So, sure! I am a strong woman! So hear me roar!" Nice plug there, KP.

Not that there is anything wrong with Perry's personal definition of feminism per se, but it's pretty basic and heteronormative. If that's her definition, though, that's fine, but the host later shows Perry a video of a young girl singing along to the music video for "Roar" on her television, and asks her what advice she has for young girls, to which she says OH so ironically: "Knowledge is power, so stay focussed in school, because a great education will come in handy."

Oh good god girl, take your own advice. Perry purports that she didn't know what feminism was; her latest music video for "Dark Horse" had her burning a pendant with the word "Allah" on it; she recently had a super-racist, kimono filled "asian-fusion" geisha performance, and later claimed that she thought geishas were the "masters of unconditional love."

Katy Perry's ignorance slides time and time again, in part, surely, because she has created an image of the naive, wide-eyed pop star that just wants to wear shiny, candy-hued outfits and have fun out there! But in this same interview, the Australian host tells her that some people think she's all froth and bubble, and in the one moment of clarity, Perry retorts, "Honey, if I were all froth and bubble, I would have been gone a long time ago."

So it's at least somewhat apparent that her "I didn't know any better" facade is an act, but it's becoming inexcusable. We can't fault KP entirely; when celebs act up, the first question is always "Isn't there anyone in her publicity team that might have known better?" But therein is the problem of Perry: she is capitalizing on her persona of naiveté to continue to appropriate cultures and "kiss girls cause she likes it." It wouldn't be as dangerous if she weren't also speaking as a role model to younger girls. Some stars, like Rihanna, have come outright and said that "role model is not a title I have campaigned for," which doesn't excuse their behavior, but it does absolve them of some responsibility.

Am I mad that Perry didn't know what feminism was? Not as mad that her songs have been called feminist anthems, like "Roar," when it's a world she doesn't really understand. Or maybe she does, and she's just pretending not to, but the whole "I'm innocent, I didn't know any better" act is tired.