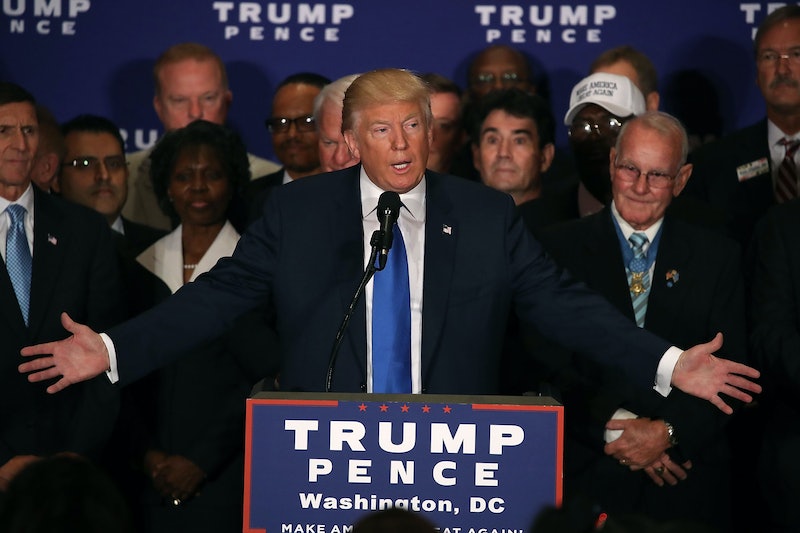 There is no evidence that Barack Obama was born anywhere other than the United States, and on Friday, Donald Trump finally acknowledged this. After spending the better part of five years publicly questioning Obama's place of birth, Trump gave a speech at one of his hotels and flatly stated that "President Obama was born in the United States, period." Trump has dropped the birther conspiracy in all but the most subtle of ways. Now, he needs to be held accountable for it, and I mean this in more ways than one.

On the one hand, Trump must be held accountable in a moral sense. We can't let today's statements distract from the fact that he's cast doubt on Obama's birthplace during every calendar year of the last half-decade. It began in 2011, when he openly doubted Obama's birthplace in an appearance on The View.

"Why doesn't he show his birth certificate?" Trump said at the time. "I'm starting to think that he was not born here."

Shortly thereafter, the real estate tycoon told Fox News that he'd sent a team of investigators to Hawaii to get to the bottom of this non-issue. Trump said that these investigators "cannot believe what they're finding." He never elaborated on what exactly it was that his team had supposedly found.

Obama released his long-form birth certificate in April of that year. But that didn't stop Trump, who continued to question the president's birthplace and constitutional eligibility in 2012.

"A lot of people do not think that it was an authentic certificate," Trump told Wolf Blitzer in May of 2012. "His mother was not in the hospital. There are many other things that came out."

Trump didn't let up on the birtherism after Obama won reelection. He sent the following tweet in 2013:

When asked about Obama's birth certificate in 2014, Trump told Irish television that "a lot of people feel it wasn't a proper certificate." In 2015, he told Fox News that "I'm not exactly sure what [Obama] gave but he gave something called a birth certificate," and then added that "I don't know if it was or not." And when CNN asked him if Obama was a U.S. citizen in January, Trump replied, "Who knows?" And just one month before the Iowa caucuses, he added: "I have my own theory on Obama. Someday I'll write a book."

The record is clear: Trump has been fanning the flames of birtherism for the last five years. This matters because the birther movement is, and always has been, a racist effort to delegitimize the first black president by depicting him as an "other" — a foreign infiltrator, not a real American. Trump has repeatedly injected new life into this conspiracy theory despite hard evidence to the contrary, and he continued to do so during his successful campaign for the Republican presidential nomination.

This is morally repugnant and insulting to a great number of Americans, and Trump has never apologized for it. For both of those reasons, he must repeatedly be held accountable — in the debates, in interviews, and of course, by Hillary Clinton and her supporters.

But there's another sense in which Trump has to pay for his birtherism, and that's the literal sense.

Trump said in 2012 that he would donate $5 million to charity if Obama produced documents proving that he was born in America. The Washington Post reached out to Trump asking if he would fulfill this promise, but the campaign hasn't provided evidence that any such donation has been made.

Last, but certainly not least, Trump falsely claimed on Friday that it was Clinton who started the birther conspiracy during her 2008 primary campaign. This is flatly untrue. There is absolutely no record of Clinton or her campaign ever questioning Obama's birthplace, either in public or in private. It was a lie, and Trump must be held responsible for this as well.

Trump owns birtherism. He's doubted Obama's citizenship consistently for the last five years, including while he was running a primary campaign for the presidency. This isn't insignificant, because Trump is one of the most visible and high-profile public figures in the country. He's given repeated life to a racist lie about the nation's president, and he hasn't apologized for doing so. This cannot, and must not, be forgotten.