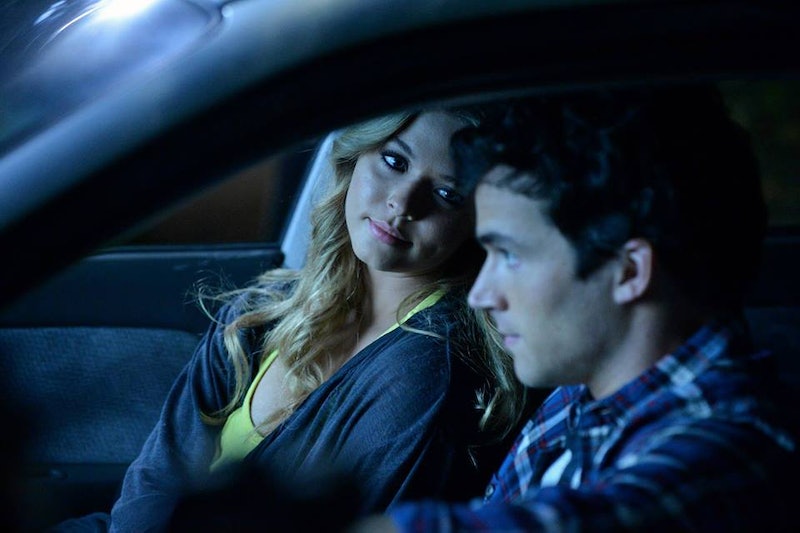 Alison DeLaurentis is alive and plans to tell-all and we've got our Pretty Little Liars Season 5 spoilers — so what else is there to worry about? Well, a lot. And Ali's friends should be worried too — about what's going to happen to their relationships now that Ali's back in Rosewood. A few episodes ago, Ezra broke Aria's heart when he revealed that he was using her to gather info for his mystery novel about Ali's disappearance. It really sucked on his part, but all roads lead to Alison DeLaurentis — if she could break up those two, who Marlene King called "soulmates," who's next?

We now know, from Internet spoilers and the cast's recent Paleyfest panel, that Alison will be back in Rosewood for Season 5. And by "back," we mean really back — as in she's going to normal things and try to live in the actual world with her friends. Which is great, considering that she's alive and well and that means that she has nothing to be afraid of anymore. What's not so great, is that she'll probably destroy all of the Liars' relationships in record time just by existing. It's the hard truth, sister.

King revealed during the show's panel that Alison's return is going to affect all of the girls both individually and as a group as well as all of their love interests. Which could mean a lot of things, but we know for sure that Emily's going to question her feelings for Paige and that Toby and Caleb are going to be pissed if Ali gets welcomed back with open arms. Everyone's been suffering because of her for four seasons — including them — so there's no chance that this is going to go over well.

Ali's somehow involved in all of their relationships — either before her "death" or during her time on the run. So if she's coming back, we're willing to bet no one's relationships or former relationships are safe. But, here are the odds anyway:

There are some crazy fan theories swirling around the big "Ezaria" reveal during Season 4's spring finale. And the biggest and most popular — Aria's pregnant. If that's the case, considering how Ezra threw himself into parenting Malcolm when Maggie turned up and told him he was her baby daddy, there's a strong chance that these two will get back together. King said herself that they're each other's soul mates — but can a baby repair the damage Ali's inadvertently done?

Ezra admitted to only keeping their relationship going to investigate Ali's disappearance. He and Ali shared some sort of relationship (that we're promised to learn the details of during the finale) and if he spent so much time and energy trying to find out what happened to her — they were definitely more than writing partners. And if we take Aria's breakdown into consideration, she might not be so interested in co-parenting with her former love either.

Verdict: The damage is done.

Again, it's not secret at this point that Emily and Alison had some type of relationship before her disappearance. She also broke Emily's heart a fair share of times — which might explain her misguided "relationship" with Noel Kahn. So, yeah, Emily's damaged from her time spent with Alison at the town's Kissing Rock. She loved Ali and Ali claims that she loved her back and that she never meant to hurt her — so it's reasonable to believe that now that she's back in Rosewood, they could rekindle their relationship and leave Paige out in the cold.

Here's the thing with Paige, she's not exactly helping herself in this situation. She obviously feels threatened by Ali — which led her to betray Emily's trust and write that letter to the police that Ali is, in fact, alive. So there's already a strike against her, which is not really Ali's fault, but it kind of is. Ali's always been between them and now that Paige acted out on her insecurities, it doesn't seem likely that Emily will forgive her for putting Ali in danger and for betraying her.

Now this situation is interesting. In case you forgot, Toby once worked with A — whether he claimed it was to protect Spencer or not, he still did it. And most recently, Spencer's obsession with A and Ali led her to her prescription drug bender that sent Toby running. Not to mention that Ali once tormented Toby and she obviously never really liked Spencer that might. Her name is all over and intertwined with this relationship and that's definitely not a good thing.

Spencer and Toby have come really far — albeit her recent drug problem — as a couple. They've broken up, Toby's disappeared, Spencer's gone to a mental institution and rehab, and somehow they always manage to get back together. And that's a great sign for them, since they're both so equally messed up that there might not be anything worse that Alison could do to them. They're also both rational and we can see them taking caution with Ali's return and not being so quick to welcome her back into the fold with open arms. The only place they could run into trouble would be if Alison could still manipulate either one of them — which we doubt — but anything's possible.

Hanna's not technically in a relationship right now — but we're including her anyway because there are a lot of ways this can go for her. Each one of her eligible suitors have had a brush with Ali or A — Holbrook is investigating her "murder," Caleb's helped her crack codes and stalk A before, and Travis had a brush with A at his family's garage. Regardless of who she chooses, A's mark is on — and by extension, Alison's mark — is on the relationship.

Like with Spencer and Toby, Hanna and all of these guys seem to operate rather rationally. None of them are going to support her rekindling a friendship with Ali (honestly, who would, she repeatedly fat-shamed her and that's uncool) and we're honestly not so sure if Hanna's going to run back to Ali either. She's grown significantly as a character and she seems more likely to be cautious around her recently revived friend than ready to jump into being BFFs again. There may not end up being any problems for Hanna at all, which would be nice considering the luck she's had.

More like this
Every Horror Movie Reference In The 'PLL: Original Sin' Premiere
By Alyssa Lapid
The 'PLL: Original Sin' Creators Say A’s Identity Will Be “Very Clear” By The Season Finale
By Alyssa Lapid
Nicola Walker Is Confident About Emma & Ian’s Future
By Frances Stewart
Nicola Walker’s IRL Husband Is No Stranger To TV Screens
By Darshita Goyal
Get Even More From Bustle — Sign Up For The Newsletter