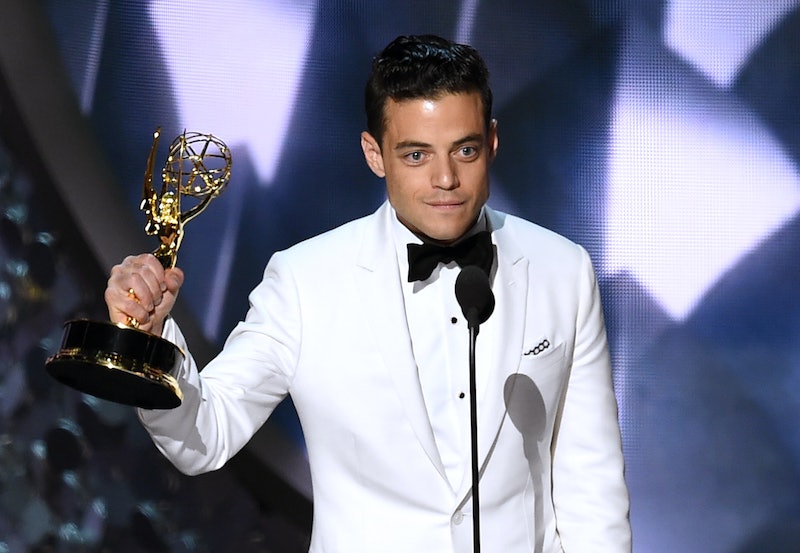 Oh, what a night. With a list of nominations featuring a group of majorly talented actors including Bloodline's Kyle Chandler, Better Call Saul's Bob Odenkirk, The Americans' Matthew Rhys, Ray Donovan's Liev Schreiber, Mr. Robot's Rami Malek, and House of Cards' Kevin Spacey, it was really anyone's race in the battle of winner of Lead Actor in a Drama Series at the 2016 Emmys. After the year of television that each nominee had, I wouldn't have been surprised if any of them had been the winner — each one deserved it, especially for their work in 2015 and 2016. However, there was one nominee who stood out amongst the rest — and when his named was called during the ceremony, it was absolutely perfect. Rami Malek won the 2016 Emmy for Lead Actor in a Drama Series thanks to his work in Mr. Robot.

Malek looked overwhelmed and shocked as he made his way to the stage to accept his award. "Please tell me you're seeing this too," he nervously stated as he stepped in front of the microphone, an adorable throwback to Mr. Robot (his character, Elliot, often asks the viewers if they're seeing what he's seeing). His speech that followed was sweet and, honestly, deeply moving: After Malek thanked those associated with Mr. Robot, he moved on to dedicate the rest of his speech to "the Elliots" of the world — those people who likely wouldn't be inclined to hang out with a man like Elliot, who feels alienated from the world, despite liking the show. "Congrats to all the Elliots out there," he stated, as he cheered the audience with his award.

Malek couldn't have deserved this award more, and honestly, I can't think of a more fitting way for him to honor the series and its fans.

More like this
How Lady Gaga & Adele Are Closer To The EGOT All Of A Sudden
By Jake Viswanath
What’s New On Netflix: 'Never Have I Ever' & 'Indian Matchmaking' Return
By Arya Roshanian
Everything To Know About The HBO Max & Discovery+ Streaming Service Merger
By Brad Witter
What’s New On Netflix: 'Bridget Jones’s Diary' & 'Monster-in-Law'
By Arya Roshanian
Get Even More From Bustle — Sign Up For The Newsletter