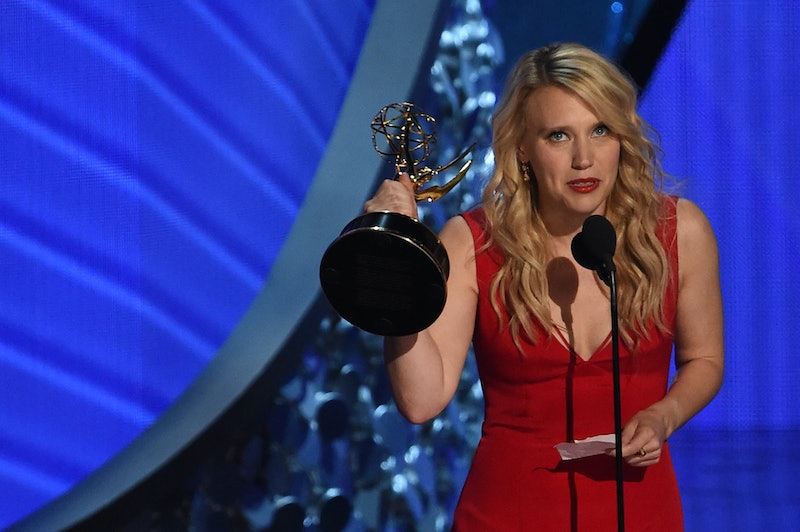 It's been a big night for TV's best and brightest stars, and that includes the talented group of women who were all nominated to win Supporting Actress in a Comedy at the 2016 Emmys. The group consisted of Getting On's Niecy Nash, Mom's Allison Janney, Saturday Night Live's Kate McKinnon, and Transparent's Gaby Hoffmann and Judith Light. Each had just as amazing a year on television as the next, so it wasn't a surprise when Kate McKinnon nabbed the award — with the year she's had on Saturday Night Live, she deserved it.

As her name was announced by presenters Kristen Bell and Joel McHale, McKinnon began to shed tears. She walked to the stage wiping them away, and then gave an emotional speech thanking Lorne Michaels, the creator of Saturday Night Live, as well as her family. In a particularly moving moment, she thanked her father for making her watch Saturday Night Live when she was 12 — without his guidance, she wouldn't have been standing on stage accepting her first Emmy Award.

McKinnon has had a huge year, of course. Besides her work on Saturday Night Live, she also appeared in the summer blockbuster Ghostbusters, and, unsurprisingly, totally stole the show. Here's hoping that with this Emmy win, McKinnon will be in even more major projects in the very near future. After all, the world could always use more Kate.