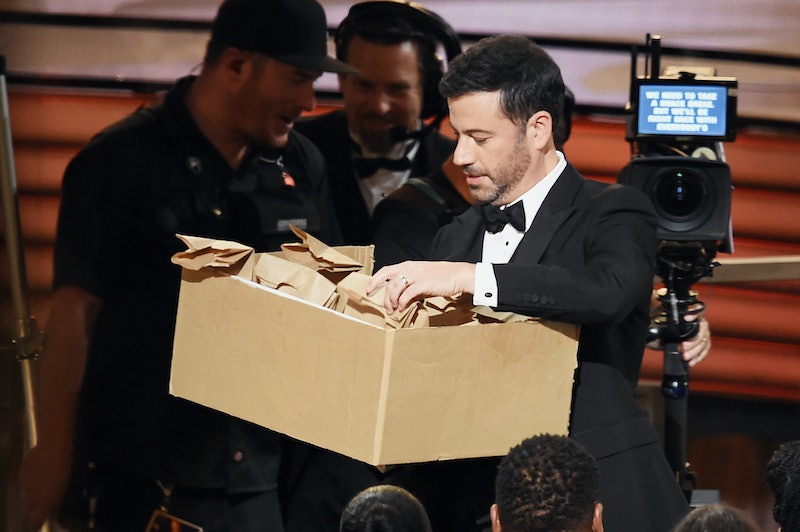 On Sunday night, 2016 Emmy host Jimmy Kimmel told his jokes and introduced TV's biggest names — all the usual tasks award show hosts are given. But then his Emmy stint veered into all-too-familiar territory these days: He introduced his mom, who was making peanut butter and jelly sandwiches for the Emmy audience in the Microsoft Theater, and he had the kids from Stranger Things hand them out. Yup, it was another award show food handout combined with jokes about how Hollywood stars don't eat. The Emmys' peanut butter and jelly sandwich handout just proved that this bit is no longer funny and needs to stop.

Kimmel began by joking, "I know these award shows are long and you haven't eaten since Labor Day." You read that right — another joke about how Hollywood folks don't eat and starve themselves in order to fit into their glamorous dresses and tuxes. While there may be truth to the joke, it's a bit played out by now, isn't it? We certainly don't need to glamorize or normalize disordered eating — we need to change the social norms that make actors feel the need to go to unhealthy lengths to remain ultra thin.

Events like the Emmys put the preternaturally toned and trim bodies of Hollywood on display as the physical ideal.

Here is a parade of people being celebrated, yes, for their talent, but also for conforming to a societal ideal of thinness. It is already problematic that Hollywood only sees one type of body as worth celebrating, when in fact all bodies are beautiful and deserve love. It is even more problematic that all these "I haven't eaten in weeks, LOL!" jokes are condoning achieving this body type through disordered eating. And it's triply troubling for disordered eating to be shrugged off or laughed at, as though eating disorders are the butt of a casual joke rather than a real problem that needs attention and treatment.

Women, and especially young women, compare their bodies to the ones they see on screen and in print. The amount of time teens spend watching TV and movies is associated with their dissatisfaction with their bodies, and a 2010 study says that 48 percent of girls wish they were as thin as the models they see in magazines. The obsession that Hollywood and the media have with thinness becomes a national obsession, and people are willing to go to unhealthy lengths to adhere to these unrealistic and unnecessary ideals. To achieve these body types they've been taught to desire, 31 percent of girls say they are willing to starve themselves in the pursuit of weight loss. 30 million people in the U.S. suffer from an eating disorder.

And these disorders are nothing to laugh off. They are not the butt of a joke. They are painful and haunting and sometimes fatal. According to National Association of Anorexia Nervosa and Associated Disorders, eating disorders have the highest mortality rate of any mental illness.

This joke is unoriginal and insensitive, and it's reminiscent of several other "food at awards ceremonies" jokes that have occurred over the past two years. In 2014, Oscars host Ellen DeGeneres ordered a giant pizza delivery to the Academy Awards, and Chris Rock did the same at this year's Oscars, when he had his daughter's Girl Scout troop sell cookies to the audience. There's a clear pattern of hosts "feeding" Hollywood at award ceremonies.

Come on, Kimmel and future award show hosts. I know you have it in you to do something even better — and something that doesn't tacitly shrug at something as unfunny as disordered eating. Hollywood needs to change the pervasive idea that thinner is better, and hosts need to stop treating disordered eating like it's a laughing matter.