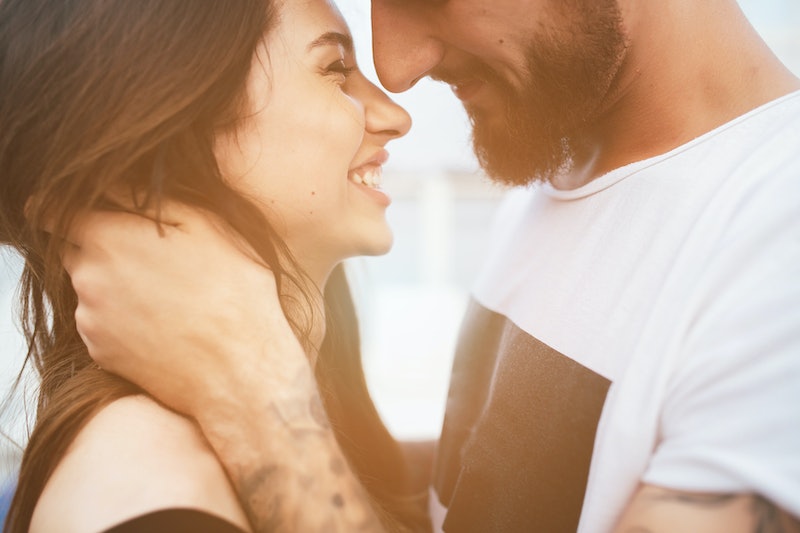 Attraction is an interesting thing. How many times have you disagreed with your friends over what you find sexy? We all know that attraction is different for everyone. But for whatever those reasons are, they all have to do with the science of attraction. “We must always understand that there are two levels of attraction—biological and psychological,” Human Behavior Expert & Relationship Expert, Patrick Wanis, Ph.D. tells Bustle.

According to Wanis, the former is based on “hardwired design for reproduction” such as having healthy offspring. Meanwhile, the latter is based on “temperament, attachment styles and subconscious drives” like self-image, beliefs about relationships, and so on. So there’s tons of factors involved in determining why you’re attracted to anyone. But what makes your significant other so special?

“When we are attracted to someone your body produces norepinephrine. The stronger the attraction, the more that's produced. That's what gives you that unmistakable feeling of attraction: sweaty palms, racing heart, and dilated pupils,” Dawn Maslar, M.S., author of the upcoming book Men Chase, Women Choose: The Neuroscience of Meeting, Dating, Losing Your Mind, and Finding True Love, tells Bustle. “It's part of your fight or flight response.”

1. Attraction Usually Begins With The Eyes

You hear a lot about how men are “visual creatures” above anything else. It’s just how they’re wired, Maslar says. Men, unlike women, tend to place more importance on visual stimulation because they have 25 percent more neurons in their visual cortex.

2. Once The Eyes Say “Yes,” Our Noses Come Into Play

“It’s not really smell, but rather a sensing of different molecules,” Maslar says. According to her, women pick up on Major Histocompatibility Complex (MHC) molecules, which come from your immune system. When hetero women are attracted, they’re mostly going to be attracted to men of opposite immune systems.

3. A Search For Hormones Also Play A Huge Role

Women seeking men look for higher levels of testosterone in men. That’s usually the basis for why women find men with certain characteristics like beards or deeper voices more attractive. Hetero men, on the other hand, pick up on pheromones like copulins, which are produced during ovulation.

4. Your Environment Can Also Have An Effect On Attraction

Fall is here, so it’s best to take advantage of the cooler weather because according to Maslar, your environment can definitely play a role in attraction. “Holding a cup of warm coffee will make people other person seem warmer and more generous,” Maslar says. “Holding something cold will make the other person seem colder.”

The last decider of attraction is the first kiss. As Maslar says, “It’s more than a taste test. There is a host of chemicals and sensations that come into play.”

A study conducted by psychologists at The State University of New York at Albany found that 59 percent of men and 66 percent go women have ended a relationship after a bad first kiss. So, when it comes to attraction, the kiss is essential.

The part of the brain that gets activated during that kiss is the insula, whose job is to assign emotional significance, Maslar says. The insula is involved in sensations such as taste and touch, as well as emotions like trust, empathy and love. The insula is also involved with negative judgments such as disgust. Because of that, if the insula is not happy during the first kiss you can walk away with a literal bad taste in your mouth.

So what makes the insula happy? “Kissing is complex but you can do a few things that may help. Of course, go light on the garlic and other strong flavors. And, always have a breath mint. But one trick that might help more than a mint is bubble gum,” Maslar says. “A joint study with Singapore and the Netherlands found that love makes things taste sweeter. In other words, sweetness is associated with love. That's probably why the tradition of bringing candy on a first date. Therefore, if the first kiss is both pleasant and sweet, there is a pretty good chance your date will want to kiss you again.”