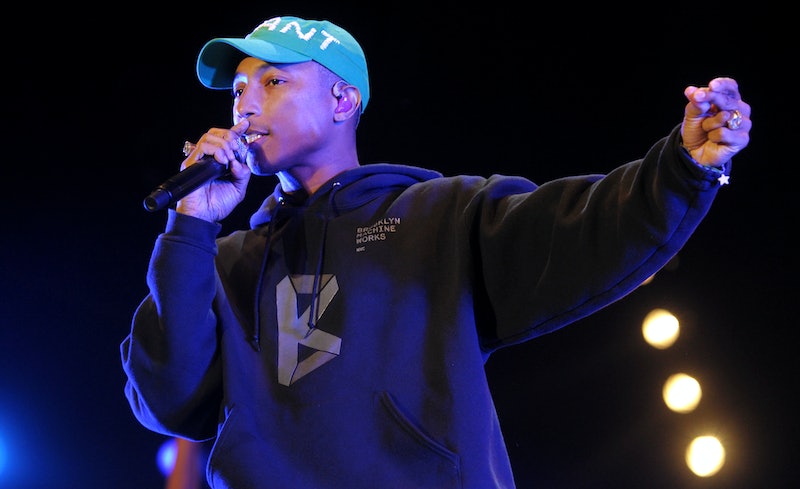 Last month, NBC gave a post-Olympic preview of The Voice Season 11 — and the show looked very different. The singers were still amazing, the coach banter was still super fun, and the red chairs still turned around during the Blind Auditions. It was the two of the faces in the chairs, however, that were totally different, with Miley Cyrus and Alicia Keys joining the show as coaches. So wait, why isn't Pharrell Williams on The Voice Season 11? Bustle has reached out to NBC and Williams' reps for comment, but hasn't heard back at this time.

It does seem like the "Happy" singer has been keeping busy beyond the singing competition show. Earlier this year, NBC shocked The Voice fans with news of the coaching change-up, as reported by The Wrap and other sources. Longtime coaches Blake Shelton and Adam Levine remained on the roster, but the network announced that Christina Aguilera and Williams would be replaced by Cyrus and Keys for Season 11. Williams had joined the show during its seventh season in 2014 and his thoughtful, yet competitive and compassionate demeanor was a welcome addition to The Voice. Pharrell has not seemed to publicly comment on the exit, but I know myself and other fans will definitely miss him as a coach. During his tenure, Williams guided Sawyer Fredericks to a victory in Season 8.

Here's what Pharrell has been up to since leaving The Voice, according to social media.

For what's poised to be one of 2017's most notable films, Williams has been working on music for the Taraji P. Henson-starring movie Hidden Figures, according to Deadline. It's about a team of African American women mathematicians who advised NASA in the 1960s. Pharrell is also one of the film's producers, and told Deadline why he wanted to be involved, saying, “Here are the variables: three African American women, math, science, NASA. How do I not do everything in my body to be a part of this project?”

Next, Williams is planning on conquering the foodie world. According to People, the mega music producer is launching a food line with the venerable brand Dean & Deluca called The Williams Family Kitchen. “Our father-son agreement was that he would make food with healthier ingredients that were a better choice for his lifestyle and would essentially help add years to his life," Williams told People. The publication described the product line as inspired by Williams' father's cooking and family recipes. The products are expected to be in stores by 2017.

What a meeting of minds right here. Could they be working on a project together? Even if not, it looks like Pharrell is also a big fan of the legendary director.

His "I Am OTHER" Brand Has A Product Line At Target

If you've walked around the school supplies section at Target lately, you may have noticed some funky notebooks with "I Am OTHER," the name of Williams' creative collective. It's actually a collaboration between "I Am OTHER" x Yoobi, according to the Target website, and the product line also includes binders, backpacks, pens, pencils, folders, and lunch bags.

Pharrell has been posting some Instagram photos with interesting captions about his ponderings or just the above cool piece of art from New York City's Lehmann Maupin Gallery.

Earlier this year, Williams became the co-owner of the jean company, after collaborating with them for the past two years, according to the company website. “G-Star is an independently minded and forward thinking company," Williams said in a statement, according to G-Star. "I believe they will be the definitive jeans brand of the 21st century. I am looking forward to be part of that mission and to co-create G-Star’s future.”

So, it seems like even though Williams is no longer on The Voice, he is keeping super busy.

More like this
What Is Ariana Grande's Net Worth? When It Comes To Money, She Has No “Problem”
By Hugh McIntyre
Chrishell Stause & G Flip Have “No Rules Or Regulations” In Their Relationship
By Brad Witter
Michael Owen Has Shared His Thoughts On Luca & Gemma
By Bustle UK
Joey Essex's Net Worth Is Not What You Expect
By Sam Ramsden
Get Even More From Bustle — Sign Up For The Newsletter