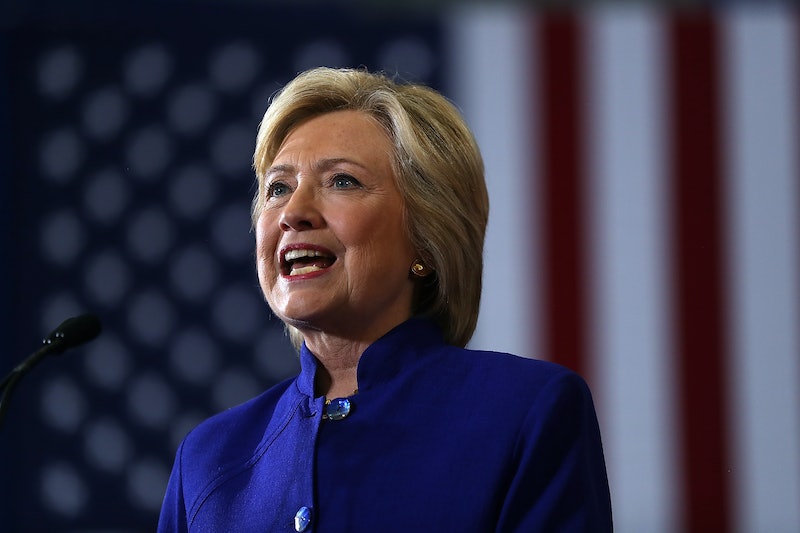 I wouldn't like to be the one to tell Hillary Clinton she's facing a disadvantage at anything. But with the presidential debate season starting on Sept. 26, it's time to ask a few tough questions about the debate process, how we listen to women, and what it's really going to be like for Clinton on the stage, regardless of her opponent. The big question is this: is Clinton, by virtue of her gender, disadvantaged — not because women are less effective speakers or less persuasive than men, but because of gendered assumptions about the nature of power, argument, and how we listen to charismatic people? Evidence suggests that Clinton, even as her best, most charismatic, witty self, may have a handicap: we've never seen a woman in a presidential debate before, and the entire system may be predicated on masculinity.

This is not to say that Clinton won't annihilate Trump; indeed, considering the reportage on her considerable psychological preparations, I'd place good money on her wiping the floor. But perception of outcome, in presidential debates, matters just as much as performance; and some science suggests that, when it comes to the format of the debates (podiums, open speaking, a chance to be aggressive), Clinton may not be heard in precisely the way she wants.

Here's why Clinton may be at an unfair disadvantage when she takes the stage Monday night.

Men Are Seen As "Passionate" Where Women Are Viewed As "Angry"

The instinct of potential presidents in debate contexts is, understandably, to get heated: to make points about injustice, about their opponents' failings, about the ways in which the system needs to be fixed (by their presidency, of course). But a fascinating and upsetting study from Arizona State University in 2015 clarified an important point that may hobble Clinton: it reveals that we have extremely different reactions to women and men when they attempt to angrily persuade us of something.

The study, which used mock jury set-ups, found that when men angrily expressed a dissenting opinion, listeners (both male and female) rated them as influential and were more likely to change their own opinions accordingly. If a woman disagreed vehemently, though, her anger strengthened the opposing ideas of the listeners. The more she yelled, the less influence she had, and the more they were intent on disagreeing with her. When it comes to being persuaded by women, it seems that listening to one woman put forward a point of view with vigor and aggression actually undermines her aim.

This validates science compiled by the American Psychological Association that women's anger is often seen, sadly particularly among women themselves, as "unpleasant and unfeminine." And it raises a difficult issue: are presidential debates inherently biased towards male voices and male victory, purely because of the way we regard argumentative women?

Debates May Inherently Be Rigged To Advantage Men

It's a point raised in a piece for Vox by Ezra Klein, who highlights that Clinton's strengths as a politician are more to do with listening than public speaking, hence her speeches involving so many different viewpoints, and wonders if this reflects a gender divide in the performativity of American politics. "You do not need to assert any grand patriarchal conspiracy to suggest that a process developed by men, dominated by men, and, until relatively late in American life, limited to men might subtly favor traits that are particularly prevalent in men," Klein wrote. This isn't an unfeminist thought; the structures of American power have been constructed by men for men, and that reflects both on the comfort of women within them and how we view women as they break those glass ceilings.

Studies have found that this is actually an across-the-board idea: women don't talk more than men overall, but they're far more likely to be vocal and take charge in collaborating tasks involving listening and exchanging information. (Whether this is societal, innate in the brain, or both is up for debate.) Witnessing Clinton and Trump at diplomatic round tables involving negotiation, for example, would likely give a more complete view of their strengths and weaknesses than just an individual shouting match.

How we react to the candidates matters, and not just visually. Famously, visual and audio reactions to presidential debates have offered different winners; JFK, notoriously, won his debate against Nixon for television viewers, while listeners gave Nixon much more credit. Unfortunately, bias against female voices may provide a bit of an issue for Clinton in general, and not because of any nonsense about her being "shrill."

The phenomenon of "gendered listening," as Fast Company called it in a review of the science, makes a definite difference in our perceptions: societal biases mean that when a male voice is compared with a female voice, the male's speech is given more props and the female's less. Part of this may actually be neurological: male brains, according to a 2005 study, react differently to male and female voices; the male voice is processed in a part of the brain that ties the voice to his own, while the female voice is processed in the same part of the brain that deciphers music. But a strong part of it is just societal gender bias.

It's not all bad news for Clinton, though. Across the board, studies have found that we associate competence and authority with lower-pitched voices, whether in men or in women. Clinton's is relatively lower-pitched, and therefore reads as "powerful." And she knows what she's doing: the sheer amount of attention devoted to Clinton's voice has meant, according to the New Republic, that she's attempting to use masculine speech patterns, adopting emphasis rather than a range of tone, which is read as more "emotional."

Clinton's debate performance will also harken back to something that's a relatively old chestnut in gender psychology: as prominent sociologist Marianne Cooper writes eloquently for the Harvard Business Review, "what the data clearly shows is that success and likeability do not go together for women." Clinton is a classic case of this trap: she is the most successful female politician in American history, and her struggle to be "likeable," "approachable," and "huggable" has been the focus of almost every interrogation of her campaign. Successful women, according to Cooper, suffer penalties to their likeability when they do something that breaks with gender stereotypes, like being competitive instead of nurturing, or working alone rather than collaboratively. Or, say, running for President.

And this raises another hilarious problem: if Clinton goes for the jugular and is absolutely ruthless, she'll both succeed and fail. How is it possible, for a female candidate, to look charming and lovely while also tearing strips off a rival? And why doesn't this happen for men? Simple answer: sexism.

Why It's Not All Rigged Against Her

Interestingly, statistics in one area in particular are on Clinton's side: in studies on gender and leadership, it's emerged that female leaders in business are actually often more successful than men, creating better outcomes for the company and happier workplaces for their workers. And perception of competence matters: as Secretary of State, Clinton's approval ratings were high, and a well-established reputation for being a badass might serve her well among viewers when she reaches the podium. Studies of presidential debates have established one thing, though: we're in utterly uncharted territory. We've only just started to look at how HDTV influenced the last presidential debates (apparently it disadvantaged McCain; one imagines it probably won't make Trump look particularly good), let alone having any nuanced understanding of how a woman will fare among audiences while on the podium.

And some commentators are hesitant to think that the gender angle will inherently disadvantage Clinton, thinking that the biggest casualty in the debates will be nuanced ideas, not Clinton herself. "Our political system was built by men for men," historian of American politics Dr. Kyle Livie tells Bustle. "Still, I'd be cautious about saying the debates are male in nature." What matters, he says, is the nature of the debates themselves. "Adversarial in nature, presidential debates have only grown more combative in recent election cycles, as such spectacle excites the most viewers. The debate structures common in modern American politics, including the recent use of the 'town meeting' format, tends to reward reaction rather than reflection. These debates reduce complex issues to mere soundbites and as a result, means that attempts to respond to complexity with complicated ideas falls flat."

We can be confident that Clinton, while going into Sept. 26, is dealing with questions about soundbite culture, voice, approachability, aggression, and passion that no other candidate in history has had to contemplate with such attention. But she's not really one to let handicaps phase her.

More like this
How To Fight For Reproductive Rights, Based On How Much Time You Have
By Courtney Young
34 Quotes That'll Inspire You On Juneteenth & Beyond
By Syeda Khaula Saad and Siena Gagliano
Juneteenth Is Now A Federal Holiday — Here's What That Means
By Lani Seelinger and Syeda Khaula Saad
The Best Thread Count For Sheets To Stay Cool
By Lauren Moison
Get Even More From Bustle — Sign Up For The Newsletter