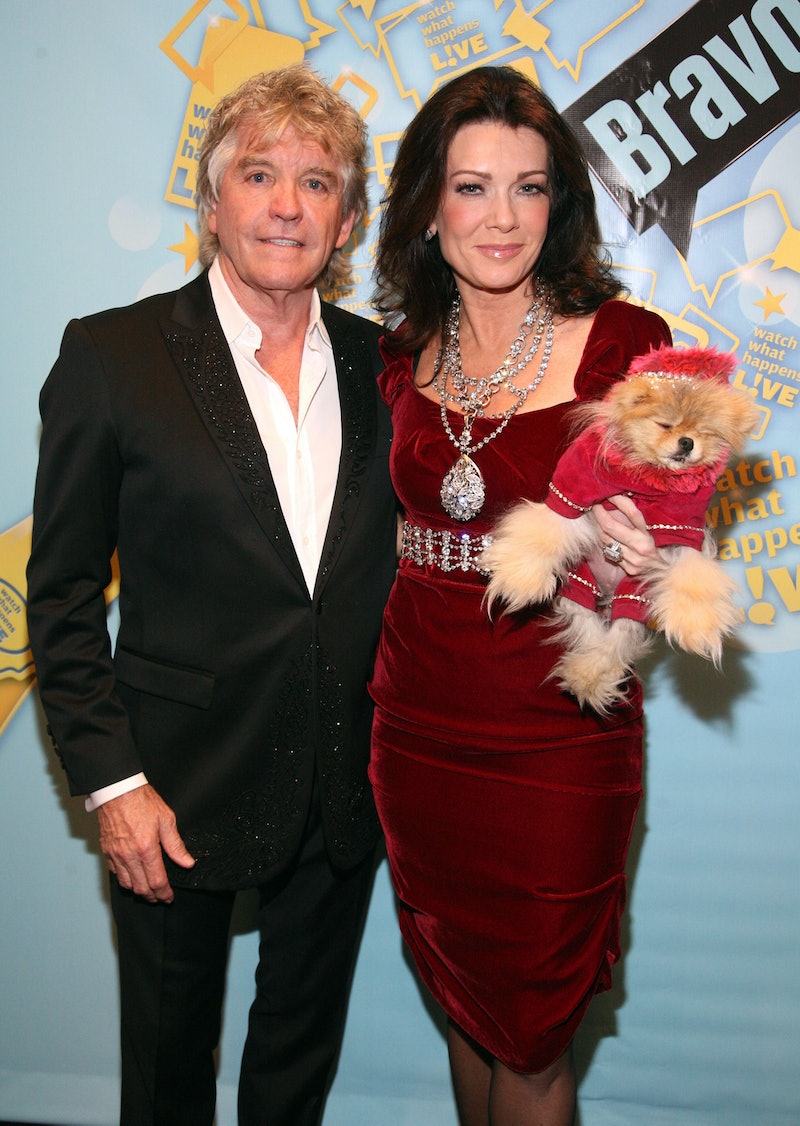 Please do not judge me, but I have to keep it real and admit that I'm one of those people who checks her horoscope on a monthly, weekly, and occasionally daily basis. I know that a lot of it is just conjecture, but other times I read a horoscope telling me that I "deserve to breathe today," and I'll be like "Oh yeah, so true. Very insightful." With that said, I've decided to combine my interest in astrology with my passion for the Real Housewives series. I looked at several Real Housewives couples and learned that some of their fates were pre-determined based on their zodiac signs.

I'm not an astrologist and, of course, I don't actually know any of these people other than what I get to watch on TV and what I've seen on social media, but I do feel like I know them. Nevertheless, based on my Real Housewives knowledge and what I've read about zodiac sign compatibility, the breakups and successes of the Real Housewives couples make a whole lot of sense to me.

Just have fun with this one. This is how some of the most notable Real Housewives couples stack up when it comes to their zodiac sign compatibility. (All zodiac information via astrology-zodiac-signs.com.)

Although we've seen Heather upset by Terry's intense workload, I think that most Real Housewives of Orange County fans can agree that these two are a pretty compatible couple. This makes sense since Heather is a Capricorn and Terry is a Virgo. According to astrology-zodiac-signs.com, this combination has a 99 percent trust score. According to the site, "Capricorn is a sign that can be trusted, and Earth signs understand this best. There is nothing shady about them, nothing unreliable or quick to turn to deceit. Virgo usually has no reason to be unfaithful."

I could never imagine either of the Dubrows straying from the marriage. It's also not surprising that these two signs pair together well in regard to communication and intellect. This assessment definitely describes their little tiffs on RHOC: "They both like a good, respectful debate, and in each other, they can find a perfect adversary." We've never seen Terry and Heather have crazy fights, but whenever they disagree, it's very cordial and they both seem genuinely interested in what the other has to say.

Even though they are no longer a couple, Vicki and Brooks were once the most talked about romance in the Real Housewives universe. No matter how much she tries, I think people will always associate Vicki with Brooks. Vicki is an Aries and Brooks is a Pisces, which does not seem to be a great pairing according to the site. First off, it's very ironic that the "trust compatibility" between these two signs is a super low 1 percent. This part also killed me: "Aries has a tendency not to look behind, question the past, or be too sharp and fast for their relationships." Yep, that's Vicki. The bottom line of the Aries and Pisces relationship is "this is a relationship disturbed mostly by the lack of trust."

The Gorgas' relationship has come under some harsh criticism thanks to the current Real Housewives of New Jersey season. This is because the couple is at odds over Melissa trying to find her independence and open up her own clothing store instead of being a stay-at-home mom, and Joe is having trouble adjusting to that. This dynamic seems to be logical since Joe is a Leo and Melissa's sign is Aries. The Leo and Aries relationship is described as "such a warm and passionate connection, in which sparks fly around all the time," which is indicative of the hot and heavy couple that we've seen over the years on RHONJ. And this sentiment is indicative of their bickering in the current episodes: "For as long as they love each other and stay faithful and true, they will be tied up in a relationship they need to fight for every day. Their main objective is to find a way to enjoy the fight and have fun."

I'm still weirdly sad that this relationship did not work out. It really seemed like these two had that "opposites attract" element, but obviously things did not pan out that way. Bethenny is a Scorpio and Jason is a Virgo, so I'm not at all surprised that the assessment of these signs indicates that "their values might differ, their daily routine might differ too." That really seemed to be the major mismatch with these two: Bethenny was so busy being a reality star and building up an empire and Jason was just a normal dude with a standard job — not that there's anything wrong with that, but their schedules definitely did not line up.

It's also said that with these signs "their choices will differ greatly" when it comes to a lot of things from places to visit to which restaurants to eat at, making compromise a very important aspect for a relationship between these signs. A Virgo and a Scorpio have a "tendency to control each other's lives," which I can definitely see with two people who have such different lives trying to come together as a family.

NeNe and Gregg were this close to becoming a reality TV cliché when they filed for divorce. They ended up getting back together and marrying again, and now, the two seem stronger than ever, so looking at the relationship between NeNe as a Sagittarius and Gregg as a Leo was especially interesting to me. Based on the information about the Sagittarius/Leo combination, "Leo and Sagittarius share a warm love for each other." That is so true. These two are so affectionate and loving. Even when they were fighting on Real Housewives of Atlanta, I still felt a warmth there.

Although the whole assessment of the Leo and Sagittarius love life emphasizes the warmth between the two signs, this one part really stood out to me: The "Sagittarius partner might lose interest in Leo because they tend to get pushed away by their static, fixed nature. The only way they might get to keep their passion and emotions going, is if they manage to listen to their softer emotions and remain tender and sensitive for one another." I feel like that is totally applicable to NeNe divorcing Gregg, and them eventually communicating better when they got back together.

Even though there are so many great pairs to choose from, Kim and Kroy are my favorite Bravo couple. They really seem to bring out the best in each other. My assessment of this match makes a lot of sense since Kroy is a Virgo and Kim is a Taurus. "The sexual relationship between a Taurus and a Virgo can be quite touching. Virgo partner is usually ashamed to show their sexuality, or their body for that matter. This is where Taurus gets in the picture as a hero setting their Virgo free," according to the site. This screams Kim and Kroy. Kim is obviously a pretty outrageous personality and Kroy is more reserved, but together they really are a perfectly balanced combination.

These two are the most controversial couple in the franchise right now. While it seems like no one approves of the relationship, they are contributing to some golden TV moments, so I am personally a fan. Luann is a Taurus and Tom was born on New Year's Eve, which makes him a Capricorn. Astrology-zodiac-signs.com explains these two signs: "Capricorn doesn’t fall in love deeply enough or has trust issues. This will be multiplied by Taurus’ need to be loved unconditionally that they show in an endless loop, scaring their Capricorn away." This seems to fit their story line to a T. Tom has been known for being in some not exactly deep relationships with other cast members, and we all know that Luann loves being in love, so this lines up.

Cynthia is a Pisces and Peter is a Libra, and this duo scores only 50 percent in regard to "sexual and intimacy compatibility," according to astrology-zodiac-signs.com. The most telling thing from this (lack of) love forecast is that the level of trust between these two signs is 1 percent. The site says, "the only way for these partners to remain in a trusting relationship is to approach it casually and build their understanding and trust from zero, as if they have never had any relationships prior to this one." It also says, "The questioning of Libra will raise suspicions in Pisces with painful ease."

When Tamra first joined Real Housewives of Orange County, she and her then-husband Simon were all over each other. As we all know, they obviously did not stay together since she is now married to Eddie Judge. But since Tamra is a Virgo and Simon is a Taurus, it does make sense that they seemed to have such a heated relationship since this pairing scores an 85 percent in the category of sexual intimacy and compatibility. As time went on, it really didn't seem like Tamra and Simon were a good fit, which makes this description stand out: "Taurus can be really static and it is important that they make a decision to follow their partner or they really won’t have much of a future together." I can't help thinking about Simon getting tired of the Real Housewives thing and all the drama that came with that world.

Kyle and Mauricio are one of the most solid couples in the franchise. They really fit together well and that could be because Kyle is a Capricorn and Mauricio is a Cancer. This is a good zodiac sign combo based on the astrology-zodiac-signs.com assessment: "Cancer and Capricorn are opposing signs and there is a strong attraction between them. When they get together, a passion awakens and they both become perfect lovers for one another." This really does sound like the two of them. The description also says, "one of them should be family oriented and the other turned to their career," which makes sense since Kyle is the queen of the home front and Maurio is a real estate king. Given that Mauricio has been Kyle's ride or die throughout her drama with her sisters, it's definitely fair to say that "they will value most in each other, the ability of both not to quit or give up, however hard things might get."

It's super interesting to me that Lisa and Ken are both Virgos. I was curious about how a compatibility assessment would assess the differences and similarities between two people with the same zodiac sign. In a not at all surprising turn of events the Virgo and Virgo romance is a stellar combination. According to the site, the Virgo and Virgo "relationship is a product of one of two possible things, the first one being the need for stability and their rational decision to be with one another, and the second one being the unexplainable force of love at first sight." This is so Ken and Lisa since they got married after knowing each other for six weeks. Plus, they are arguably the most stable couple in the franchise.

I know that a lot of people don't believe in astrology, but it is definitely interesting to see how the fate of these relationships stacks up based on the compatibility of their zodiac signs.