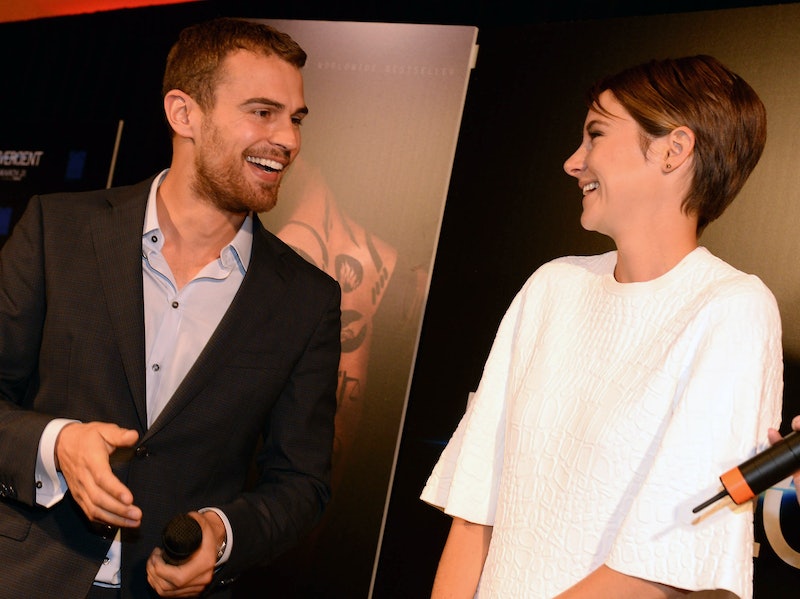 Often times it's all too obvious when actors paired on screen want nothing to do with one another. Remember Jennifer Aniston and Paul Rudd in Wanderlust? Keanu Reeves & Carrie-Anne Moss in the Matrix movies? Or Farley Granger & Ruth Roman in Hitchcock's Strangers on a Train? All great actors, but two great actors does not equate to a great romance. Such was the challenge in casting 2014's YA-to-blockbuster series, Divergent . The producers of the film, out Friday, were set on having Shailene Woodley as their lead, but casting her male counterpart proved more difficult.

"Shailene emerged to all of us in a pretty strong way. For the guy, we were in trouble," director Neil Burger said. "We were seeing all of the young stars in town, and as we brought each of these guys in to read with Shailene, she blew them away. She made them seem weak. So we kept looking and finally we tested Theo [James], who in the first moment, was so exactly right. He's a great actor, he has an incredible screen presence, he is a great fighter, he really has it all."

Theo James, known to most as the man who died in Lady Mary's bed on Downton Abbey, is an English actor who was far on the list of potential actors to play Four, the love interest to Woodley's Tris. But the reason behind the producer's choice is apparent on screen. From the moment Woodley and James share screen time, a dangerous and insatiable tension is at play.

"I just wanted to practice the kissing scene with Shai as much as possible. I'd say 'Listen, after dinner we could just go over that scene again,'" James divulged.

"The kissing scene with Shai and I, we wanted that to be as good as possible. Because it's the only scene where [Four and Tris] get together, and we wanted it to be real and not just be lots of cheese. So, we shot that a second time because the first time it didn't feel right, and we wanted to honor it in the way that it earned. There's not lots of banging eyelids and fauning towards each other. It's quite a functional, tough, intricate relationship."

In the film, Tris is a teenage girl who chooses to leave her family to join an elite group of police-type protectors called Dauntless. Four is a leader of Dauntless, and one of Tris' tough-as-nails mentors.

"She is facinsated by him but doesn't understand his motivations. He seems to be very cold, momentarily hot," James said. "He sees in her something unique and dynamic. It's an interesting relationship because it's not based on lots of swooning, it's based on two people who respect each other. He really respects her and sees that she is completely selfless and strong," he said.

For British James, Four was a character he was instantly attracted to for his innate sense of manliness, a trait he didn't need to show with muscles or harsh words. "I love this person who you don't really know what hes thinking. He's the type of person that walks into a room and doesn't need to be the loudest voice but you still feel his presence," James said. "He doesn't speak too much, but you know that he's thinking all the time. He's a very perceptive person, and he has a dangerous stillness. I love masculine characters who don't have to be shouting in someone's face, or weilding their masculinity in a way that's jamming it down someone's throat."