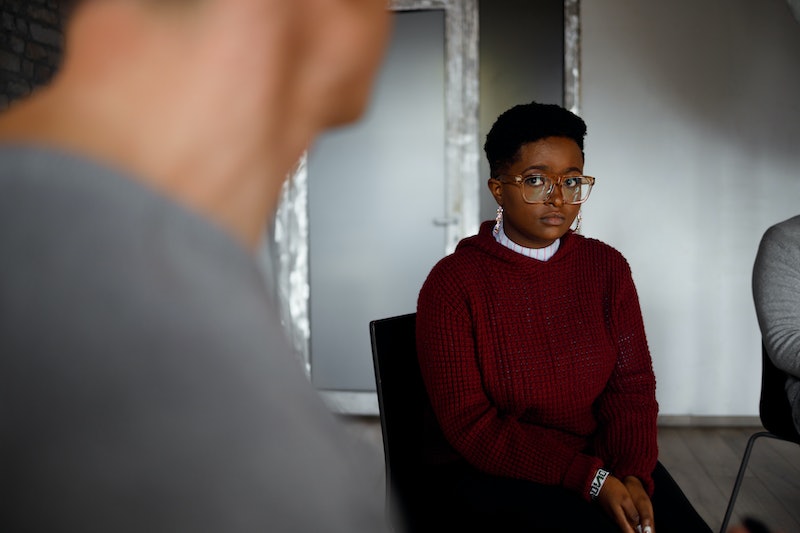 As a new debate over racism and police brutality explodes over the shooting of Terrence Crutcher by police in Oklahoma, it can be dispiriting to reflect on race relations in America in 2016. But a new study published in PLOS Biology this month has revealed that there may be a new method for re-training the ways in which the brain perceives faces, shifting its perspective from positive to negative. It's adding to a growing amount of science that reveals that racial bias in the brain, even if it's implicit (where the person insists they aren't racist but the brain reveals they are), doesn't have to be set in stone. And this might prove to be the key to shifting racial issues; but it's not as simple as everybody going to a compulsory racial bias class once a month.

Implicit racial bias is a pretty established area of neuroscience. There are many famous studies that indicate its presence, from the Harvard Implicit Associations test that shows white people take longer to attribute positive words to black faces than white ones to another that demonstrates people often sit further away from other races. (Why this bias exists is a bone of contention: some academics believe that, as humans, we're inherently likely to view "different" people as threatening, since we evolved in small groups that were always on the defensive.)

The notion that we can change our brains to fundamentally address these issues is, however, a relatively new one; we're discovering that our brains are a lot more "plastic," or malleable, than previous scientists believed. Reprogramming the brain is less dream and more interesting reality, though we're still figuring out precisely how to do it. "The power of neuroplasticity to transform the emotional brain," writes Sharon Begley in The Plastic Mind , "opens up new worlds of possibility. We are not stuck with the brain we were born with." So is the new study a breakthrough for the future of race relations, a lot of hot air, or something more complex?

What The New Study Says About Unlearning Racial Bias

Previous studies of implicit racial bias have discovered that it's both extremely widespread and often subconscious; but when it comes to re-training the brain, we're entering new territory. The new study centered on the cingulate cortex, a small area of the brain that's activated by emotional stimuli, memories, and attention. The scientists behind it at Brown University found that actively shifting the responses of the cingulate cortex helped to change peoples' feelings towards images of faces. And they didn't even need to poke the brain or attach electrodes to it; they could just get the participants to "exercise" the cortex repeatedly to change their thinking.

The subjects were first shown a lot of pictures of faces while the cingulate cortex was monitored; it shows different responses when we see faces we like and faces we don't like. (The racial component of this is obvious. Even if we say aloud that we don't have negative feelings towards the faces of different races, our brains don't lie.) Then they were given an interesting task: First they were shown a face that their brains had viewed as neutral; then, directly afterwards, they were shown a picture of a disk, and told to "use their brains" to make it bigger. They weren't told that the only way to improve its size was to use their cingulate cortex in a particular way. Some of them had to think in the same way they did when they saw a face they liked; the others had to think in the way they did when they saw faces they didn't like.

This sounds absurd, but all the participants figured it out and flexed their cingulate cortex muscles accordingly, making the disks bigger and bigger. And after three days of hour-a-day brain training, the scientists tested the results. It was pretty astonishing: the people who'd been bench-pressing their cingulate cortexes to think about positive faces rated previously neutral faces as positive, and the ones who'd been channeling negative thoughts looked at neutral faces and went "nope nope nope". They'd actually trained themselves to emotionally react to faces in different ways. So is brain exercise the key to undoing racism in neuroscience?

How We Can & Can't Retrain The Brain To Be Less Racist

Exercising the cingulate cortex is only the start. The Brown University study is a new entry in an increasingly fertile field of science about how we can alter the brain's responses to try and rewire, shift, and disable implicit biases, preventing racist responses and creating a more racially harmonious world. Glass-half-full thinking? Maybe, but as we'll see, the science behind it is solid, if complex.

A study in 2015 showed that implicit bias, both racial and sexual, can be targeted in another way: through sleep training. Participants were given "counter-bias training," where faces were shown with non-stereotypical words beside them (black faces, for instance, had positive words like "sunshine") while certain distinctive sounds played. When those sounds were played again, at an unobtrusive volume, during the participants' afternoon naps, they showed that the effects stuck: they associated the positive words with the pictures more readily. This sort of approach is gaining increasing popularity; the Washington Post reported in August that the Justice Department is attempting to instal implicit bias training across multiple levels in response to evidence of racial prejudice in the nation's police force (though some people are a bit skeptical about whether it will work).

There are other methods, but they haven't necessarily met with great success. One much-hyped idea was to artificially increase empathy, making people sympathize with those of other races through stories or movies; but The Atlantic reported in July that researchers had found these measures didn't have great success, with one notable exception. If white participants were read stories in which they were being attacked by a vicious white person and saved by a valiant, heroic black person, their implicit bias scores plummeted; but without the vicious white villain, the story had little to no effect.

"Solving" racism using science is unlikely; even with exposure, friendliness, empathy, and attention, the brain may not be sufficiently rewired to give up its implicit bias. And it's important to note that the brain is vulnerable both ways. Brainwashing may be a standby of the movies, but this kind of research shows that it's easier than one might think to program a brain to believe certain things, through coercion, social pressure, unconscious cues, or other means. Neuroplasticity, as it's called, can be used to stoke hatred as much as it can provoke understanding.

Also, overt racism, where people wander around openly holding racist beliefs, is another matter entirely; a study just released indicates that high overt racism levels negatively impact the health of entire communities. Outspoken racial hostility may need more than sleep training or brain association before it can stop causing complete chaos. Implicit bias is only ever a part of a much bigger problem.

More like this
How To Fight For Reproductive Rights, Based On How Much Time You Have
By Courtney Young
Megan Barton-Hanson On Bi-Visibility & The Need For LGBTQ+ Love Island
By Sam Ramsden
12 LGBTQ+ Organizations To Donate To During Pride
By Mariella Mosthof and Bustle Editors
Black Pride's Lady Phyll Is Already Thinking About The Next 50 Years
By Sam Ramsden
Get Even More From Bustle — Sign Up For The Newsletter