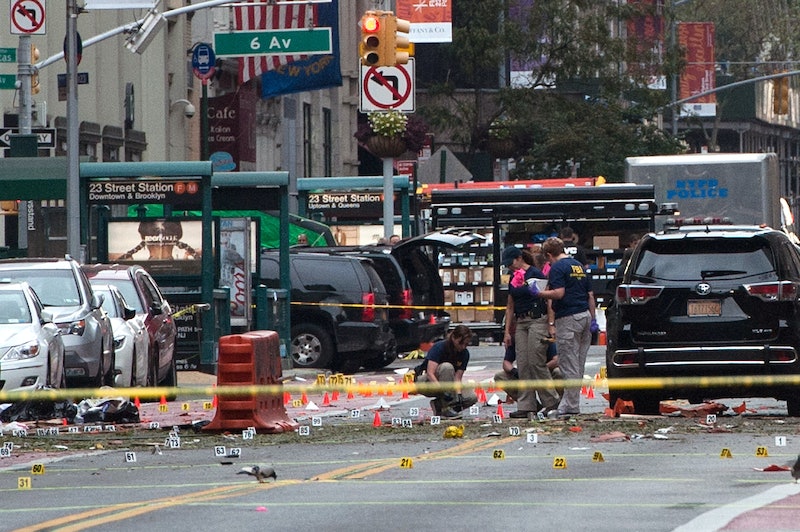 In the scary aftermath of Saturday's explosions in New York and New Jersey, the NYPD has arrested a suspect in connection with the attacks. Police identified Ahmad Khan Rahami, and introduced several charges against him, after a shootout that injured two police officers. However, Rahami's capture has elicited a confusing and somewhat disturbing response. Some have taken to Twitter to condemn supporters of the Black Lives Matter movement for their supposed hatred of the police who work to protect citizens from terror attacks.

Obviously, this is an extreme — perhaps purposeful — misunderstanding of BLM. The movement does not actually hate the police, as detractors tend to claim. As stated on the BLM website, its members "are committed to collectively, lovingly and courageously working vigorously for freedom and justice for Black people and, by extension, all people. As we forge our path, we intentionally build and nurture a beloved community that is bonded together through a beautiful struggle that is restorative, not depleting." The BLM movement is all about building a community for black people who seek equal treatment. They are not against police officers; they are against police officers using their power to oppress black people.

That didn't stop some Twitter users from equating distrust of some police to thinking they are unnecessary. After Rahami was arrested, many rightfully praised police for keeping our country safe, but some couldn't help adding in a random dig against BLM, implying that they are ungrateful for the service of our country's officers.

Calling BLM "cop haters" is ridiculous, and completely misses the point. Also, assuming that those who protest police brutality aren't thankful for those who rightfully and respectfully protect their country is missing the point.

This sarcastic tweet is full of nonsense. The implication that protesters are just full of destruction, and do not positively contribute to the community, unlike police, is untrue.

One congressman even brought NFL player Colin Kaepernick's protests into the conversation, tweeting that the football player should be thankful for the police.

Detractors of the movement make it very clear that they believe BLM supporters hate police with headlines like "Black Lives Matter Activist Changes Tune On Police Following Robbery," about a University of Houston student who was robbed and called for more police presence around his college apartment building. We're apparently meant to believe that before the incident, he didn't think police officers were necessary to the community, and that now that he encountered a situation in which he needed them, he's suddenly pro-police.

Founders of BLM recently participated in the Social Good Summit in New York to discuss racial justice. During the panel, activist Brittany Packnett explained how BLM is hoping to continue its work spreading education. "We are in a state of maturation. We are in a place where we are figuring out how we can take the more nuanced conversation and the more truthful narratives to a place of real change." It's a fitting description of what BLM has worked for thus far: sparking conversations about police brutality, and awakening more Americans to the plight of discrimination.

Black Lives Matter is not seeking to eliminate police throughout the country, but rather to promote equality and see the end of police brutality. To portray it any other way is a grave misunderstanding of the movement.