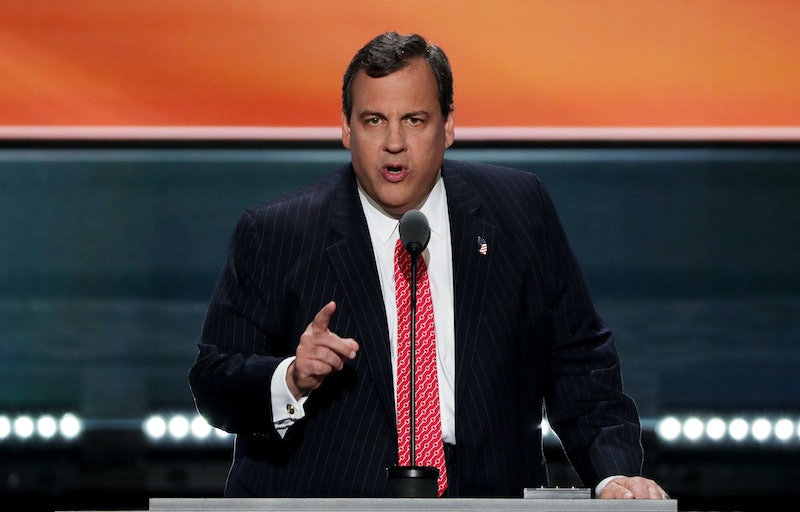 The last time a roomful of people were screaming "Guilty!" at Chris Christie, he was having the time of his life. After losing the Republican presidential primary to Donald Trump and being passed over for the vice presidential spot, Christie seemed to recover his dignity onstage at the Republican National Convention in July, leading the crowd in a mock prosecution of Hillary Clinton, with the audience chanting "Guilty!" Oh, the irony. On Monday, federal prosecutors alleged that Christie lied about his involvement in Bridgegate to the American people.

"Bridgegate" — the lane closures on the George Washington Bridge in 2013, were allegedly implemented by Christie's office in order to punish Fort Lee mayor Mark Sokolich, who had declined to endorse the New Jersey governor's reelection bid. An infamous email from Christie's former deputy chief of staff Bridget Anne Kelly, which was found by investigators, read, "Time for some traffic problems in Fort Lee." Christie's office fired Kelly, but vehemently denied that the governor himself knew anything about the plan.

But federal prosecutors claimed that Christie knew about Bridgegate during opening arguments of the trial for Kelly and Bill Baroni, former Port Authority deputy executive director. They are being tried for conspiracy and fraud. Department of Justice public affairs officer Matthew Reilly told CNN that his office had not filed any charges against Christie as of Monday, but would not comment on whether any such charges would be forthcoming, citing departmental policy.

On Sunday, Christie appeared on CNN's State of the Union, saying, "I really don't have any knowledge of this incident at all."

Less than two short months ago, Christie was on top of the world. The RNC was largely a dull affair, notable primarily for its conspicuous absences (the three most recent Republican nominees for president, among others), but Christie's speech electrified the room. Christie's point was clear — Clinton, he warned, was a liar. And do you want a liar as your president? Each time he asked the crowd to render a verdict, they were happy to oblige.

We cannot make the Chief Law Enforcement Officer of the United States, someone who has risked America’s secrets and lied to the American people about it, day after day after day.

In his fiery speech, Christie's contempt for deceit appears obvious. His campaign slogan, after all, was "Telling It Like It Is." But if the allegations that Christie was aware of the Fort Lee lane closures turn out to be true, his anti-lying crusade of an RNC speech will be a whole lot harder to take seriously. Of course, that may be the least of Christie's problems.