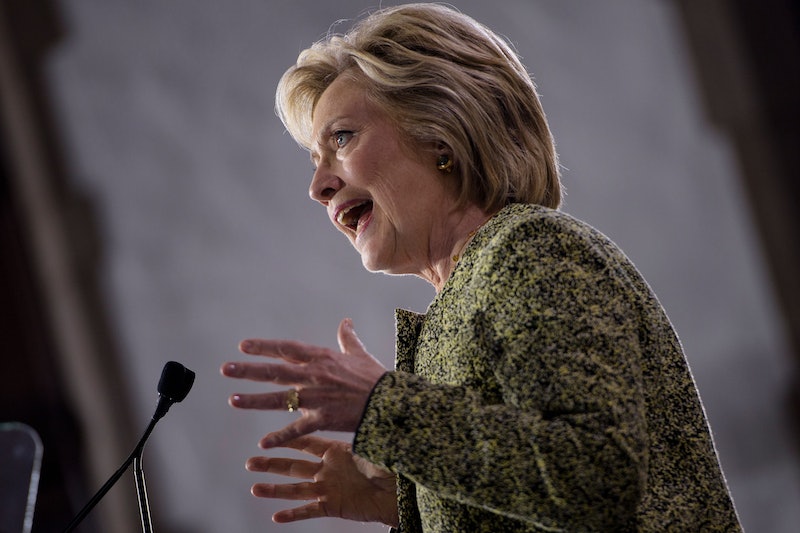 In a press conference Monday morning, Democratic candidate Hillary Clinton called out Donald Trump’s rhetoric as giving “aid and comfort to our adversaries.” The presser followed a weekend of violence which included explosions in New York and New Jersey and a stabbing attack at a mall in Minnesota. Clinton’s choice of words was very specific, and some have noted that it closely mirrors the language in the U.S. legal code that defines treason.

The Trump campaign hit back at Clinton swiftly, charging that her “comments today accusing Mr. Trump of treason are not only beyond the pale, it’s also an attempt to distract from her horrible record on ISIS,” as spokesperson Jason Miller said in a statement. The statement went on to say that if “Clinton really wants to find the real cause of ISIS, she needs to take a long, hard look in the mirror.”

But the Clinton camp didn’t even bat an eye before brushing it off with their own wry, incisive response. In a statement released by Clinton spokesman Brian Fallon, her campaign fired back, saying coolly that “The Trump campaign can call it whatever they want.” Cue my mental image of Clinton delivering that dry zinger before taking a sip of a martini and then reclining against her comfiest throw pillow.

While the Clinton campaign was careful to avoid accusing the GOP candidate of treason outright, their linguistic maneuvering shows a cleverness that I find strangely comforting. The tête-à-tête between the two camps may make for some exciting wordplay, but it also underscores two important points.

The first involves the substance of Clinton’s critique — that Trump’s rhetoric is dangerous. Earlier in September, UN High Commissioner for Human Rights Zeid Ra'ad al-Hussein gave a harsh critique of right-wing populist leaders around the globe, including Trump. He said that what these leaders have in common with each other they “also share with Daesh [ISIS]. “Both sides of this equation benefit from each other — indeed [they] would not expand in influence without each other's actions,” Hussein stated. I believe that tying Trump’s flame-throwing to ISIS’ success is an absolute necessity for Clinton in the closing weeks of this election.

But the second is that Clinton has come back from her bad weekend ready to fight. If she can keep up this kind of direct, unrelenting, and frank assault on Trump’s suitability, viability, and credibility as a potential president — while still remaining presidential herself — things might not be quite as dire as they seem.

If she can do it with a wink and a little flair like she’s done today, well, so much the better.