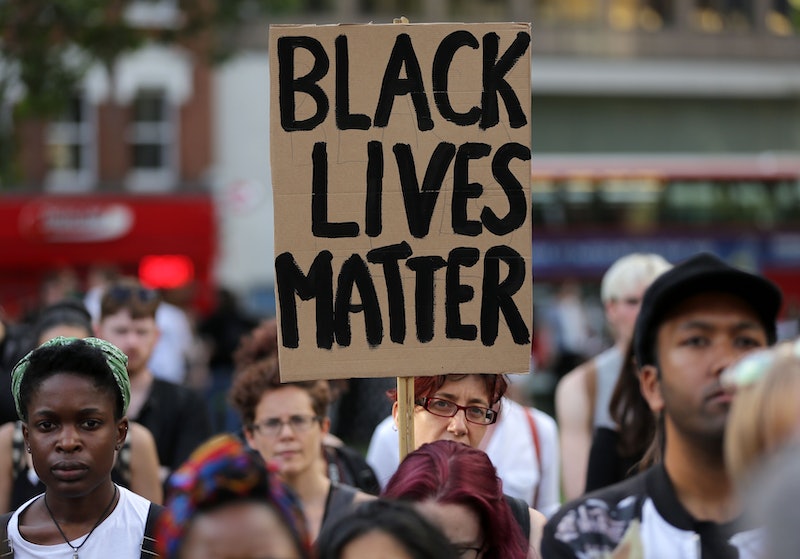 Recently released video footage shows Terence Crutcher, a 40-year-old unarmed black man, being tasered and fatally shot moments later by a white police officer in Tulsa, Oklahoma, on Sept. 16. Bustle has reached out to the Tulsa Police Department for comment. The police footage shows Crutcher approaching his car, which had reportedly stalled in the middle of the highway, with his hands in the air. Seconds later, he can be seen falling to the ground as officers reportedly tasered and shot him. Crutcher's tragic death marks the 14th fatal shooting of an unarmed black man in 2016 alone, according to a Washington Post database.

It seems that by all accounts, the evening could have ended without incident. According to the Post, Crutcher was driving home from his music appreciation classes at Tulsa Community College when his SUV broke down on the highway. But somehow, a minor inconvenience turned into a fatal shooting. Upon responding to reports of a stalled vehicle, officers reportedly approached Crutcher, who was standing near his vehicle. In the police footage, Crutcher reportedly walks to his car with his hands up, but was tasered and shot moments later by two officers.

Police claim that Crutcher was not complying with repeated commands from the officers to stop walking to his vehicle. Investigators found no weapons on Crutcher or in his vehicle. The U.S Justice Department, as well as the local state department, have issued investigations into the shooting, and will determine if charges will be filed against the officers.

Crutcher's family, friends, and community members, who were allowed to watch the video footage before its official release, are coming together to say that Crutcher was not the "bad dude" that police reportedly called him, but a beloved family member and friend.

He was a father of four, a college student, and a member of his church's local choir, where his pastor said he attended "faithfully" with his family for years, according to local newspaper Tulsa World.