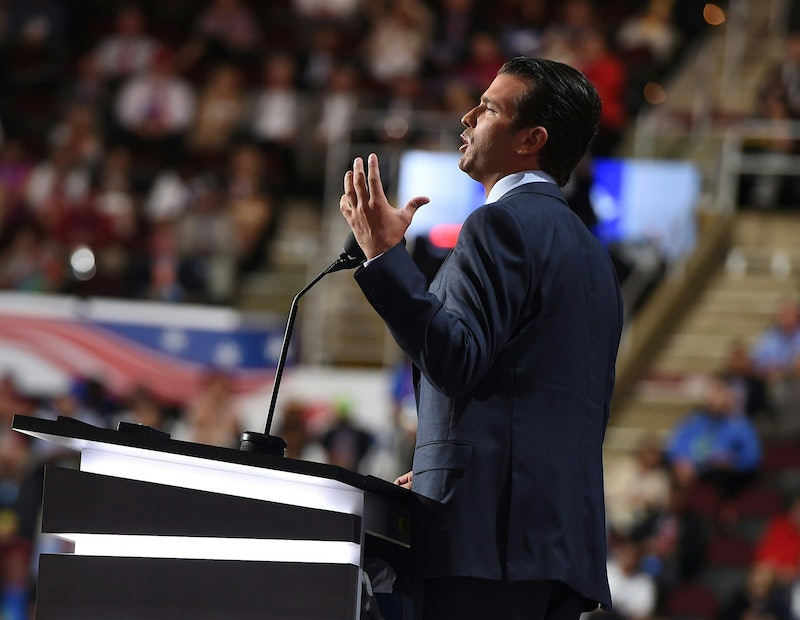 Republican nominee Donald Trump has already warned his supporters to "lock their doors" to keep safe from Syrian refugees entering the United States, and judging by an absurdly tone-deaf tweet Donald Trump Jr. posted about Skittles and Syrian refugees, the apple doesn't fall too far from the tree. In the tweet, Trump Jr. compared the complex refugee crisis — which has seen as many as 14,000 refugee children killed — to a bowl of Skittles.

Trump Jr. isn't known for his tact on Twitter. He once tweeted to a user who criticized his father's campaign: "Well I guess we lost your vote and that of your 0 followers. If u want to criticize don't hide behind a ghost account p****!" among many other tweets that seem almost unbefitting of a reality star turned politician's offspring. But it doesn't get much worse than this most recent attempt at analogy.

The tweet featured an image of a bowl of Skittles, asking Trump Jr.'s some 660,000 followers: "If I had a bowl of skittles and I told you just three would kill you. Would you take a handful? That's our Syrian refugee problem." (The grammatical errors are original to the image, and the Trump-Pence logo underneath suggests that it was crafted by the campaign).

There's something obviously disturbing about the fact that a presidential candidate's son is attempting to distill the complexity of the refugee crisis down to a bowl of Skittles. Human beings aren't candy, and should never be compared as such — something that has been mentioned by the flurry of angry tweets Trump Jr.'s image set off.

But it's no wonder that an image like this, as terrible as it is, made it into Trump Jr.'s Twitter feed. He is essentially just reiterating the commentary that his father makes on the daily.

Following the attacks in New York on Sept. 18, Trump again called for a suspension of immigration into the United States:

The type of messaging voters saw from Trump Jr., and likely from the Trump campaign itself, on Twitter isn't just dumb, however — it's outright dangerous. Equating suffering human beings to food gives a clear glimpse into how a Trump administration would deal with the plight of our fellow man both domestically and abroad. The talk of "safe and adequate screening" just masks something deeper.