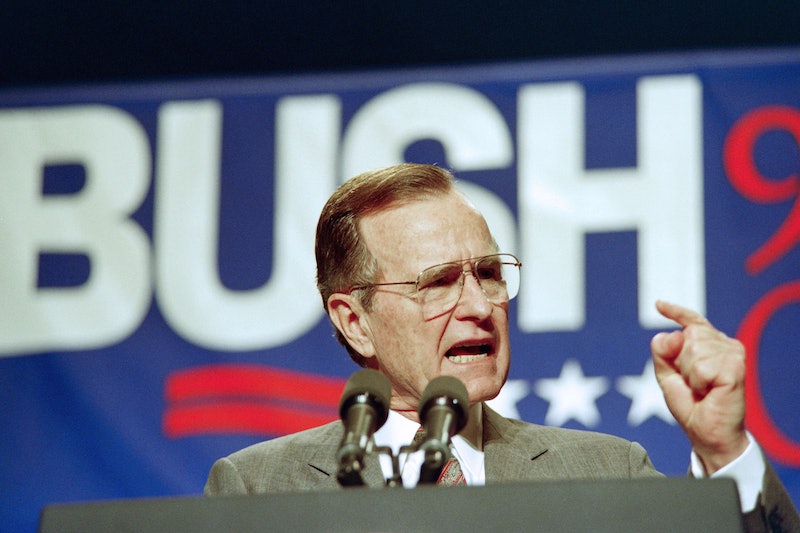 Flashback to the first Clinton race for the White House in 1992, Bill's that is, and his opponent was George W. Bush's dad. Bill, of course, prevailed, and ever since, the two political dynasties have taken turns running for the top job. This year, Hillary could have been up against brother Jeb Bush had the primaries gone a different way... but you know how that turned out. Now, the day has finally come when you have to ask yourself: is George H.W. Bush voting for Hillary Clinton? Though one woman claims his decision has been made, he has declined to comment and is keeping his vote private.

The news was first reported by POLITICO, and nothing has been confirmed by H.W.'s spokespeople, but here's what happened: Bush planned on staying out of the presidential endorsing business. He didn't like Trump and declined to endorse him. And that was that. Until Kathleen Kennedy Townsend, the daughter of Robert F. Kennedy and the former lieutenant governor of Maryland, went to visit.

After posing for a photo with the former president, she uploaded it to Facebook with the caption, "The President told me he's voting for Hillary!!" Bush, now 92, is sitting in an arm chair and Townsend poses next to him. Just to be sure, POLITICO followed up with a phone interview, and Townsend reiterated that's what H.W. told her. However, Bush himself has not confirmed on whether the statement is true or not.

None of the other Bushes are on the record about who they'll vote for. Jeb has said he will not be voting for Trump, but he stopped short of endorsing Clinton. "I can't vote for Hillary Clinton and I can't vote for Donald Trump, and it breaks my heart," Jeb told MSNBC in an interview that aired in July. "This is my the first time in my adult life I'm confronted with this dilemma." Soon after, Jeb wrote in a Washington Post editorial that he'd either be voting Libertarian or writing in a candidate.

George W. Bush has been mum on the race since Jeb dropped out. An aide told POLITICO back in March that an endorsement during the primary campaign was unlikely. That was reiterated in May when personal aide Freddy Ford told The Texas Tribune that W. "does not plan to participate in or comment on the presidential campaign." Some members of his administration have come out for Clinton, though.

It's been clear for a while that no living presidents will endorse Trump. Whether one of them going for Clinton will make a difference in the broader race remains to be seen.