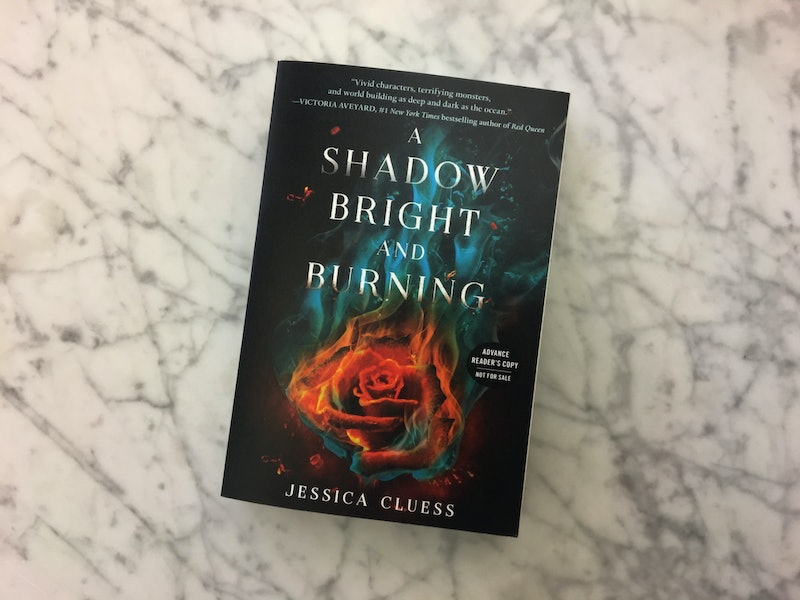 Consider this your introduction to your next fantasy favorite: A Shadow Bright and Burning is a Victorian Era-fantasy that subverts all those YA tropes we've grown tried of: chosen one prophecies, love triangles, and schools for magicians. Yes, people say Henrietta is the chosen one — but is she, really? Yes, there's a love triangle — but don't expect it to end with just three people. And yes, there's a schools for sorcerers, but it's nothing like you've seen before. Bustle has an exclusive interview with author Jessica Cluess and an excerpt from the novel, out today from Random House.

A Shadow Bright and Burning is the story Henrietta Howel, a poor orphan girl who can burst in flames. Literally, she's a girl on fire. When her abilities are discovered by a mysterious sorcerer, she's brought to London to train with fellow sorcerers — all men — and discovers that she just might be the chosen one who can end mankind's fight against the Fae. Along the way, she'll have to prove that she's just as good as the boys (because, of course she does) and decide what she's willing to risk in her quest to save the world and the people she loves.

Author Jessica Cluess says "Charlie Hunnam with his shirt off" sparked the idea for her girl on fire — and she's not just being facetious.

"This is actually sort of true. I'd been watching the 2000s version of Nicholas Nickleby. The scene that inspires me was the part where Nicholas physically stops an assault on a helpless boy," Cluess tells Bustle. "As I was walking to work the next day, I couldn't help wondering how a girl in the Victoria Era would've handled that situation... I imagined different scenarios where the girl used something, and then I had this picture of her opening her hands and shooting fire out of them. I stopped dead on the sidewalk, because I knew I wanted to write about this girl."

When the girl in question, Henrietta, moves to England, she brings along her childhood friend Rook, a stable boy with constant, debilitating pain as a result of being "marked" by the Fae. His storyline will be important to the plot of the novel, as will the stories of her two other love interests: Magnus and Blackwood, two sorcerers with very different backgrounds and very different personalities. Though readers may groan at the idea of a love triangle (erm, square?), this novel never lets the romance take centerstage. "I get why people give it the side-eye," she says. "A love triangle can sometimes be code for 'I don't care if there's a world that needs saving, I must figure out which of these boys I yearn to kiss.' I tried to make sure Henrietta's journey stayed focus on the war and her quest for self-understanding."

Cluess promises that all three love interests will all have their own story arcs — and their journeys may inevitably push them further away from Henrietta. One character, in particular, exhibits a relationship with the heroine that feels like a major homage to Pride and Prejudice, with the love interest (I'll let you figure out which one) as Mr. Darcy and Henrietta as Lizzie Bennet. "Any time you have a plucky woman challenging a snooty man who's higher up the social ladder, you're going to get some Pride and Prejudice vibes," Cluess says. "But as the series goes along, that dynamic is going to change."

A Shadow Bright and Burning is the first book in a trilogy, Kingdom on Fire, so except plenty more of Henrietta, Rook, Magnus, and Blackwood in the years to come. Cluess says revisions on book two are coming along, and she's bouncing around ideas for future books.

So what's her advice for fellow debut fantasy authors? "You have to love what you're doing, without questions," she says. "And you have to try to make the characters' feelings and relationships as real as possible. Because so much wacky stuff happens in this genre — what with talking swords and goblins and faeries and so on — if the emotions aren't real, the reader won't be able to buy any of it."

Bustle is proud to present an exclusive excerpt from Jessica Cluess' A Shadow Bright and Burning, out Sept. 20 from Random House. In the excerpt, Henrietta and Rook discuss her powers and the mysterious waning of his constant pain:

That night, while the upstairs resounded with laughter and song, I snuck away from the celebration and ran down to the stables to find Rook. Perhaps it was the high of victory, but even the stables appeared transformed in some strange way. The world around me was reborn.

Perhaps it was the high of victory, but even the stables appeared transformed in some strange way. The world around me was reborn.

He was in the middle of rubbing down a horse when I knocked on the stall door. The animal nosed my hair, attempting a graze. Giggling, I waved my friend out and flung my arms around him.

“We’re saved,” I whispered. All the awkwardness between us melted away. It was as if our last argument had never occurred.

“I wish I’d seen it,” he said, twirling me about in a circle. “Can you tell me how you managed it?”

“One day, when this is all over, I swear I’ll give you every detail. It may surprise you.” Rook set me down. He looked wonderful. His eyes were bright, and I’d never seen him wear such a carefree smile.

“What?” He laughed, noticing my stare.

“Then I look as I feel,” he said, picking me up by the waist. I mock-shrieked as he set me atop a saddle and returned to his work. “When a night’s sweet like this, how could I do otherwise? You’ll be commended, the greatest sorcerer of the age.”

“Second-greatest, to hear Magnus talk of himself,” I said, rolling my eyes.

“No!” I jumped off the saddle. “Gone completely?”

“Haven’t felt a twinge in days. Do unmarked people always feel this good? If so, how do they ever find the time to be angry?”

“This is the most wonderful news! It’s the medicine Lord Blackwood described, isn’t it? He’ll never let me forget this great favor of his.”

“Have no fear,” Rook said with a grin. “You owe him nothing. I’ve stopped taking the medicine.”

“What?” My smile faded. “Then how do you suppress the shadows?”

“Oh, I don’t,” he said. “See?” He waved behind himself as illustration, and I understood.

Upon my arrival, I’d thought that the stables’ different appearance was due to my excitement. Now I realized that half the yard lay cloaked in deep shadow. Not even the strong light of the moon could penetrate it. The horses were more silent than usual, standing watchful in their stalls.

Upon my arrival, I’d thought that the stables’ different appearance was due to my excitement. Now I realized that half the yard lay cloaked in deep shadow. Not even the strong light of the moon could penetrate it.

“Don’t worry,” Rook said, his voice soothing. “I do it when no one’s about. It keeps me in good practice.”

“But I thought the shadows came only when the scars hurt.”

“So did I, but the most extraordinary thing happened. Just as I was going to ask Mr. Fenswick for the new potion, the pain stopped. For the first time since I can remember, the suffering left. Do you see? I hurt because I couldn’t use my power.”

Rook was no longer living in the prison of his own body. Tears blurred my vision as I wrapped my arms about him.

“Why are you crying?” he whispered.

“I’m so happy,” I sobbed, pressing my cheek to his chest. His heartbeat was loud and steady in my ear.

“Now I have everything,” he muttered into my hair. The air between us seemed to crackle with energy. It occurred to me that all I had to do was raise my head, and something would happen. I felt that he was waiting for me to grant permission. And though I’d promised myself no complications, I found I was slowly tilting my chin. . . .

The air between us seemed to crackle with energy. It occurred to me that all I had to do was raise my head, and something would happen.

But the darkness was behind me. It was touching my skirt. It was reaching for me. It was wrong—

“I need to go back upstairs.” I broke from him so suddenly that he nearly tipped over. Part of me was screaming to stay; most of me had the uncontrollable urge to run. “The boys and Master Agrippa will wonder where I’ve gone.”

“Of course.” He didn’t sound put out in the slightest. “There’s time for talk later, after you’re commended.” Rook smiled at me.

His eyes were pure black.

You must get used to it. It’s his power, the same way fire is yours, I thought. For the first time, he’s free.

“I’ll come see you later,” I said, forcing a smile. Rook turned back to his work, whistling as he did so. Going inside the kitchen, I sat on a bench and passed my hand before my eyes. Honestly, I was acting like a child. Today I’d been given everything I could have ever asked for, and here I was, worrying. If Rook’s pain was finally gone for good, then that was worth everything.

Yet I couldn’t help but shudder as I returned to stand in the doorway and watch him at work, singing while the shadows ebbed and flowed about his feet.

A Shadow Bright and Burning by Jessica Cluess, $11, Amazon