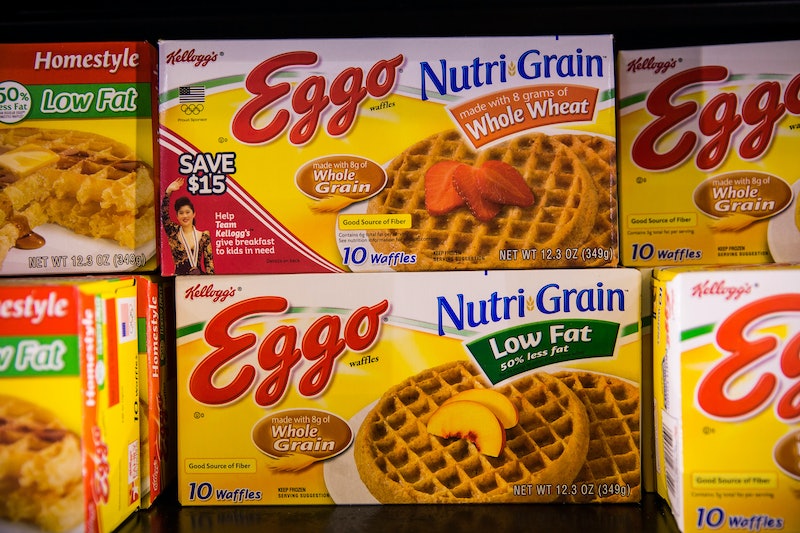 For all of you who love to start the day right (which is with waffles) there may be a slight change in your morning routine. Kellogg's voluntarily recalled 10,000 cases of its Eggo waffles in 25 states, the company announced on Sept. 19. The recall was due to reports of potential listeria contamination in the product. But this wasn't the first time the company had been in the news for its waffles recall.

While Kellogg has said that it so far has not received any complaints of illness, they're right to be cautious. Listeria can cause some serious health issues especially in children, pregnant women, and the elderly. The range of symptoms include severe headache, high fever and diarrhea, and for pregnant women, there is increased risk of miscarriages and stillbirths.

The company is currently offering refunds, but customers who have bought 10-count boxes of Kellogg's Eggo Nutri-Grain Whole Wheat Waffles with a UPC code of 3800 40370 and a Nov. 21, 2017 expiration date should discard the items immediately.

In 2009 and in 2010, the U.S. Food and Drug Administration found traces of listeria at an Atlanta location where Eggo Buttermilk Waffles were made; they sent Kellogg a letter that faulted its safety standards and precautions.

But this recall might seem pretty tame in comparison to Kellogg's 2012 recall of 2.8 million boxes of its popular Bite Sized Frosted and Unfrosted Mini-Wheats because of a glitch that left forms of metal mesh in the cereal. And it's definitely tame compared to its notorious 2010 recall of 28 million boxes of Froot Loops, Honey Smacks, and anything else manufactured at its Omaha plant because of a pretty bad smelling odor. Later, the company figured out it was due to the plastic lining within the boxes. Overall, that's a lot of recalled cereal.

Any recall of your favorite food can be pretty annoying, but also slightly alarming since it really makes you wonder what actually goes on behind the scenes at these plants. Furthermore, it makes me question the health and safety standards of the product, no matter how yummy it is. Maybe the next best thing is just making waffles from scratch.