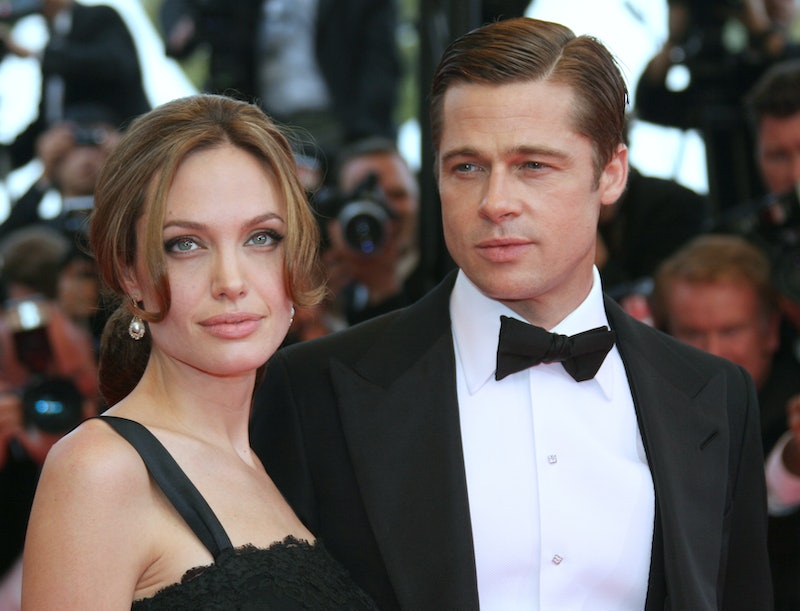 Never in a million years did I ever think this day would come, but it looks like it has. According to TMZ, Angelina Jolie has filed for divorce from Brad Pitt after two years of marriage and more than a decade together. Allegedly, Jolie filed the paperwork on Monday citing irreconcilable differences. Bustle has reached out to Jolie's lawyer, Laura Wasser — as well as Jolie and Pitt's reps — but has not yet heard back. Update: Jolie's lawyer has confirmed that she did in fact file for divorce from Pitt in a statement to Reuters: "This decision was made for the health of the family. She will not be commenting, and asks that the family be given its privacy at this time," said Robert Offer, according to the newswire.

Earlier: The news is fresh so not many details have surfaced about their reported split, just the basics. Allegedly, Jolie is not asking for any spousal support from Pitt but instead wants physical custody of all six of the children she shares with him, offering Pitt visitation and to retain his legal custody. This news is completely unexpected, since the couple just celebrated their second wedding anniversary. Hollywood relationships don't always last, but it's heartbreaking to see that a couple that seemed to have so much staying power could be over forever. Jolie and Pitt may not have confirmed a divorce themselves, but Wasser has, via United Nations correspondent Michelle Nichols' Twitter account, so it's safe to say that the worst has happened. Get out your tissues, everyone.

I have a feeling this is just the beginning of a lot of sad news involving one of the most beautiful couples ever to walk the Earth, so maybe we should all brace ourselves. If Jolie and Pitt couldn't make it work, who can?