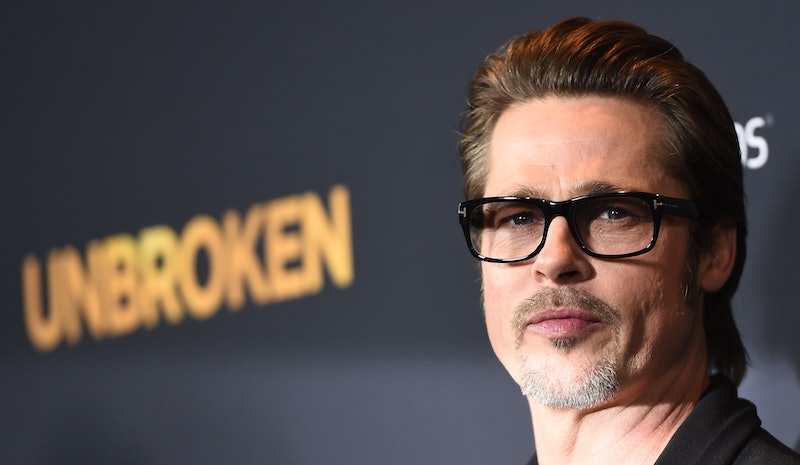 In some very, very shocking news to the entertainment world, TMZ reported Tuesday that Angelina Jolie has filed for divorce from Brad Pitt, her husband of two years and partner of over a decade. Excuse me while I pick my jaw off from the floor. How could Brangelina break up?! TMZ sources claim that Jolie filed documents on Monday, Sept. 19, citing irreconcilable differences, and claims that she is asking for physical custody of their six children, while only allowing Pitt visitation. Amidst the many rumors spiraling, one of the more wild one out there relates Gwyneth Paltrow to Brad Pitt and Angelina Jolie's divorce. Yes, those rumors are out there.

Bustle has reached out to Jolie's lawyer and reps for both Jolie and Pitt regarding the divorce report, but has not yet received a response. Update: Jolie's lawyer has confirmed that she did in fact file for divorce from Pitt in a statement to Reuters: "This decision was made for the health of the family. She will not be commenting, and asks that the family be given its privacy at this time," said Robert Offer, according to the newswire.

Earlier: There are many questions left to be answered in this news, but according to the Associated Press, Jolie's lawyer has confirmed the divorce filing, meaning that true love really is just a farce. With a Hollywood breakup of this magnitude, fans are curious as to why Brangelina could be divorcing, and Paltrow is at the center of some of the weirdest rumors on why Pitt and Jolie are divorcing.

Odd, I know, but the internet sure loves it's bizarre celebrity couple rumors. To refresh the memory of some '90s babies out there, Paltrow and Pitt were one of Hollywood's golden couples in the mid '90s after the co-starred in the thriller Seven. The exes haven't been spotted together in recent years, but Paltrow opened up about her relationship with Pitt in Vanity Fair in 2015. She said of why they broke up in 1997, “I was 22 when we met... I wasn't ready, and he was too good for me... I didn't know what I was doing.”

Beyond that, there wasn't any talk of these two in the same sentence, but a few outlets began reporting of a Brangelina divorce and Gwyneth Paltrow connection as early as Sept. 3. Granted, couples as famous as Jolie and Pitt deal with many rumors throughout their relationship.

On Sept. 16, Gossip Cop reported that the National Enquirer claimed Jolie was furious with Pitt when he said Paltrow's name in his sleep, and this story spread around the web. Silly, I know. This story was debunked by Gossip Cop (probably because how could anyone other than Jolie and Pitt know what they said in their sleep?), but just a mere four days later, the Brangelina divorce news was reported. According to TMZ, their listed date of separation was Sept. 15, so waves of this huge Hollywood announcement were already possibly churning... or just a wild coincidence.

In the wake of the divorce of Pitt and Jolie, it's important to be mindful of rumors and wait until the facts. We might not ever know the real reason for their split, but I venture to say that Pitt saying Paltrow's name in his sleep was not it.