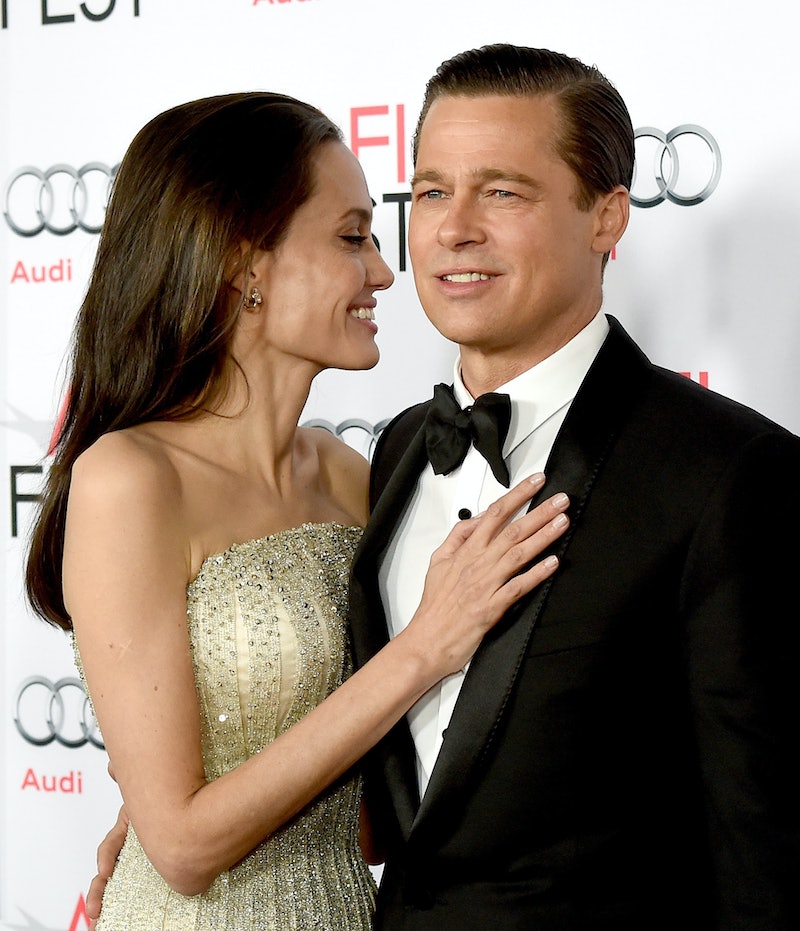 In news that is bound to shock just about everyone, Angelina Jolie has reportedly filed for divorce from Brad Pitt, a rumor that has been reportedly confirmed by CNN. The pair have famously been together since 2004, following their collaboration on the movie Mr. & Mrs. Smith. Jolie and Pitt have six children together, and got married in Aug. 2014 in France. Bustle has reached out to Jolie's lawyer and reps for both Jolie and Pitt regarding the divorce report, but has not yet received a response. If the actors are set to divorce, with six children, things become very complicated. Do Angelina Jolie and Brad Pitt have a prenup?

There are no legitimate sources that answer this question, although several rumors state that Pitt and Jolie did sign a prenuptial agreement prior to getting married. An alleged source reportedly told the tabloid Star in Sept. 2014 that the couple's prenup was very specific, including a clause regarding any possible infidelity. The source claimed, "If Brad gets too serious with another woman while they are married, she’ll get primary custody if they split." According to TMZ, "there was no alleged 'third person'... her decision to file was solely over Brad's interaction with their children," so already custody is playing a central role in divorce proceedings.

According to Star's source, the famous couple allegedly agreed that "having a prenup is the best way to protect their kids,"and their family is likely to be their primary concern throughout the divorce process. At the time of their marriage in 2014, Star reported that Jolie and Pitt had a "total net worth of $425 million," and Closer reported that "according to their agreement, should they part ways, each will leave with the millions they brought into the union on their own." While these reports are purely speculation rather than concrete fact, it seems likely that both Pitt and Jolie will leave the marriage with their own funds, as they're both independently wealthy.

TMZ appear to confirm the idea that the prenup allows the actors to retain their own money, as the publication is reporting that Jolie "is not asking for spousal support." The fact that there isn't a request for spousal support being made, but Jolie is "asking the judge to give Pitt visitation" while she retains sole custody, seems to add weight to the idea that there is already a prenup in place. It seems fairly significant that Jolie wants physical custody of their six children, instead of joint custody with Pitt, and it's possible that a prior agreement made by the couple allows this arrangement to happen.

There's no confirmation yet on whether these reports are true, but we're likely to find out in the coming weeks whether or not Jolie and Pitt have a prenup in place. Regardless, divorce is a complicated process, and with six children together, the actors are sure to want to protect their family.

More like this
Thank U, Ex
By Rosemary Donahue
Kaley Cuoco & Tom Pelphrey Just Made Their First Public Appearance As A Couple
By Hugh McIntyre
16 Celebrity Couples You Forgot Dated Including Helen Mirren & Liam Neeson
By Sam Ramsden and Lisa Fogarty
Marcus Rashford Took Inspo From Kravis For His Adorable Proposal To Girlfriend Lucia Loi
By Frances Stewart
Get Even More From Bustle — Sign Up For The Newsletter