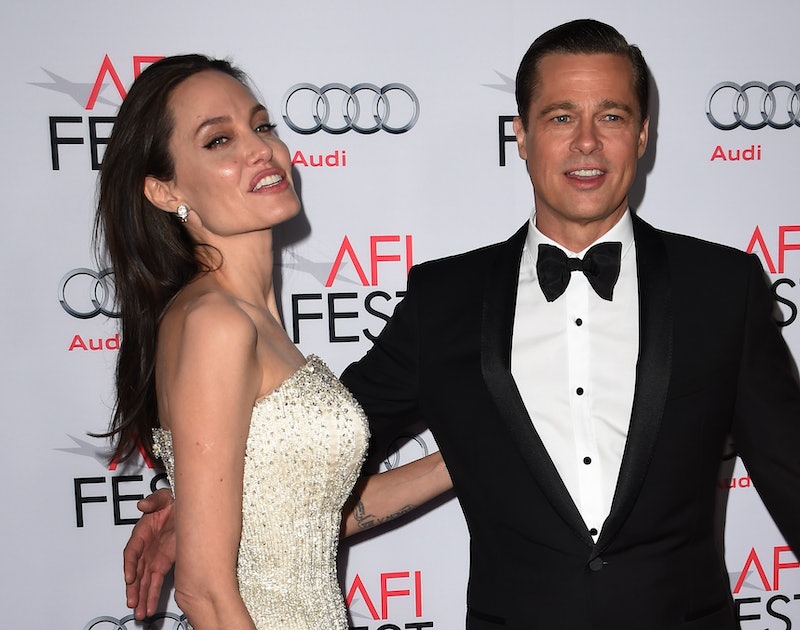 The lion's share of the Twitterverse is in mourning over the dissolution of Angelina Jolie and Brad Pitt's marriage. One can almost hear the global weeping over tear-stained copies of Us Weekly featuring the glamorous power couple strolling the red carpet in better days. "But what will happen to Vivienne and Knox?" is the question on everyone's lips. Some even dare to lament, "Why couldn't this have happened to Kimye instead?" Amidst the wailing, I may be one of the few who is shrugging her shoulders at the Jolie-Pitt split.

It's not that I am heartless creature who is above the world of celebrity romances. Let me be clear: The wailing could be heard for several city blocks when I discovered Jon Hamm and Jennifer Westfeldt had split up last summer. It's hard to articulate why I loved that couple oh so much. Maybe it was that I loved Westfeldt's writing and directing — and with it, admired that Hamm seemed to adore her for her brains and her beauty. Or maybe it was that the couple had met and fallen in love when both were fairly under the radar, making them more "genuine" than a celebrity couple? Perhaps it was how they artfully and honestly tackled questions about choosing not to have children in a way that was refreshing and also made them beautiful role models for those who don't want kids themselves. Maybe it was a compendium of these factors. All I know is that when their split became public, I was just short of ripping my clothes and falling into the fetal position on the floor.

My lack of Jolie-Pitt emotions also stands in stark contrast to the sadness I felt when Amy Poehler and Will Arnett split in 2012. I remember hearing the news while waiting on line for a comedy show at the Upright Citizens Brigade (which Poehler co-founded) and hearing someone wail, "If they can't work, then there's no hope for the rest of us." While Poehler and Arnett were still a celebrity couple, and thus far funnier and better-dressed than most non-celeb couples, they were relatable because they seemed like really good friends in addition to being spouses. Pitt and Jolie had cinematic sexiness and heat, but that also seemed unattainable, and thus not even desirable — at least, not for me. Poehler and Arnett seemed to embody the simple, noble goal of marrying your best friend — and thus, it hurt all the more when they broke up.

News of the Jolie-Pitt marriage, however, elucidates none of these strong expressions of grief.

No, I'm not dancing on the grave of their marriage, as some appear to be — not even in a sort-of-well-meaning Team Jennifer Aniston way.

I just never felt a strong attachment to Brangelina. Sure, if we're being honest, the fact that they started as an extramarital affair (Pitt maintained he didn't cheat on Aniston with Jolie before they separated) didn't endear me to them. However, I think the larger reason I feel meh at best about their split is that they are wildly hard to feel sorry for and wholly unrelatable. And that's not because they have raised an implausibly perfect brood — though their stunning familial photo spread when they got married doesn't help.

Not only are Pitt and Jolie two of the prettiest people on the planet, but they are also two people who have managed to have successful careers outside of merely being celebrities. That goes doubly for Jolie (maybe triply, or some other factor). I mean, she is a freakin' special envoy for the United Nations High Commissioner for Refugees, and a lecturer at the London School of Economics. She pens op-eds for The New York Times. To say these are highly admirable achievements is obvious. But they also feed into how she is so perfect that, well, she is hard to empathize with or feel too brokenhearted for. Millions of Americans divorce without having such laurels to rest on when they need a pick-me-up.

Together, Pitt and Jolie were almost too perfect, too poised, too sexy. They were dazzling to watch, but they felt more like a movie, even when they were in real-life situations.

Besides, the rest of the world is weeping for Jolie and Pitt. They don't need my tears.