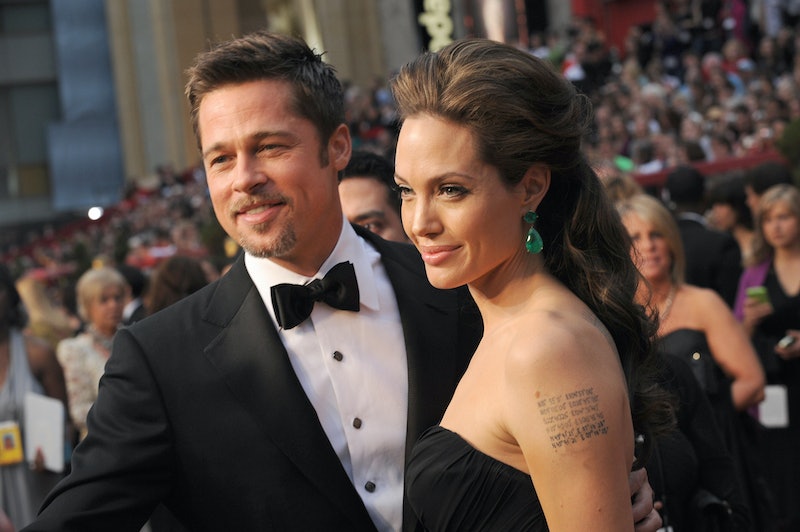 After two years of marriage and many more years as a couple, Brad Pitt and Angelina Jolie will be getting a divorce, Jolie's lawyer confirmed to Reuters in a statement. According to the Associated Press, Jolie cited “irreconcilable differences” as the reason behind the divorce. But, in the midst of their split, will Brad Pitt and Angelina Jolie change the tattoos they got together? Let’s break it down.

Only time will tell if the two will remove or alter their ink, but honestly, signs point to them leaving it in tact, if you ask me. Jolie is no stranger to body modification. According to Vanity Fair, the actress is thought to have around 20 tattoos, which is quite the collection! Pitt on the other hand, does not have nearly as many tattoos, but according to Woman’s Day, the ink they received together has a special meaning.

According to the publication, the two were tattooed by the Thai tattoo artist Ajarn Noo Kanpai. He reportedly used the same ink for each of their designs. Kanpai told the publication his work has deep spiritual meaning. In that case, it seems unlikely that a divorce would cause either Pitt or Jolie to alter the art. Their marriage is part of their story, in life and in ink, and really, no alteration can change that.

The tattoos Pitt and Jolie received together "are composed of grids with pyramids at the top… they help to give the wearer protection and health,” a source told Woman's Day. Although, this wouldn't be the first time Jolie has removed a tattoo from a previous marriage. According to People magazine, she had a tattoo of Billy Bob Thorton's name removed after their divorce in 2003.

Pitt has the words "We live, we die, we know not why, but I’ll be with you" on his chest. According to Woman's Day, the tattoo is believed to be a traced version of Jolie's handwriting.

This more recent tattoo fits in with the rest of her ink much better than the "Billy Bob" one did, though. So, it definitely fits the theme she's going for, which is why it makes sense for her to keep it.

It's too soon to tell what will become of the tats, but it'd be a shame to lose such beautiful body art, you know?

More like this
The $6 Drugstore Beauty Product Taraji P. Henson Uses Every Single Day
By Danielle Sinay
Sarah Jessica Parker Will Change Your Outlook On Aging
By Rachel Lapidos
Regé-Jean Page On The Art Of Power Napping
By Paris Giles
12 July 4th Beauty Sales To Jump On ASAP
By Jordan Murray
Get Even More From Bustle — Sign Up For The Newsletter