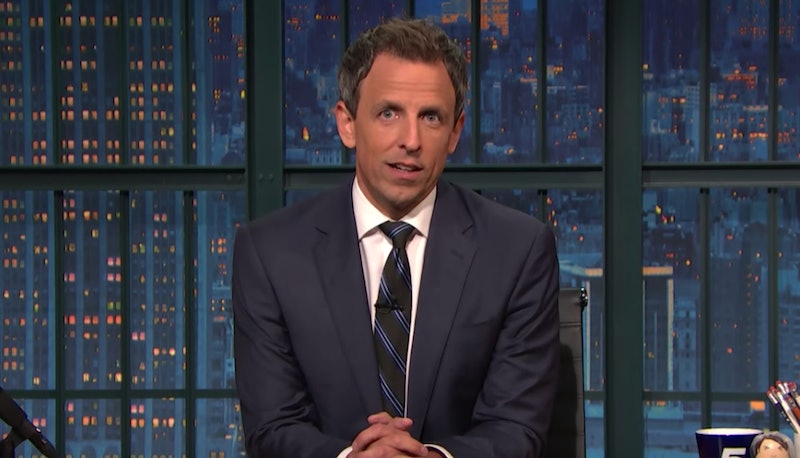 Last week, Republican presidential nominee Donald J. Trump held what was essentially a press conference for the opening of his new hotel. If you were watching the news, you almost certainly saw some of it. Trump made a testy, unapologetic announcement giving up on his birther argument — you know, how he's spent the past five years questioning President Obama's place of birth. And this week, at least one late-night host let him have it. Seth Meyers called out Trump's birther lies, and in doing so, gave his late-night colleague Jimmy Fallon a lesson in how to handle the mendacious, vitriolic GOP nominee.

If you didn't catch Trump's announcement, well, you didn't miss much. He tersely admitted that Obama was born in the United States, offered no apology for suggesting otherwise for so long, claimed the whole thing was Hillary Clinton's fault, and spent a copious amount of time plugging his new Washington, D.C. hotel. Simply put, it was vintage Trump.

To Meyers, who hasn't been shy about excoriating Trump's egregious behavior throughout this campaign, this incredibly disingenuous statement was like a ball sitting on a tee in the sweltering summer heat, just waiting to be smashed. And he didn't miss. Just days after Fallon drew widespread criticism for his playful, substance-free handling of Trump, Meyers dressed Trump down in the most thorough fashion possible, with facts and laughs.

The full segment is nearly 10 minutes long, but if you've got the time, it's worth every second. Going step by step, Meyers completely demolished Trump's flimsy attempt to brush off his years of racist conspiracy theorizing, as well as the laughably false claim (advanced by leading surrogate Chris Christie, among others) that Trump abandoned the issue in 2012, after President Obama released his birth certificate.

This is easily disproved, both by Trump's public statements in the years since ― he questioned the validity of Obama's birth certificate as recently as the 2015 Conservative Political Action Conference (CPAC) ― and by his multiple tweets advancing even more such conspiracy theories. In 2013, he tweeted about the death of former Hawaii Department of Health director Loretta Fuddy, insinuating she'd been killed in a plane crash as part of a cover-up. The worst part? He hasn't even deleted it.

Let's just step back here and think about how insane that is. Trump thinks the president orchestrated a plane crash so accurate that it only killed the one person who could prove his birth certificate was a fraud. Yeah, just bang the plane against a mountain, but then land it safely. 12E, we want to take out 12E.

In short, while Meyers didn't actually have Trump there in the hot seat, he delivered the kind of incisive takedown that plenty of viewers (admittedly the liberal ones, in all likelihood) wanted to see Fallon execute days earlier. In fact, Meyers went even further than anyone probably would've asked Fallon to ― even a single question that was at all hard, controversial, or substantive probably would've been enough, rather than all exaggerated belly laughs and hair-mussing.

If you're looking for a superior mix of news, current events, politics, and guffaws, maybe you should start tuning in to NBC an hour later ― Meyers' Late Night follows Fallon's Late Show at 12:30 a.m. ET.