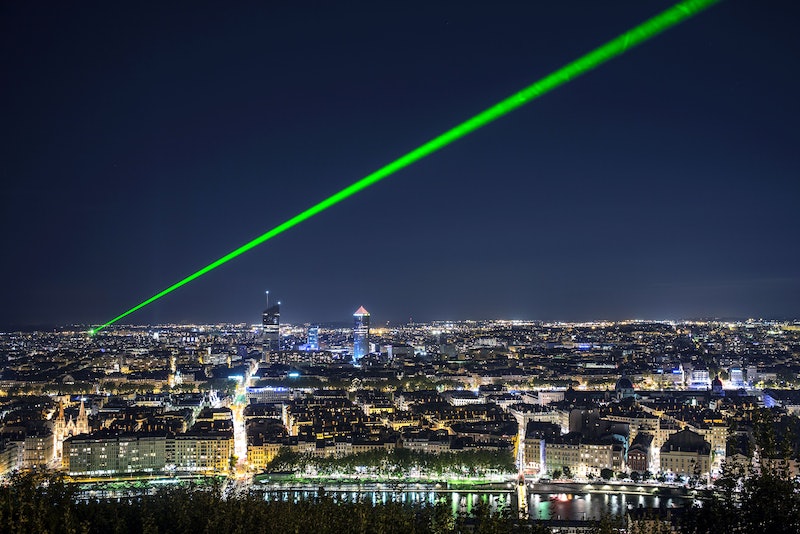 Whenever I get asked what superpower I would have, I almost always say teleportation. Imagine it — never getting stuck in traffic again, never having to go through airport security, never having to pay $3 for a subway swipe. When I read that scientists had made a major teleportation discovery, I got wildly excited, until I realized that's not exactly what they meant. However, there's still plenty of reason to be pumped about the new scientific advancement. Two different teams of researchers in Canada and China teleported particles called photons using fiber optic cables and showed that two photons miles apart from each other could send information without a physical connection. This opens up the possibility of quantum Internet, a faster and safer way to go online that should aid research and help scientists achieve human teleportation one day.

The science behind the new achievement is called "entanglement," which connects particles that aren't physically connected. The scientists in the Canadian experiment connected two photons (the particles that make up light) and showed that they maintained their connection even after being teleported 3.9 miles away. The Chinese researchers demonstrated an even further distance, 7.8 miles. Since these are just early tests, it's a sign that the quantum technology could connect networks literally halfway around the world.

The photons should be able to code information by their change in state, just like the 1s and 0s that make up the digital binary. It seems like gibberish if you can't read binary, but when that information is interpreted by your computer, you see pictures and videos on your screen. The exact same goes for quantum teleportation, and though there's obviously still a long way to go before the technology is integrated into your laptop, the fact that the researchers used preexisting telecommunications hardware to achieve the teleportation is a hugely encouraging sign. The progress in technology will be much more easily achieved because scientists and engineers don't have invent the relay hardware first, so you could have access to quantum Internet sooner than you might think.

Like I said before, this isn't the type of teleportation from the Star Trek movies, but it's a step in the right direction. The technology can't ever be used on people, but by increasing the Internet's current speed, capabilities, and access points, researchers will be able to reach new discoveries even faster, and possibly finally make human teleportation a reality. It also has a huge impact on security — quantum Internet would be a lot safer, because there's no stop point in the communication process where hackers could access the data.

All in all, quantum internet looks like an awesome new technology that will allow people to communicate safer and more easily. Plus, there's no telling where this research could expand — maybe it will lead to heads up displays or instantaneous communication without the use of a cell phone. Although it's not quite the incredible tech that The Jetsons and Back to the Future promised, it's science fact that's still pretty amazing.

More like this
35 Sexy Texts To Send Your Partner
By Griffin Wynne and Carolyn Steber
15 Years Of The iPhone, In Pictures
By Emma Carey
How To Decide Between Using White, Pink, & Brown Noise
By Carolyn Steber
Using Your Pet’s Name As A Password? Here’s Why You Might Want To Change It
By Cristina Sanza
Get Even More From Bustle — Sign Up For The Newsletter