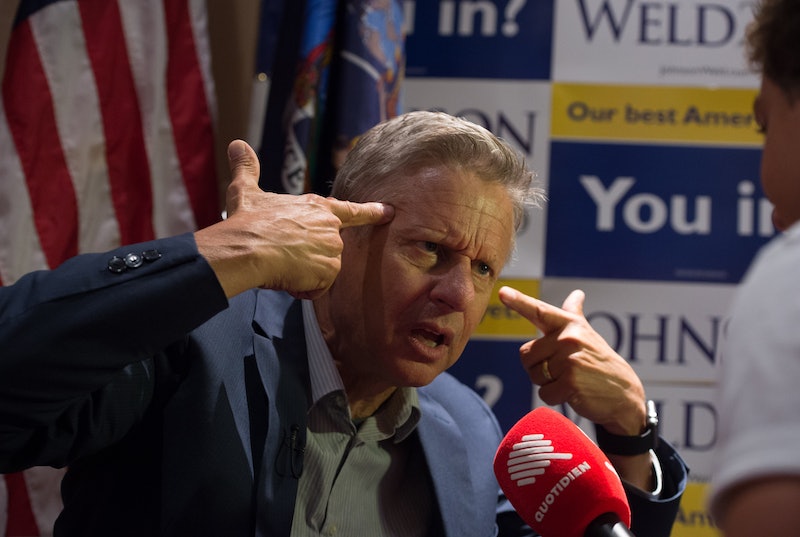 While Donald Trump and Hillary Clinton are gearing up for next Monday’s presidential debate, their third-party counterparts are plotting their next moves and trying to figuring out how to stay relevant. Without making the debates, Gary Johnson and Jill Stein have a tough road ahead for winning the hearts and minds of (or even being recognized by) American voters. While Johnson once was hopeful of making the first debate, he couldn't meet the threshold required by the Commission on Presidential Debates, and it may be a lethal blow.

Last week, the Commission announced that Johnson and Stein did not meet all of the requirements to participate in next Monday’s presidential debate, the first of three such debates that will air ahead of November’s election. Though the two are constitutionally eligible and appear on the ballots in enough states, neither candidates polled at 15 percent of support in the five polls used by the Commission, which made them ineligible for a spot on the stage at Hofstra University. After the news broke, Johnson called the debates "a rigged game."

But, in thinking of next steps for the Libertarian presidential candidate, Johnson’s only one may be out the door of this race. Participating in the debates is pretty crucial for a victorious campaign. This is the time when you can show off your presidential chops for the American people. Tout your credentials. Lay out your policy plans. Or, if you’re Trump, show everyone you have normal-sized hands.

Johnson's Libertarian platform actually seems like it may be appealing to some voters, especially in this race, since many claim they are disenchanted with Clinton and Trump. He is relatively socially liberal and fiscally conservative. He supports same-sex marriage, abortion rights, the Black Lives Matter movement, free trade, and open immigration, while wanting to do away with income tax in favor of a national sales tax and drastically cutting government spending. Though his desire to do away with almost every government agency would likely be troubling to many Americans.

But few know this, because he doesn’t get the airtime or the exposure that his competitors do. Without the opportunity to prove himself on a national stage at the first debate, as the clock to Election Day winds down, his opportunities to draw new voters dwindle, and his prospects of winning go from extremely unlikely to totally, impossibly, extremely, highly unlikely.

Also, when he does get airtime, Johnson has unfortunately flubbed it on some key occasions. Probably the most publicity Johnson’s campaign has gotten has been from a high-profile gaffe. He asked Morning Joe co-host Mike Barnicle, “And what is Aleppo?” in a discussion about the Syrian refugee crisis. And earlier this week, he said he was glad that “nobody was hurt" after the bombings in New York and New Jersey this past weekend (in fact, many were injured).

Johnson is at least forthcoming about these gaffes, a characteristic not often seen in politicians. But unfortunately for him, people tend to consume political media in soundbites, and the frank apologies don't make as many headlines.

So Gary, this may be the time to step aside. Go back to New Mexico. Ride your beloved bike. Plan your next Everest trip.