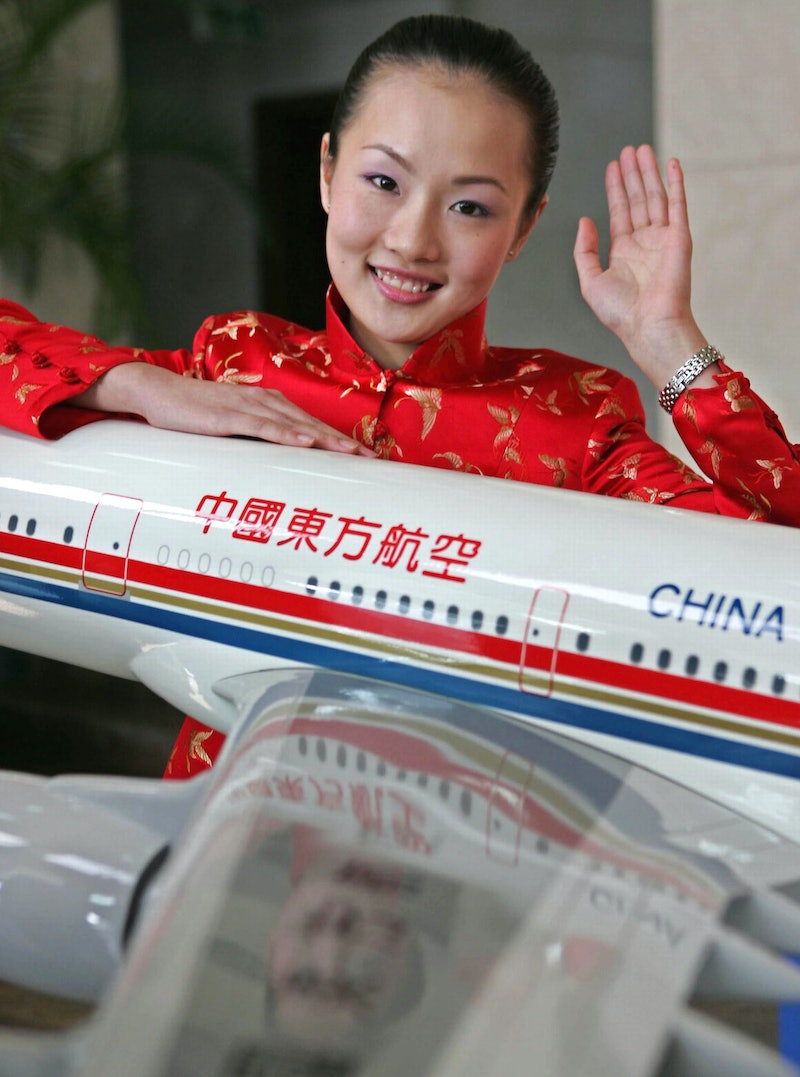 Hey, Chinese women over 35: you might not have to give up on your dreams of becoming a flight attendant.

In response to a survey showing that 72 percent of fliers prefer to be served by experienced flight attendants rather than trolly dollies, China’s biggest budget airline, Spring Air, has decided to raise the age limit on new recruits from 35 to 45.

Hiring criteria for the new “flight aunties” include having a college education— and a husband and children. (Is this progress? You pick your battles, I guess.)

Being a flight attendant in Asia is a prestigious career. They're not just beverage-pourers and seatbelt-checkers, but often models and even mid-air car salespeople.

Former Asiana Airlines flight attendant Jean Carmela Lim reminisced last week about being told to wear a short skirt without tights to her job interview and attending seminars on hair and makeup as part of her training. According to Lim, “the cabin manager inspected the attendants to make sure they were wearing the right color of nail polish and had their aprons properly ironed.”

When I boarded an Asiana plane to Korea last year, I felt like I’d stepped onto the set of an Asian Pan Am. The flight attendants were without exception young, slim and female, their fingernails immaculately painted in pastel shades, hair slicked back in tight buns at the same point on the nape of the neck. Their uniforms consisted of pencil skirts, scarves and the sort of pillbox hat you’d be more likely to find on a Halloween “sexy flight attendant” costume than a flight attendant for Delta or American Airlines.

In the last few years, Asiana has come under attack for rules like bans on pants and glasses for female cabin staff. South Korea’s other major airline, Korean Air, authorized trousers in response to similar criticism in 2005.

But not all customers mind. Asiana has been honored with awards like “Best Flight Attendants in the World” from Business Traveler and “Best Onboard Service and Flight Attendants” from Global Traveler.

When I fly, my outfit tends to be less about style and more about how much I can reasonably fit on my body to save space in my suitcase. I don’t particularly want to be made to feel under-dressed by ridiculously primped up flight attendants.

More like this
5 Ways To Help People Impacted By Hurricane Ian In Cuba & Florida
By Emma Carey
Chelsea Clinton On The Best Advice She Ever Got From Her Mom
By Brianna Kovan
You Can Stay At The 'Hocus Pocus' House On Airbnb
By Alexis Morillo
Craving The Beach? Here's Your Guide To A Solo Vacation In Turks & Caicos
By Alexis Morillo
Get Even More From Bustle — Sign Up For The Newsletter