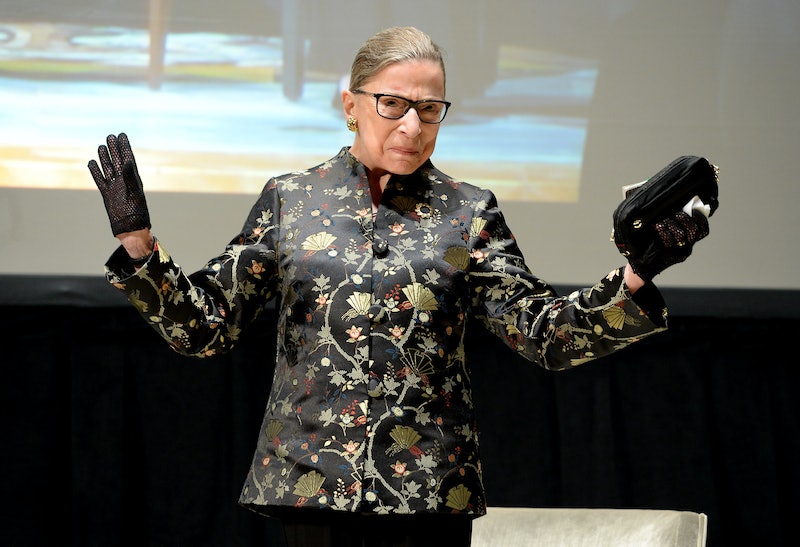 You know her name, and you probably know the basics: Justice Ruth Bader Ginsburg became the first Jewish female U.S. Supreme Court justice, and only the second woman appointed ever, in 1993. She is known as a champion of abortion and gay rights, the poor, and basically, all marginalized people the law tends to try to screw over. She's known these days by many as The Notorious RBG, and with her decades of historic opinions, she is truly a living legend.

So I was thrilled when the Temple Emanu-El Skirball Center in New York City invited me to come see Justice Ginsburg in conversation with ABC's Dan Abrams Wednesday night. The Notorious RBG didn't disappoint — in fact, she moved my neighbors to tears for the entire hour. Coming out on stage in heeled boots and gloves, Ginsburg is indeed a tiny powerhouse of deliberately-phrased truth-bombs.

She spoke for the hour on a wide variety of topics, staying away from political specifics (she did recently get into some trouble for so clearly voicing her opinion on Donald Trump), but she managed to get in some jabs at Congress, as well as more than a few hilariously fun facts about herself. Here are 16 fun facts I learned about Justice Ginsburg watching her speak. You can read even more juicy details and insight when her new memoir, My Own Words , drops on Oct. 4.

1. She was one of only nine women in a class of 500 at Harvard Law — and was also taking care of her 14-month-old baby at the time.

She was asked by the men there why she was "taking up a man's spot," and she felt she had to be flawless on behalf of all women. She'd go to school, come home, take care of her her daughter and put her to sleep, and then go back to studying.

2. She never has days when she dreads going to work.

She has her dream job. "Sometimes I think, did I dream it? Is it really me?" she said.

Though Justice O'Connor tried to get her to workout with her at her aerobics class at 8 a.m., Ginsburg says, "I am a night person. Getting to work by 9:30 every morning was enough."

Opera was a shared passion of the two Supreme Court justices. "My feminist friends asked why his name came first, even though mine was first alphabetically and I'm older. But since he was appointed first, he's actually more senior," Ginsburg said.

7. ... And she still misses "the challenges and the laughter" he brought.

She says they mostly used to talk about opera and their families.

8. Before RBG was added to the Supreme Court, there was only one bathroom on site — for men.

Once she was appointed, however, they got a woman's bathroom. Said RBG, "Justice O'Connor no longer had to go back to her chambers when the need arose."

9. When RBG was battling cancer, Justice Sandra Day O'Connor encouraged her to "do chemo on Friday" so she could come back to work on Monday.

She told her, "you'll get over it on the weekend."

OK, so this isn't a fact about her, but it was some juicy SCOTUS gossip.

11. Not surprisingly, she thinks Congress is currently dysfunctional.

"I hope that one day, our Congress will begin to function again the way it should," she said. "I hope I will live to see that day."

12. She's proud of her Jewish heritage, but has issues with gender-segregating Orthodox traditions.

"When I was growing up as a girl I was jealous that there were no Bat Mitzvahs for us at the time. The hardest thing for me was when my mother died and in order for there to be a Minyan we needed to have 10 men — even though there were many women [mourning]," Ginsburg said. "Recently, I went to a Bar Mitzvah at an Orthodox synagogue that seats women in a different section. It was very claustrophobic. I felt very hemmed in."

13. Her favorite amendment is the 14th Amendment.

The 14th Amendment to the Constitution was ratified in 1868, and granted citizenship to “all persons born or naturalized in the United States,” including former slaves recently freed. It also forbids states from denying any person "life, liberty or property, without due process of law" or to "deny to any person within its jurisdiction the equal protection of the laws.”

14. ... And her favorite justice is Justice Marshall Francis.

He led the Marbury vs. Madison case, which confirms the legal principle of judicial review — aka the ability of the Supreme Court to limit Congressional power by declaring legislation unconstitutional. "There's something nice about being able to dissent," Ginsburg said.

15. She does not support a constitutional amendment to reverse Citizen's United.

She thinks it was a "huge mistake," but fears what other decisions politicians in the country might want to amend if we open up those floodgates (like if they were to try to amend Roe v. Wade).

"At my age, you have to take it year by year. I know this year, I feel OK," she said. (Thunderous applause ensued.)