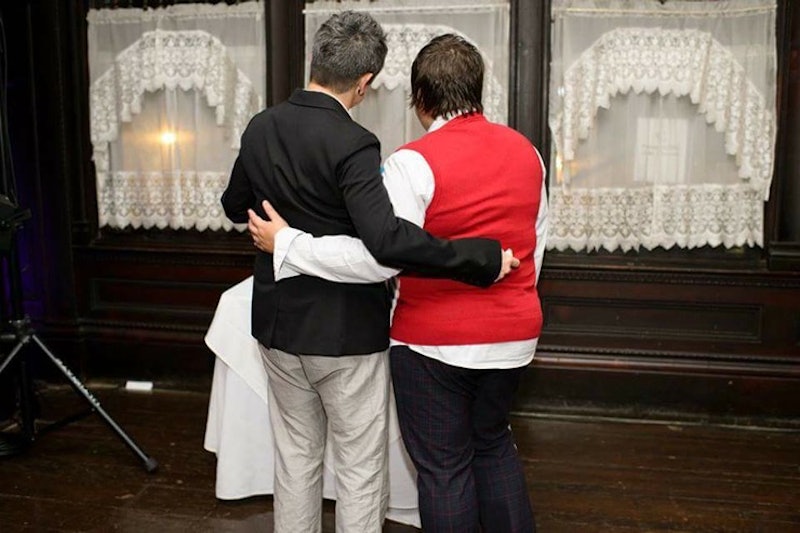 I was folding laundry the other night when I noticed something that didn’t belong. I picked up a tiny white-and-gray striped sock from the pile of clothes and held it in the air. At first, I thought I'd done it again — screwed up the simple task of doing laundry and shrunk my wife’s clothes. I could add that to the list of her shirt that I shrunk, the pants that I accidentally dyed pink, and the blouse that I permanently stained when I hung it over an old wooden chair to dry. Then, I realized it wasn’t my fault — it was an errant baby sock that had accidentally found its way into our laundry basket. It belonged to a neighbor who now had a little person with one bare foot.

The baby sock entered by life on the eve of finding out whether I was pregnant. It was my fifth cycle trying to conceive. The moment followed two restless nights filled with mystic dreams of my dead grandfather introducing me to a little boy.

The one, thick red line telling me I had failed yet again cut through me like an old machete on a spry limb. Despite the weeks of telling myself it would OK, I fell apart and cried like the baby I knew I might never have.

Five months of actively trying to get pregnant, of painfully-early-morning-running to the doctor before work to measure the eggs in my ovaries before I had even finished a cup of coffee; five months of injecting hormones into my stomach day after day with a host of wholly unpleasant side effects that ran the gamut from nausea and bloating; five months of insemination producing cramps so bad I had no choice but to lie in fetal position (ironically) for hours at a time.

But nothing was worse than the two-week wait in between insemination day (done at the doctor’s office with an instrument that essentially amounted to an elongated turkey baster), and beta test day, when a blood test would determine whether or not I had a tiny grain of sand that could turn into a baby. Every twinge, every craving, every dream made me wonder whether it might be a sign that I either was or wasn’t pregnant. So far, each try had ended with a call from the nurse at the fertility clinic, her voice deliberately downtrodden and sympathetic, followed by a pity party with my wife.

This time, I decided not to wait until the blood test and to take matters into my own hands. I rushed to bathroom and unwrapped my dollar store pregnancy test (for some reason, I thought the kitsch of a cheap test might bring me luck), dropped three specs of the urea-filled liquid into the tester, and waited the excruciating three minutes to pass. As I paced, I thought about how this time might finally be it. After years of debating whether to try at all, months of doctors’ visits, medications that made me sick, and failed attempt after failed attempt, maybe this would be the moment of truth. I would see two red lines on that damn pee stick and I would want to shriek with joy but would contain myself and approach my wife, slowly and quietly holding the positive test in hand, until her eyes lit up and she grabbed me and spun me around and we skipped into the sunset, happily ever after.

I stepped into the bathroom and slowly looked at the pregnancy stick. The one, thick red line telling me I had failed yet again cut through me like an old machete on a spry limb. Despite the weeks of telling myself it would OK, I fell apart and cried like the baby I knew I might never have.

I felt like I'd failed my wife, who so desperately wants a baby but can no longer conceive; failed my mom, who has watched all of her friends become grandparents, her arms still baby-barren. I even felt like I had failed myself, like my body had betrayed me. Worse yet, I was completely in the dark about whether our efforts would ever come to fruition, and whether I would ever be OK if it didn’t.

Five failures are a lot to take. But those five short months signify years of trying to undo the notion I was taught — that a lesbian doesn’t get married or have children. Now that I can, I desperately want to prove it wrong, once and for all.

I can mix a mean margarita, make just about anyone laugh, and string words together to form a decent sentence. I’ve never been amazing at anything in particular, but I’ve always worked really hard and generally eked in slightly above average. I’ve had tastes of failure along the way — the championship softball game I lost, the teenage crush who rejected me in front of a group of friends (devastation!), the boss who let me go claiming it wasn’t “personal,” it was “personnel.”

Those moments stung like a hot iron to the heart, but even at a young age, I was able to see through that pain and know that I would be all right. I knew that somehow the rejection would teach me something, and that it would lead to future success. As I got older, especially as a writer, I learned to brush rejection off like a fly buzzing near my face. It was annoying, but not debilitating. One man’s "no" was another’s "yes." I knew if I kept at it, I would start to get better. And sure enough, it worked. I learned how to play the game of love, of career success, of life. I still get rejected left and right, but there are more and more yeses and I get better at weathering the nos.

But when it comes to trying to get pregnant, I have absolutely no handle on my emotions. I can blame it on the hormones, but no matter how I try to game the system and set expectations, I still feel like a complete and utter failure each time I learn that I’m not pregnant. I’ve never felt so down, with no clear vision of whether I’ll see the light on the other side of the tunnel.

Five failures are a lot to take. But those five short months signify years of trying to undo the notion I was taught — that a lesbian doesn’t get married or have children. Now that I can, I desperately want to prove it wrong, once and for all.

I recognize that some people try for much longer than we have been trying. I recognize that others have incredible obstacles, whether physical ailments or otherwise, that make the prospect of getting pregnant that much more dubious and draining. I recognize that there is immense human suffering unfolding in every corner of the earth and that I live a pretty damn good life.

But I still can’t shake the deep-seated depression that comes with what feels like the ultimate failure. If the biggest investment of my life doesn’t pan out, I honestly don’t know if I’ll ever be OK.

More like this
The 19 Best Tweets & Memes About Bisexual Awareness Week
By Lexi Inks
Are Quality Time & Gift-Receiving Love Languages Compatible?
By Lexi Inks
The Differences Between Polyamory & Open Relationships
By Lexi Inks
Why Acts Of Service & Gift Love Languages Are A Dream Pairing
By Lexi Inks
Get Even More From Bustle — Sign Up For The Newsletter