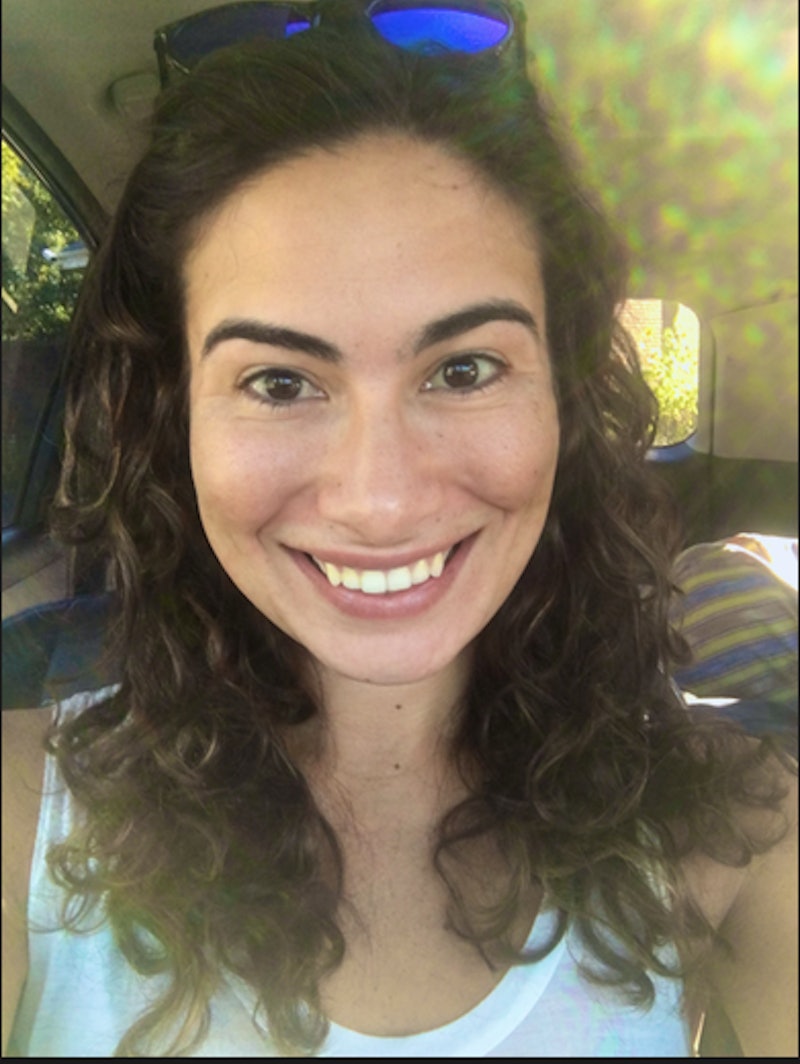 My eyebrows have always been a major source of insecurity for me. I had a big, bushy unibrow until 8th grade (thanks, mom) and used to get mocked in the hallways of my middle school for looking like Frida Kahlo. From the minute I was allowed to get them (or should I say, it) fixed, I've always been absolutely insane about their upkeep. I treat myself to a wax and shaping at one of the best brow bars in NYC like clock work every three weeks, and if one hair is ever out of place or if I have to go an extra few days off of my waxing schedule, I completely freak out. That is, until recently, when I was forced to torture myself with the hell that is growing out your eyebrows.

A month ago, I had what we'll call an "oopsies" with my eyebrows. I was sitting at my computer writing and could feel a rogue hair growing in the wrong direction at the inner edge of my left brow (yes, I'm that in tune with them that I can literally feel it when even a single strand is out of place). Once I realized something was off, I couldn't concentrate on anything else, so decided to just yank that little mthrfker out and get on with my life. No harm done, right?

Because I have no self control and, as I mentioned, severe brow-inflicted anxiety, as I sat there trying to write a post about Kylie's latest lip kits, I decided it would be best to pull out a few more pesky little hairs from around the same spot to even things out. So I grabbed three or four of them with my fingers, flicked them into the nearest trash can and went on with my day (I'm realizing now as I write this that this story is pretty appalling, but bear with me).

When I got home a few hours later, I realized I had made a huge mistake: There, in the center of the eyebrow I had been working so hard at perfecting for the last decade was an enormous bald spot.

I was then faced with a decision: Should I tweeze the other one to match it, or put down the tweezers for good and let the situation settle itself over time with the help of mother nature and some brow gel. I chose the latter, and thus embarked on the six emotional stages of growing out my eyebrows.

After I realized what I'd done, I sat in front of the mirror for a full 15 minutes staring at myself, open-mouthed, trying to mentally process the new, not-totally-there version of my face (I had been crying before I took this picture...). I looked completely lopsided, and it was very clear that there was a significant chunk of hair missing from my left brow. How had I managed to do this to myself? In an attempt to make myself feel better, I tried to shift my focus to an old episode of Keeping Up With The Kardashians (It was the one when they packed Kim's baby shower, Kendall's 21st birthday and Kris's Great Gatsby party all into one episode, so I should have been riveted) but I kept getting up every eight minutes to check to see if the bald spot had gone away. Somehow, it had not.

"It's not that bad," I told myself the next morning while trying to figure out if I could cover up the situation with a black eye pencil so as not to look insane for the entire rest of the day. I sent a picture to my roommate, who is usually pretty honest with me, and she confirmed that it was "barely noticeable." (She was lying.) Choosing to believe her, I went about my day choosing to pretend like nothing was wrong. I got a few concerned looks.

The next day, when I showed my boyfriend what I'd done, I realized my roommate had definitely been lying when she told me things looked totally fine. "Oh wow, how did you do that?" he asked, while silently weighing his options for moving forward in a relationship with a one-eyebrowed woman (thankfully, he decided I had other good qualities that outweigh my effed up brows).

Hoping there was some solution to my problem besides the dreaded "waiting for it to grow out," I headed to the experts at Boom Boom Brow Bar for guidance. When I sat down in the pink bedazzled bar stool, the woman took one look at me and asked, "What did you do to yourself?"

I made up some story about a bad wax over the summer (Don't judge me. I was way too embarrassed to tell her I had done this to myself) and asked if she would be able to fix it.

"I can do my best, but the only thing you can really do is wait and let it grow in."

What a bitch, I thought to myself, completely irrationally.

I was mad at her for not being able to fix what felt like a daily reminder of what a mess I am, but more than that, I was angry at myself for doing something so drastic to my face that I was no going to have to live with for the next three to six months.

She gave me something called Brow Job, and told me if I put it on twice a day it would help with growth. It made me hate her a little bit less.

This was, thankfully, a short phase, which involved looking in the mirror, sighing at what I saw, and vowing never to look in the mirror again. This happened 30 times a day for three days.

Before bed every night, as I applied my Brow Job Gel, I said a little prayer to the hair-growth gods: "If you let my eyebrows grow in faster than the waxer told me they would, I promise I will be a better person and stop lying about what happened here." The verdict is still out on whether or not this actually worked.

It's now been a month, and I've kind of gotten used to the wispy little hairs growing in toward the bridge of my nose. They're coming in slowwwwwly, but I swear they're coming. I've been using the "brow job" (that name though...) religiously, and it's been helping, but I still have a longggg way to go before my face looks even slightly symmetrical again. But you know what? I'm OK with it.

Yes, my mom looked at me over dinner the other night and asked, "why does your face look so lopsided?" but instead of making me cry like it would have a few weeks ago, I just shrugged it off and told her I was letting them grow in. This morning, at my three week wax (trust me, I will never get off schedule again) the waxer commended me for not trimming, tweezing or yanking between appointments, which honestly made me feel like a little bit of a hero.

Trust me, I am fully aware that there are much, much bigger problems in the world than the rate at which my eyebrow is filling in its own bald spot. But after screwing up my face, it did take me a little while to regain confidence in myself and my appearance. What I learned, though, is that nobody besides me really cares about whether or not my eyebrows are uneven, and that actually, it adds a little character.

And until things even out (maybe sometime in 2017?!), I've thankfully learned how to adjust my selfie game.

More like this
30 Rainbow Nail Designs For Pride Month & Beyond
By Summer Arlexis and Audrey Noble
42 Black Owned Fashion & Beauty Brands To Support Today & Always
By Mekita Rivas, Shea Simmons, Kui Mwai and Dominique Norman
23 Times Meghan Markle Dressed Just Like Princess Diana
By Bustle UK
12 Of Halsey's Makeup Looks That Are True Works Of Art
By Paris Giles
Get Even More From Bustle — Sign Up For The Newsletter