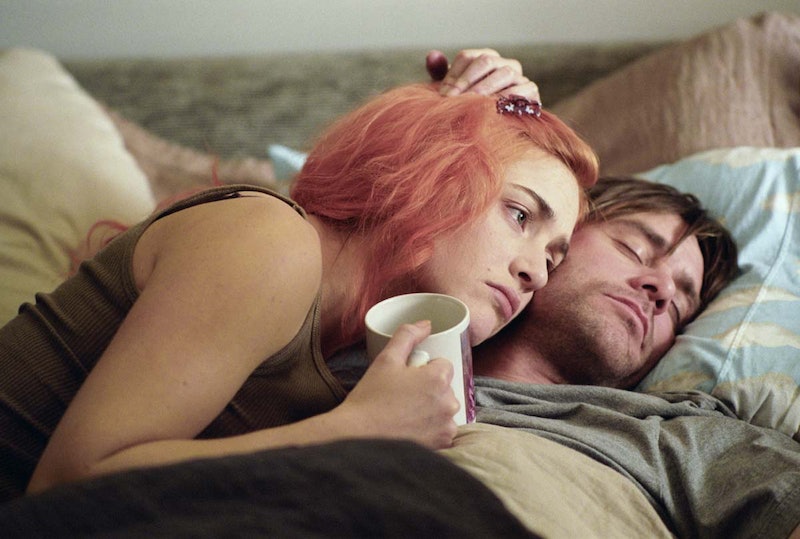 Although they may not even know it, for tweens across the country, today, March 19th warrants a major celebration. Why? Because today is the ten year anniversary of Eternal Sunshine of the Spotless Mind , the acclaimed 2004 drama about a couple who erase each other from their memories. At first, eighth and ninth graders might not seem like the demographic for the film, considering that most of them were barely five years old when it was released. Yet if one just takes a quick glance at Tumblr, you'll see that Eternal Sunshine gets the same kind of reverence as One Direction tributes and screenshots from Sherlock, with thousands of notes and reblogs from users across the globe. Whether it's because the quotes are deep, the photos are pretty, or tweens just really have a thing for Jim Carrey, who knows; all that's clear is that at least where Tumblr is concerned, Eternal Sunshine will live on forever.

Seeing as the film (or at least its Tumblr gifs) is so popular with the middle school set, one can only imagine what it's teaching them about life. While Eternal Sunshine may be great, it's also pretty angsty. Erasing memories, broken relationships, the symbolism of Clementine's constantly changing hair — call it "cerebral," "existential," or whatever you want, but it's all just a synonym for belated teenage angst. And so for all the fourteen and fifteen year olds reblogging the movie's quotes and images every time they appear on their dash, Eternal Sunshine probably feels like it's speaking right to them. Here are some of the lessons we imagine Tumblr's tweens are taking away from Eternal Sunshine:

1. The "Nothing is Important" Lesson

Life? Meaningless. Everything can be taken apart, and even the most beautiful things are really just worthless, overrated figments of our imagination.

People have flaws. But tween-age Tumblr users, that doesn't mean you should go out of your way to be crazy/annoying/difficult, got it? It may be attractive in movies, but in real life, being likable tends to win out.

3. The "Valentine's Day is Pointless" Lesson

It appears Tumblr needs a serious introduction to "Galentine's Day," because this series of photos has far too many notes than is acceptable.

Sure, Clementine had issues. But that didn't mean that her relationship with Joel was doomed to fail from the start.

5. The "Manic Pixie Dream Girls Are the Worst" Lesson

Unlike the others, this takeaway is actually pretty great. Eternal Sunshine combatted the "manic pixie dream girl" trope before it was even popular.

6. The "Adulthood is Bad, So Avoid It" Lesson

To be fair, judging from Eternal Sunshine, adulthood doesn't look so good. Relationships get complicated, people get mean, and occasionally, memories get erased. That doesn't mean that it's not worth pursuing, though, okay?

7. The "I HAVE SO MUCH ANGST AND I DON'T KNOW WHAT TO DO ABOUT IT" Lesson

Breathe, Tumblr. It gets better.

And please, for all of our sakes, just watch the actual movie already. No amount of Tumblr gifs, however well-intentioned, can do Eternal Sunshine justice.