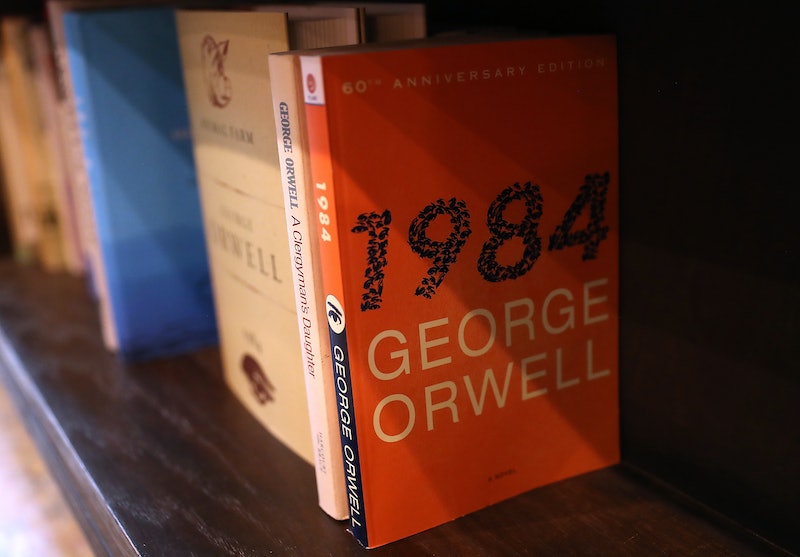 There are plenty of compulsory books that, once finished, we quickly check off our syllabi, never to open again (for me, The Scarlet Letter quickly comes to mind; no offense to Mr. Hawthorne, but once was definitely enough). Some of those titles, however, get the unfair permanent-shove-into-the-corner and deserve a second read — there's a lot more to them than stale prose and plotlines of drab courtships gone awry. Whether at the time you were too focused on an upcoming quiz to enjoy the tomb for pleasure, or you SparkNoted your way through the end, here are five “required reading” books that are well worth dusting off (or, erm, downloading).

Most likely, the big discussion surrounding Adventures of Huckleberry Finn when you read it in school was the theme of race, played out through the unlikely friendship that develops between Huck Finn, a white lower-class boy, and Jim, a black runaway slave. The second time you give Huckleberry Finn a go, you might realize it’s also 1) really quite funny, and 2) about questioning authority and the status quo. When Huck decides to save Jim, even though to his knowledge he’s acting against God, he realizes that he doesn’t care what anyone thinks anymore: “All right, then, I'll go to hell.” Between the lively dialogue and use of dialect, the spunky characters, and the countless adventures of Huck and Jim, this novel will always make you laugh, and always make you think.

“H'aint we got all the fools in town on our side? And ain't that a big enough majority in any town?”

It definitely makes sense that 1984 is required reading, but it’s arguably even more terrifying and eye-opening to reread it as an adult, especially when you come to the realization that Orwell’s “telescreen” isn’t all that different from the recent NSA spying, that “Doublethink” isn’t far from the selective memory of most politicians today, and that “Newspeak” even kind of reminds you of the abbreviated texts you’ve been sending. (Am I a little too paranoid? Probs.) This book will scare you all over again, and it should. Just remember: “Big Brother is Watching You.”

The Catcher in the Rye by J. D. Salinger

People who’ve read The Catcher in the Rye often have a visceral reaction to Salinger’s main character, Holden Caulfield. When I first read the book in 11th grade, I found him whiny and annoying. When I reread it the summer after I graduated from college, I was so moved that I hugged the book when I finished. Depending on when you read The Catcher in the Rye, your ability to relate to Holden, who values integrity above all else, will inevitably change. It’s an excellent book to revisit if you’re pondering a career change, thinking about going back to school, or just feeling a little lost, as you do from time to time.

“I am always saying ‘Glad to've met you’ to somebody I'm not at all glad I met. If you want to stay alive, you have to say that stuff, though.”

Pride and Prejudice is a beautiful love story, but its razor-sharp satire and delightfully British humor is often missed the first time it’s read in high school. Austen’s characters are rich and complex, and characters like Elizabeth’s father and Mr. Collins in particular provide excellent comedic relief. Plus, the allure of the Cinderella-esque romance between Elizabeth and Mr. Darcy never fades (and I’m not just saying that because I recently wanted the Colin Firth version again). Best of all, Pride and Prejudice has a genuinely happy ending, which is something we all need once in a while.

“We all know him to be a proud, unpleasant sort of man; but this would be nothing if you really liked him.”

The Outsiders by S. E. Hinton

Hinton wrote The Outsiders when she was only 17, leading many to deem the book as one written “about teenagers, for teenagers, by a teenager.” It’s easy to see why kids can relate to the candid, thoughtful point of view of 14-year-old Ponyboy, but rereading The Outsiders gives readers a chance to revisit often taboo topics like male friendship, masculinity, violence, and class through the eyes of an adolescent boy. It’s the kind of book you should reread once in a while if you want to remember what it's like to be a teenager, or in the words of Johnny Cade, if you want to just “stay gold.”

“I've been thinking about it, and that poem, that guy that wrote it, he meant you're gold when you're a kid, like green. When you're a kid everything's new, dawn. It's just when you get used to everything that it's day.”