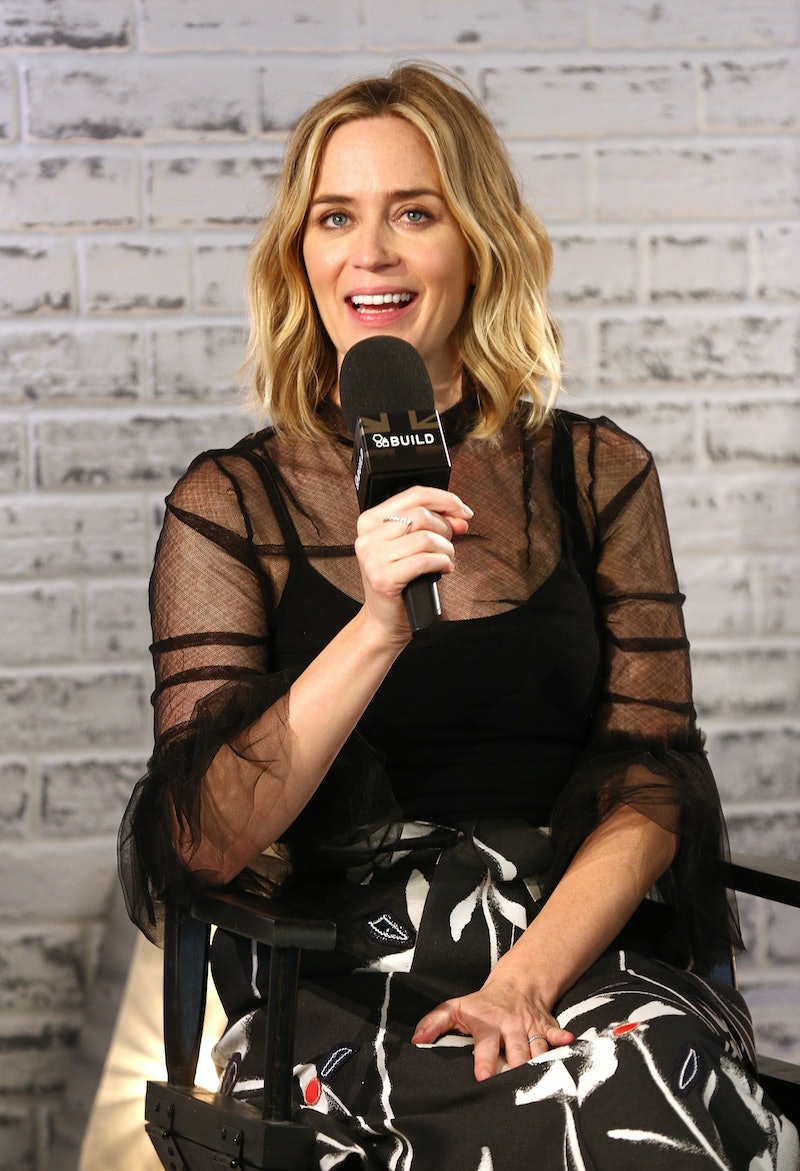 Just when you thought you knew everything you possibly could know about your (pretend) BFF Emily Blunt, the beyond wonderful actress goes and reveals something major like this. As well as being a spectacular actress, wife to the eminently dreamy John Krasinski, mother to two adorable children, and a helluva singer (as evidenced during her standout turn in Into The Woods), it feels like there's little more we need to know about Blunt — except for one tiny (but mighty) detail from her past: Blunt almost became Britain's answer to Britney Spears. That's right, the Sydney Morning Herald discovered during an interview with the actress that there was a brief moment, aged 18, when Blunt nearly became the next big pop superstar.

In the interview, Blunt explains that though she'd just landed her first agent who was interested in starting an acting career for her, that she also had a music teacher nudging her in the different direction of a music career. In fact, the latter option was so close to happening that she'd even signed a recording contract and cut a demo. So what happened to swing her path to the career she currently has? Blunt explained:

I was 18 and I was just, well, you know, I was 18. I was at that stage of my life where I was like, 'Who cares, yeah, maybe; that sounds cool'. Everything sounds cool other than being in school at 18 ... But then I got terrified and pulled out because I felt they were wanting me to be like Britney Spears ... And I was like, 'I can't dance, and I don't sing like Britney Spears'. I just felt it was snowballing too fast and it wasn't ultimately what I wanted to do.

Born in 1983, Blunt would have been 18 in the year 2001, which was peak time in Spears' career — so it's understandable that a record company would be pushing to imitate the superstar's success in some way. But this is Blunt we're talking about, and though the music industry may not have recognized that she was a mega superstar in the making by her own merits, it's clear that she certainly is one now.

But I know what you're all thinking, because it was also exactly my first question when I first heard about this wondrous discovery — where can I listen to Blunt's pop music demo? In the same interview with the Sydney Morning Herald, when questioned whether the general public would ever be permitted the sheer joy of hearing this elusive demo, Blunt responded, "I hope not. ... It was a pop song and it seems so unlike me now. It's like a different person." So, that's a no then? Dang.

And I hate to say, but I've also been scouring across the internet in search for any leads that could direct me toward even just a few seconds worth of Blunt's 2001 pop music demo, and I've found nothing. Not a scrap. Sorry guys, but it looks as though we're not going to be able to hear the lucrative beginnings of Blunt's abandoned pop music career. At least, not for the time being. But I live in hope that sometime soon, some kind soul will unleash that beauty onto the internet for us all to enjoy and I have no doubt that it will be quite the treat if and when that should ever happen.