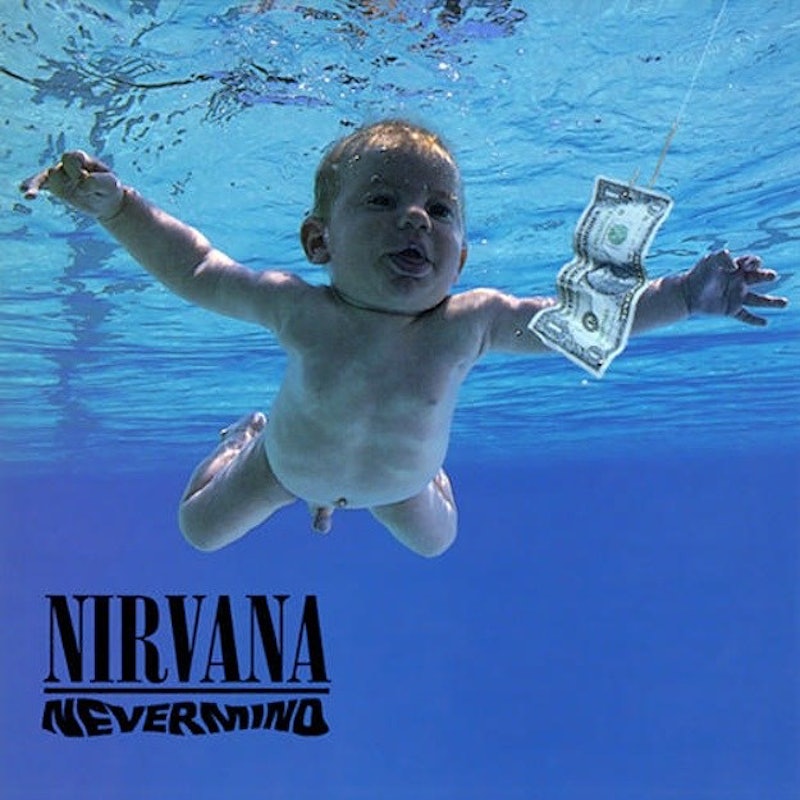 There are a few album covers that come to mind when I think in terms of "most memorable," but perhaps none, at least in the last couple decades or so, are as staying as Nirvana's Nevermind. That cover famously featured a naked baby in a swimming pool, reaching for a dollar bill, and it's become one of the most iconic images in music. Unsurprisingly, that baby (who's now a total grown-up) is, today, fully aware of the image's perseverance and longevity, and so for the album's 25th anniversary, Spencer Elden, AKA, "Nirvana baby," recreated the Nevermind album cover.

I know what you're thinking... a grown dude got naked, hopped in a swimming pool, and let someone take a (sort of) full frontal picture all in the name of pop culture nostalgia? That's bold. Don't get ahead of yourself there, though. Yes, Elden did a Nevermind cover do-over, but this time he was not nude for the photoshoot — although the New York Post explains it wasn't because he didn't want to be. The publication states that he "wanted to go au naturel," but he didn't out of respect for the person taking his picture. As Elden revealed to the Post, "I said to the photographer, 'Let’s do it naked.' But he thought that would be weird, so I wore my swim shorts." You have to give the guy credit for being committed to his craft, that's for sure.

In the name of honoring the past in more ways than birthday suiting it up for the Nevermind cover, the Post relays that, "The shoot lasted 15 seconds and Elden’s parents made only $200, his dad told NPR in 2008. Earlier this month, the photographer John Chapple paid him $200 to do it again." So really, everything except for Elden's swim trunks makes this recreation truly authentic and a proper tribute, one that fans will undoubtedly appreciate. In fact, you can appreciate it for yourself by checking the image out below:

See? No punches were pulled here. "Nirvana baby" obviously takes his modeling quite seriously these days.