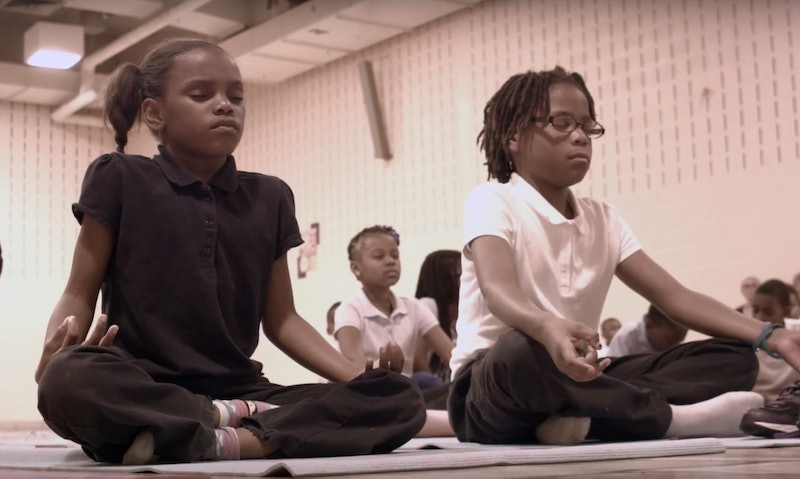 “Quiet reflection” may not be a phrase you typically associate with children, but one school program shows that yoga and deep breathing might be just what some kids need to thrive. In Baltimore, Robert W. Coleman Elementary School has replaced detention with mediation. The kids are loving it, and the switch has been so successful that, in the last year, the suspension rate has dropped all the way down to zero. Yes, zero.

When students at Robert W. Coleman Elementary act out, they don’t go to detention or the principal’s office. Instead, they head to the Mindful Moment Room, a classroom filled with purple beanbags and pillows. There, they practice deep breathing exercises, and learn how to diffuse stress and anger through meditation and mindfulness. The school created the room with the help of the Holistic Life Foundation (HLF), a nonprofit organization founded in 2001 that promotes wellness among underserved kids and adults. The school also takes part in an HLF-run afterschool program called “Holistic Me,” in which students learn about yoga and mindfulness. “It's amazing,” Kirk Philips, the Holistic Me coordinator at Robert W. Coleman, told Upworthy. “You wouldn't think that little kids would meditate in silence. And they do.”

The results of the Mindful Moment Room and Holistic Me have been very positive: Robert W. Coleman Elementary had no suspensions in 2015, and none so far this year, and a local high school that also teaches mindfulness with HLF has similarly seen a boost in attendance and a decrease in suspensions.

Testimonials on the Holistic Life Foundation website also speak to the impact that the programs has had on students. “Sometimes when I get mad I just breathe deep,” explains one fifth grader,

… I just, like I picture me being in a certain place I like, and I just thought I could overcome everybody and then I just stop being mad…I think of being a bigger person and doing something maybe a wise man would do… I think of something that a stronger, a mentally stronger person would do.”

Another student notes, “This morning I got mad at my Dad, but then I remembered to breathe and then I didn’t shout.

The positive benefits of yoga and mindfulness training extend beyond the students themselves. HLF co-founder Andres Gonzalez told Oprah Magazine in August that the program has helped to reverse a cycle of stress that exists in many households. He said,

That's how you stop the trickle-down effect, when Mom or Pops has a hard day and yells at the kids, and then the kids go to school and yell at their friends. We've had parents tell us, ‘I came home the other day stressed out, and my daughter said, Hey, Mom, you need to sit down. I need to teach you how to breathe.’”

The Holistic Life Foundation was founded fifteen years ago by Gonzalez and brothers Atman and Ali Smith. Now, they have many of their own former students working for the foundation and teaching a new generation of baby yogis. “The first HLF students are now men, and they’re becoming our workforce,” Atman explained to Yoga Journal last year. “About 50 percent of our workforce is former students. The program meant so much to them that they want to give back, and they’re earning a living doing so. It’s a beautiful evolution.”

The Holistic Life Foundation is based in Baltimore, but it hosts workshops and other programs all over the country. You can find out more about HLF here.